In Kazakhstan, the active phase of the tactical-special exercise "Cobalt-2018" took place, during which the illegal armed formations were "defeated" On May 22, 2018, on the basis of the Center for Combat and Methodical Training of Special Forces Units of the National Guard of the Republic of Kazakhstan, an active phase of the Cobalt-2018 tactical and special exercises was held, with the formation of special forces of the Collective CSTO forces.

According to the plan of the exercise, joint actions of collective forces to destroy illegal armed formations were tested.

More than 700 military personnel, more than 70 units of military and special equipment, as well as up to 5 units of aviation equipment were involved in large-scale maneuvers. More than 500 units of small arms and artillery weapons. Actively used for reconnaissance unmanned aerial vehicles. In the period of the active phase of the exercise, the grouping of forces and means of the Federal Service for Social Security of the CRRF was managed while conducting the special operation itself. A feature of the current exercise was the creation of a single operational headquarters for the management of this exercise.

In addition, for the first time, a command-staff training session was conducted with security agencies that are part of the formations of special-purpose forces.

The main objectives of the exercise were: - increasing the coherence of the governing bodies of the formations of the special forces of the CSTO member states;

- working out and improving joint skills in the management of forces and means in the preparation and during the conduct of a special operation to destroy illegal armed formations;

- improving the level of field training and the coherence of the actions of the forces and means of the collective security system, the development and mastering of new forms, ways to accomplish tasks for the purpose, as well as modern weapons, military and special equipment, special means.

At the initial stage of the exercise, the formation and deployment of a group of forces and means of formations of special purpose forces of the Collective Rapid Reaction Forces (CRRF) of the CSTO in the area of ​​mission and the planning of a special operation took place.

In general, the exercises were held at a high organizational level, the Federal Service for Social and Social Development of the CRRF CSTO showed high combat readiness and professionalism. The CSTO Secretary General Yury Khachaturov said this in his speech at the closing of the exercise .

“Today, the tactical-special exercise“ Cobalt-2018 ”with the formation of special operations forces has been successfully completed. Great work has been accomplished, combat training tasks for countering terrorist organizations have been successfully worked out.This is a serious preparation for combat work, if necessary, the use of our collective forces, said the CSTO Secretary General, ”said Yuri Khachaturov .

He stressed that the National Guard of Kazakhstan and its management team took seriously the need to conduct and prepare the exercises. “For the first time, the Operational Headquarters of the special forces was formed and deployed on a good material and technical base,” the CSTO Secretary General noted. He also noted that “ while we are in the Republic of Kazakhstan, we plan to solve several important tasks, namely, to hold regular intersessional meetings of the Council of Ministers of Defense and the Committee of Secretaries of the CSTO Security Councils in Astana, which are scheduled for May 23 and 24”. “The structure and staff of the management body of Formation of special forces will be submitted for consideration and approval of the upcoming meeting of the CSTO Security Council Secretaries Committee,” added Yuri Khachaturov .

He further noted that given the fact that the fight against terrorism is a priority of the Organization, it was important to work out joint actions of special forces of the states during the special operation in the Central Asian region. 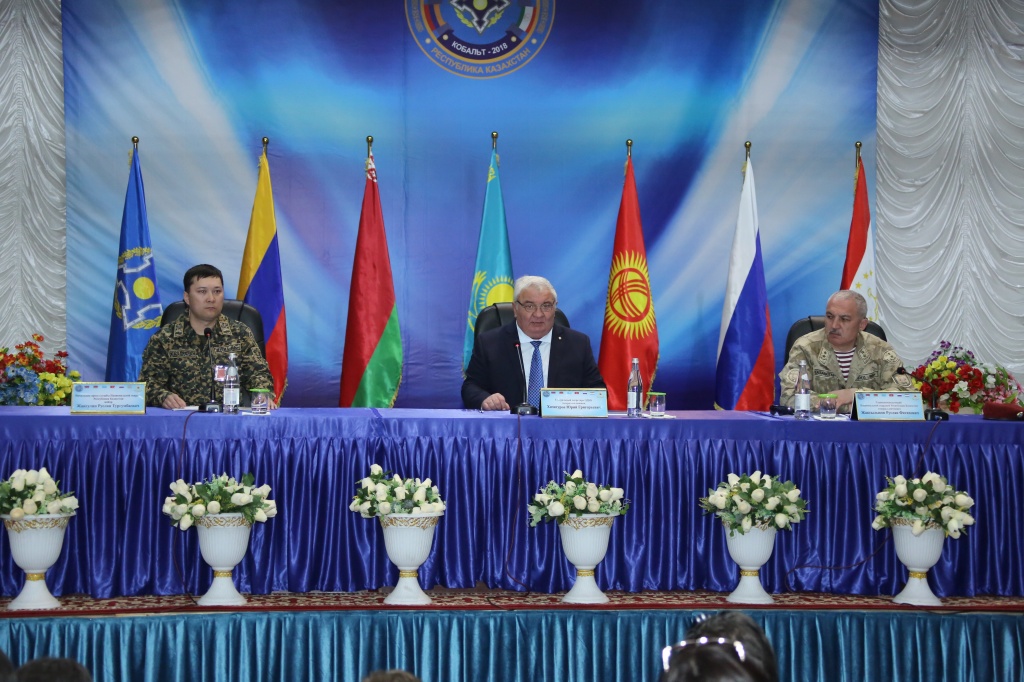 Then he thanked all the representatives of the CSTO member states for their active participation in the exercises, especially noting the leadership of the National Guard of the Republic of Kazakhstan for perfectly created conditions in organizing the event.

"The technical base of the training center of the National Guard of Kazakhstan fully meets modern requirements for preparing for action in the real combat situation of special-purpose units ," the CSTO Secretary General summarized.

At the closing of the exercise, the best fighters of the special forces of the Organization's member states were awarded the CSTO Secretary General with the medal "25th Anniversary of the Collective Security Treaty", departmental awards of the Ministry of Internal Affairs and the National Guard of the Republic of Kazakhstan, as well as valuable gifts. “Today, the CSTO has real capabilities to  solve the set tasks. Over the years, the organization has established itself as an authoritative and effective regional structure. A wealth of experience has been accumulated on the principles of partnership, openness, mutual respect and trust,” concluded the Cobalt-2018 exercise  at the close. "CSTO Secretary General Yuri Khachaturov .