On November 8, a session of the CSTO Collective Security Council was held in Astana and a joint meeting of the CFM, the CMD and the CSSC of the CSTO was held 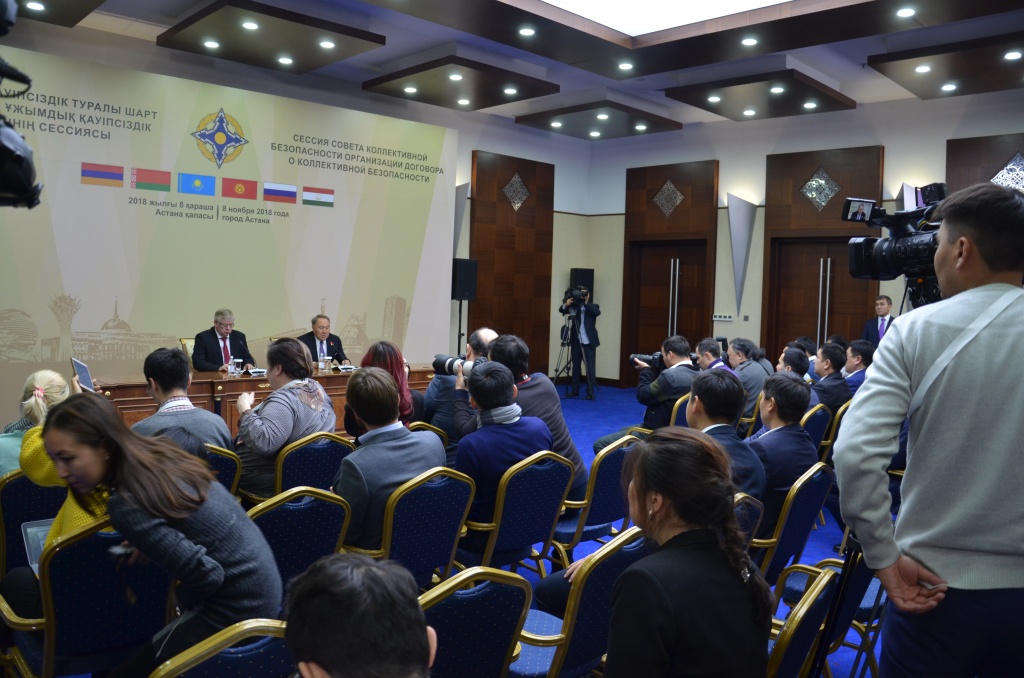 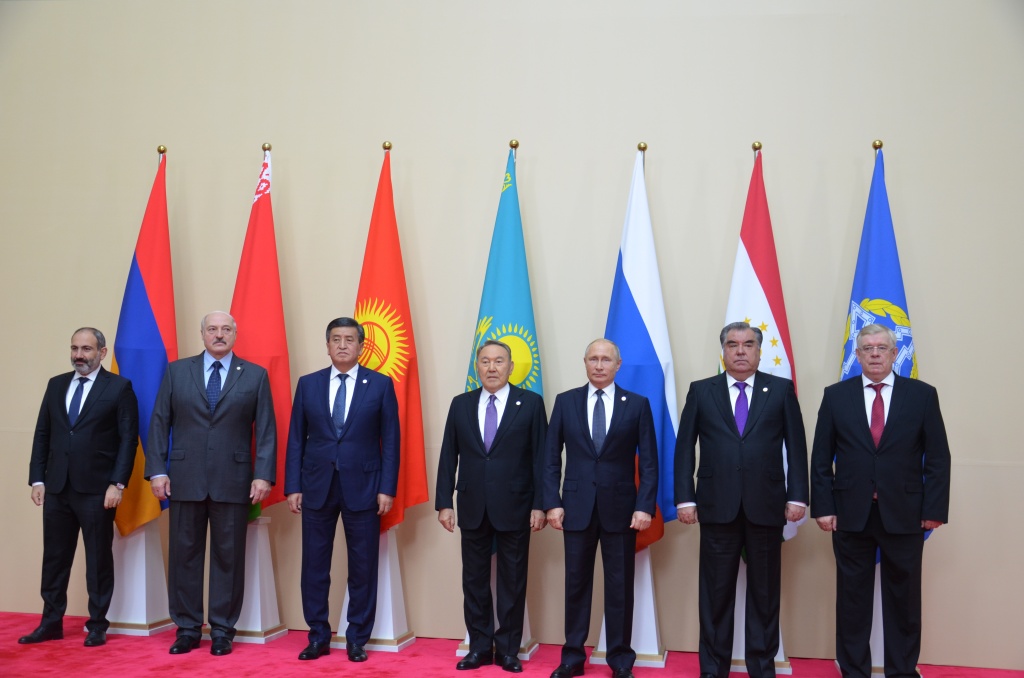 The heads of state discussed the problems of international and regional security, the improvement of mechanisms for countering challenges and threats, and the development of the military potential of the Organization. The Declaration of the Collective Security Council was adopted, which reaffirms the determination to continue to coordinate the foreign policy positions of the CSTO member states and ensure the achievement of the goals of the Organization for the consolidation of peace and creating favorable conditions for the comprehensive development of our countries,


stresses the need to strengthen the central role of the UN in international affairs and the primary responsibility of its Security Council for maintaining international peace and security and reaffirms its commitment to the principle of equal and indivisible security, expresses concern about the current situation around the Medium Missile Treaty range and shorter range due to US declarations of intent to withdraw from it. A decision was made on the legal registration of the status of the Observer to the CSTO and the status of the Partner of the Organization, and an Action Plan for the development of a coordinated information policy was signed. 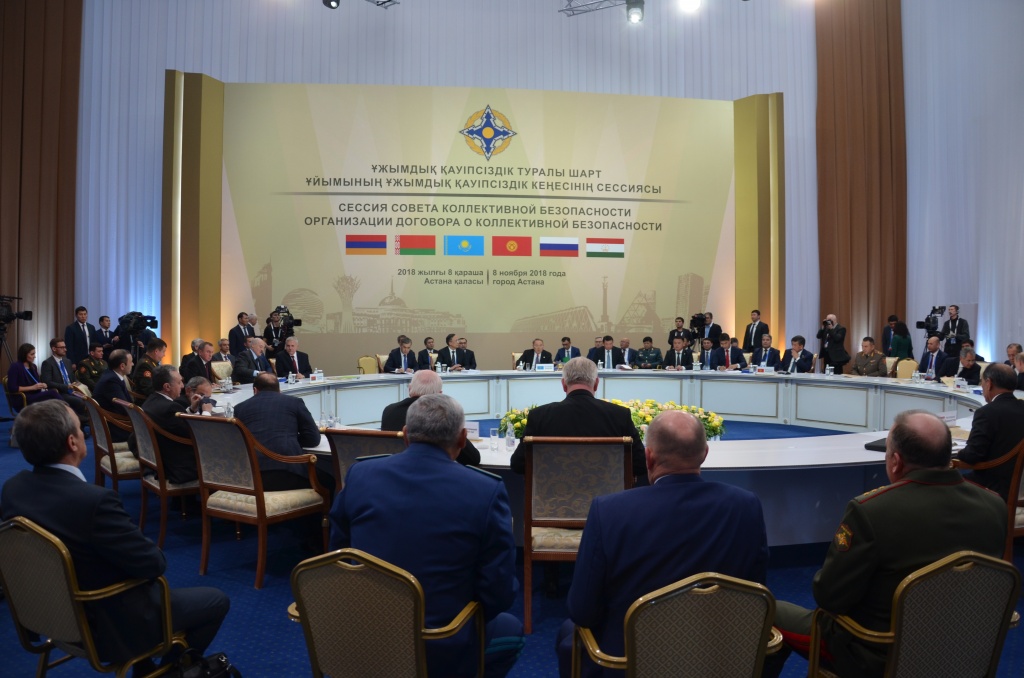 November 8th of this year. The session of the Collective Security Council (CSC) of the Collective Security Treaty Organization was held in Astana. The CSC includes the heads of the CSTO member states: Armenia, Belarus, Kazakhstan, Kyrgyzstan, Russia and Tajikistan. During the intersessional period of 2017-2018, the CSTO was chaired by Kazakhstan. The session was opened by the President of the Republic of Kazakhstan, Nursultan Nazarbayev. During the session, the Republic of Armenia was represented by Acting Prime Minister Nikol Pashinyan. The heads of state discussed a number of issues in a narrow format. The remaining agenda items were discussed in plenary session, which was attended by the foreign ministers, defense ministers and secretaries of the security councils of the CSTO member states, as well as the Acting Secretary General of the Organization, Valery Semerikov. 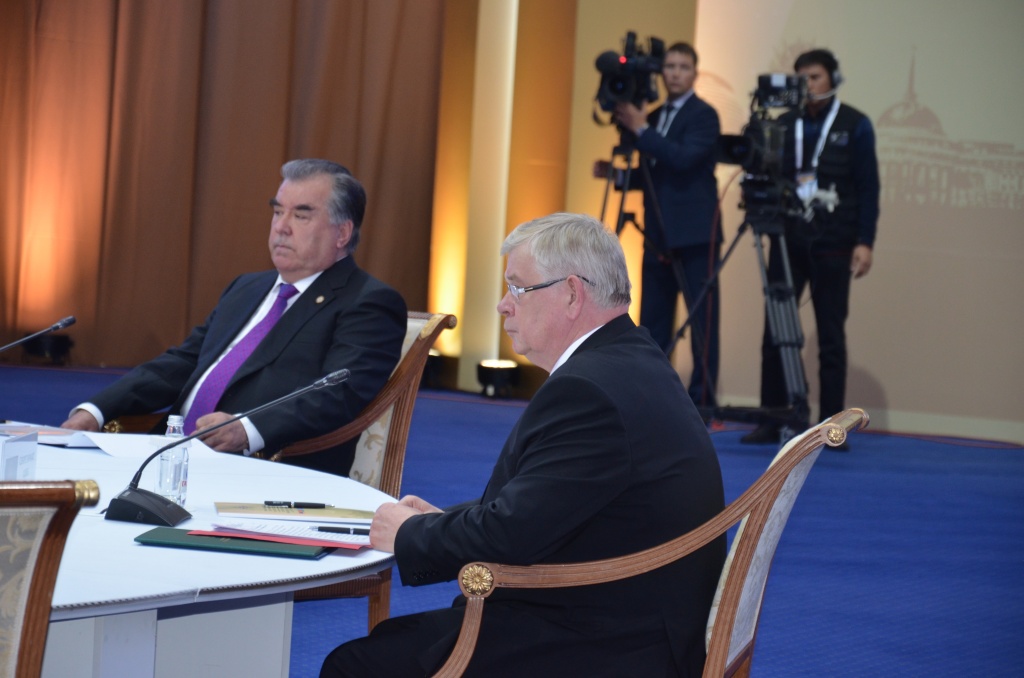 Before the CSC session, a joint meeting of the Council of Ministers of Foreign Affairs, the Council of Ministers of Defense and the Committee of Secretaries of the Security Councils of the Organization was held, during which 24 issues were discussed, 15 of which, after approval, were submitted for consideration by the heads of state. The CSC members discussed the problems of international and regional security, the interaction of the CSTO member states in the format of the Organization and in the international arena. The Declaration of the CSTO Collective Security Council was adopted, which reaffirms the determination to continue to coordinate the foreign policy positions of the CSTO member states and to ensure the achievement of the Organization’s goals of strengthening peace and creating favorable conditions for the comprehensive development of our countries, stresses the need to strengthen the central role of the UN in international affairs and the primary responsibility of its Security Council for maintaining international peace and security, and reaffirms its commitment to the principle of equal and indivisible security, expresses concern at the current situation around the Treaty on the Elimination of Medium-Range and Shorter-Range Missiles in connection with US declarations of intention to withdraw from it. In his speech at the meeting in an expanded format, the President of the Republic of Kazakhstan, Nursultan Nazarbayev, spoke about the results achieved by Kazakhstan’s chairmanship of the Collective Security Treaty Organization. 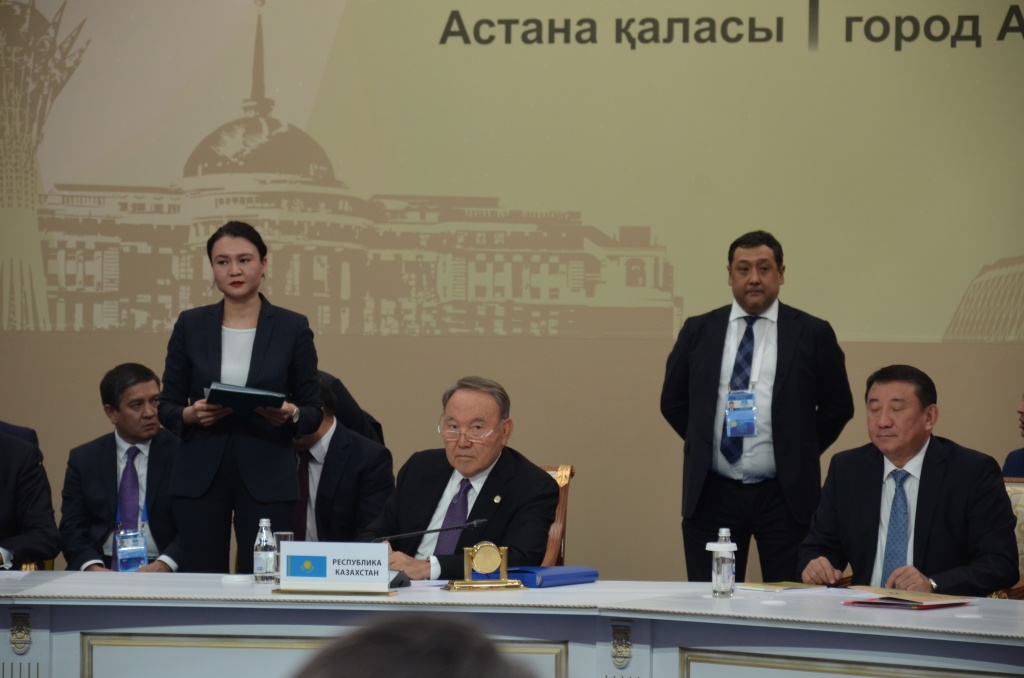 - Kazakhstan considers the CSTO as an authoritative and effective structure. With the active and comprehensive support of the Member States, the priorities of Kazakhstan in chairing were successfully implemented this year, Nursultan Nazarbayev said.

The President of Kazakhstan noted that on a planned basis in the military sphere, activities were completed to reform the joint headquarters of the CSTO and to prepare for the full functioning of the CSTO Crisis Response Center. In addition, the Head of State spoke about the results of the exercises "Combat Brotherhood-2018", held in Kyrgyzstan.

“At the meeting of the intergovernmental commission of the CSTO on military-technical cooperation, the Coordination Council on Standardization of Weapons and Military Equipment was also created,” said the President of Kazakhstan.

Nursultan Nazarbayev stressed that during the presidency, Kazakhstan’s initiative to adopt a universal code of conduct to achieve a world free of terrorism, which was approved by more than 70 countries, was implemented.

The head of state also spoke about the results of joint work on countering cyber-threats and combating drug trafficking.

In conclusion, the President of Kazakhstan informed about the decision taken on the legal consolidation of the status of the CSTO partner and the observer of the Organization.

Following the meeting, a statement was adopted by the heads of state of the CSTO member states on coordinated measures against participants in armed conflicts on the side of international terrorist organizations. 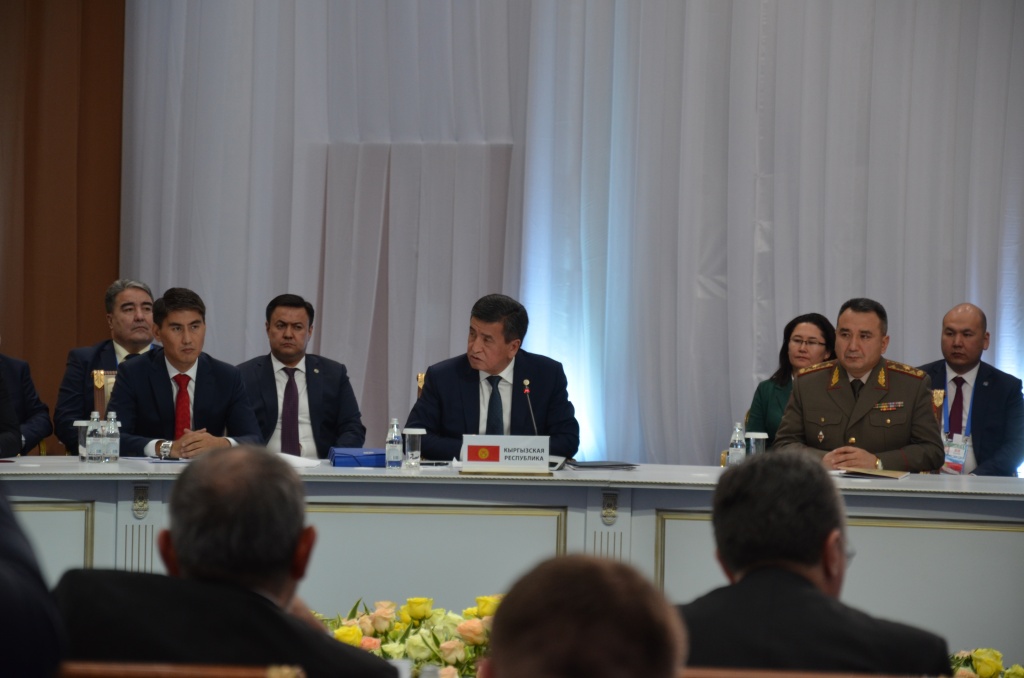 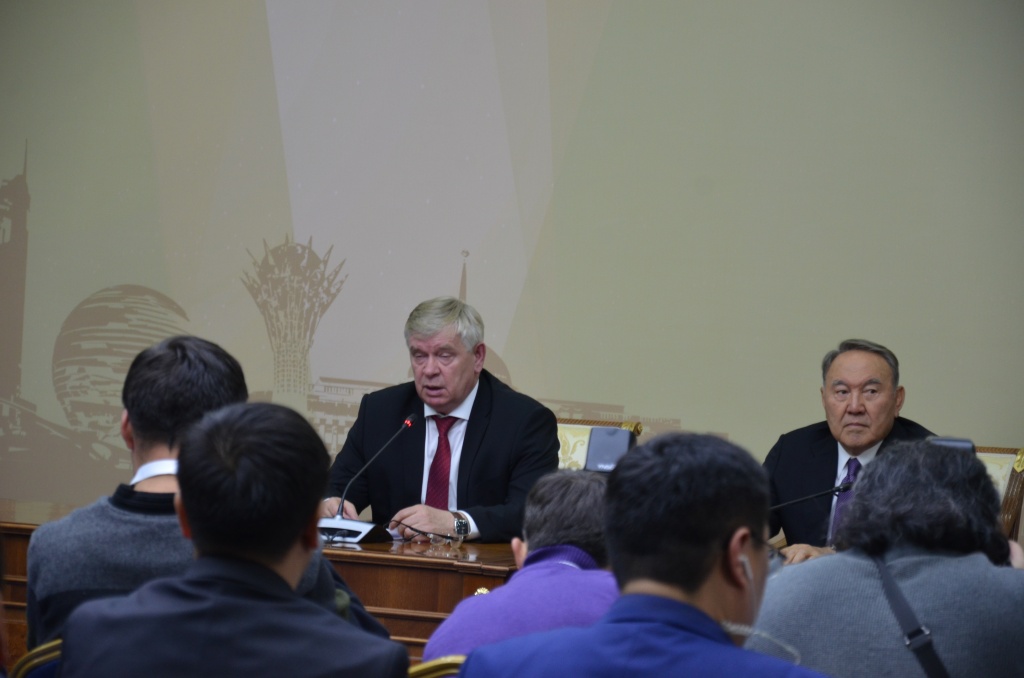 Decisions were also made on some issues of further improving the military component of the Organization and changes were made to the Regulations on the Coordination Council of the heads of the competent authorities to combat drug trafficking in the CSTO member states.

The CSC decided on financial support for the activities of the CSTO working bodies in 2019.

Considering that in 2018-2019 The CSTO chairmanship passed to the Kyrgyz Republic, President Sooronbay Jeenbekov announced the priorities of Kyrgyzstan during the session for the next intersessional period.

Kyrgyzstan will make every effort to further enhance the capacity of the CSTO and improve the image of the Organization in the international arena,” said Kyrgyz President Sooronbay Jeenbekov. He expressed gratitude to the Kazakh side for the effective chairmanship of the CSTO, as well as to President Nursultan Nazarbayev for organizing the meeting and warm welcome.

“In a narrow format, we discussed a number of important issues relating to current problems of regional and international security. Following today's meeting, the chairmanship of the CSTO for the next intersessional period passes to the Kyrgyz Republic. In this regard, I want to assure everyone that the Kyrgyz side will make every effort to further enhance the capacity of the Organization and improve the image of the CSTO in the international arena, ”Sooronbay Jeenbekov said.

According to him, the growing uncertainty in international politics, the persistent hotbeds of tension in the world, especially in the Middle East and Afghanistan, continue to have a negative impact on regional security. In this regard, he highlighted the role of each of the Organization's member states in ensuring overall defense capability.

“At the same time, the terrorist threat is not decreasing, the volumes of illegal drug trafficking, illegal migration, and crimes in cyberspace remain high. All this dictates the need to continue the active interaction of the Organization's member states, including in terms of foreign policy coordination. In this context, further collective efforts need to be focused on the most pressing issues. It is from this that our priorities in the chairmanship proceed, ”said the president and presented them to his colleagues.

The second. Completion of legal clearance and transition to the day-to-day operation of the CSTO Crisis Response Center. Adjusting the mechanism of its interaction with the crisis response centers of the member states.

Third. In the field of coalition military construction it is necessary:
- development of a legal basis for the formation of material stocks in the territories of member states;
- Improving the preparation and use of the CSTO Collective Forces.

Fourth. In the field of military-economic and military-technical cooperation:
- further development of cooperation cooperation between enterprises and organizations of defense industries in the interests of ensuring mutual deliveries of military products;
- creation of service centers for the repair and maintenance of weapons and military equipment.

The fifth. In the area of countering modern challenges and threats:
- continuation of measures for the formation of a common antiterrorist space within the framework of the CSTO;
- continuation of work on the formation of the Unified List and the register of organizations recognized as terrorist and extremist in the CSTO member states;
- promotion in the CSTO format of measures to implement the UN Global Counter-Terrorism Strategy;
- noting the intensification of hotbeds of tension along the perimeter of the borders of the CSTO member states, to support efforts to promote an inter-Afghan peaceful political dialogue;
- improvement of operational cooperation in identifying, preventing and suppressing the use of information and communication technologies for terrorist and extremist purposes. The sixth. In the field of information support of the CSTO activities, continue activities on the formation and development of a positive image of the Organization.

“I am sure that the designated areas are in the interests of all the CSTO member states and will serve to strengthen our collective security in the current realities of the modern world. Objective circumstances in the world require the adoption of concerted and mutually beneficial decisions on a wide range of issues. Collective efforts are important in ensuring security not only in the interests of the well-being of the Organization’s member states, but also of the countries of our vast region. I consider it expedient to consistently expand the cooperation of the CSTO with interested states and international structures. I hope for your support and constructive cooperation during the presidency of the Kyrgyz Republic, ”S. Jeenbekov concluded.

Acting Secretary General of the CSTO, Valery Semerikov, in his speech at a press conference following the CSC meeting, noted that during the session, the heads of the CSTO member states exchanged views and discussed a wide range of global and regional security issues.

"I have to say that a lot of attention was paid to the ambitious priorities that were taken by the Kazakh side during the presidency. Today it was stated by the heads of state and all participants that these priorities were successfully implemented. We had a lot of practical activities in Kazakhstan. to say that all the activities that took place - this exercise, special operations, training camps and command-staff trainings were held at a very high level, had their specific results Ata and the effectiveness of capacity-building ", - said at a press briefing, Deputy Secretary General of the CSTO.

Valery Semerikov added that in order to further improve the work on military-economic and military-technical cooperation, many tasks were set.

“It should be noted that the heads of state reviewed and signed a whole package of documents on the legal framework of the institution of partnership with the CSTO and the institution of the observer. This will give us a further impetus to work with third countries. - said the Acting Secretary General of the CSTO.

In connection with the early termination of the powers of the representative of Armenia Yuri Khachaturov at the post of Secretary General of the CSTO on the initiative of the Armenian side, the Collective Security Council considered the issue of appointing a new candidate for the post of the highest administrative and official of the Organization. The President of Kazakhstan, Nursultan Nazarbayev, at the final press conference announced that the discussion of this issue will continue on December 6, 2018 in St. Petersburg at the next meeting of the heads of the CSTO member states.