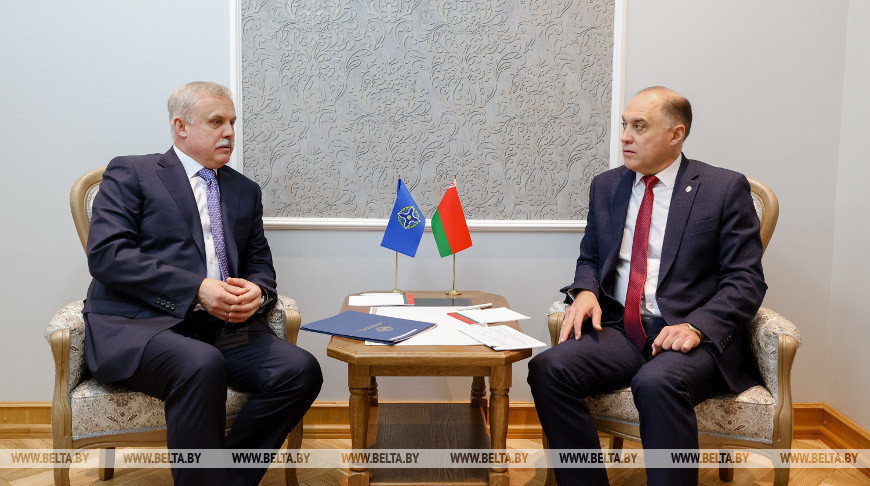 On January 27, 2022, the Secretary General of the Collective Security Treaty Organization Stanislav Zas met with the State Secretary of the Security Council of the Republic of Belarus Alexander Volfovich.

An exchange of views took place on current events in international and regional security. Stanislav Zas positively assessed the actions of the Belarusian peacekeeping contingent in Kazakhstan. The issues of the participation of the Republic of Belarus in the activities of the Organization, the implementation of the decisions of the last sessions of the Collective Security Council and meetings of the statutory bodies of the CSTO, as well as planned events in 2022 were discussed.

The CSTO Secretary General thanked the Belarusian side for the promptness of decision-making and their implementation.

State Secretary of the Security Council of the Republic of Belarus Alexander Volfovich focused on the fact that Belarus today acts as an outpost in the Eastern European region of collective security, counteracting the entire spectrum of modern risks, challenges and threats. "Along with the sanctions, the military-political situation is aggravating, the external force presence near the Belarusian borders is increasing, the militarization of neighboring European countries is in full swing. With this in mind, additional measures are being taken to ensure the security of Belarus, maintain peace and stability in the region. In the power bloc, the countries are carefully analyzed events that took place in Kazakhstan, in order to timely prevent, identify, immediately and adequately suppress attempts by external influences," he said.