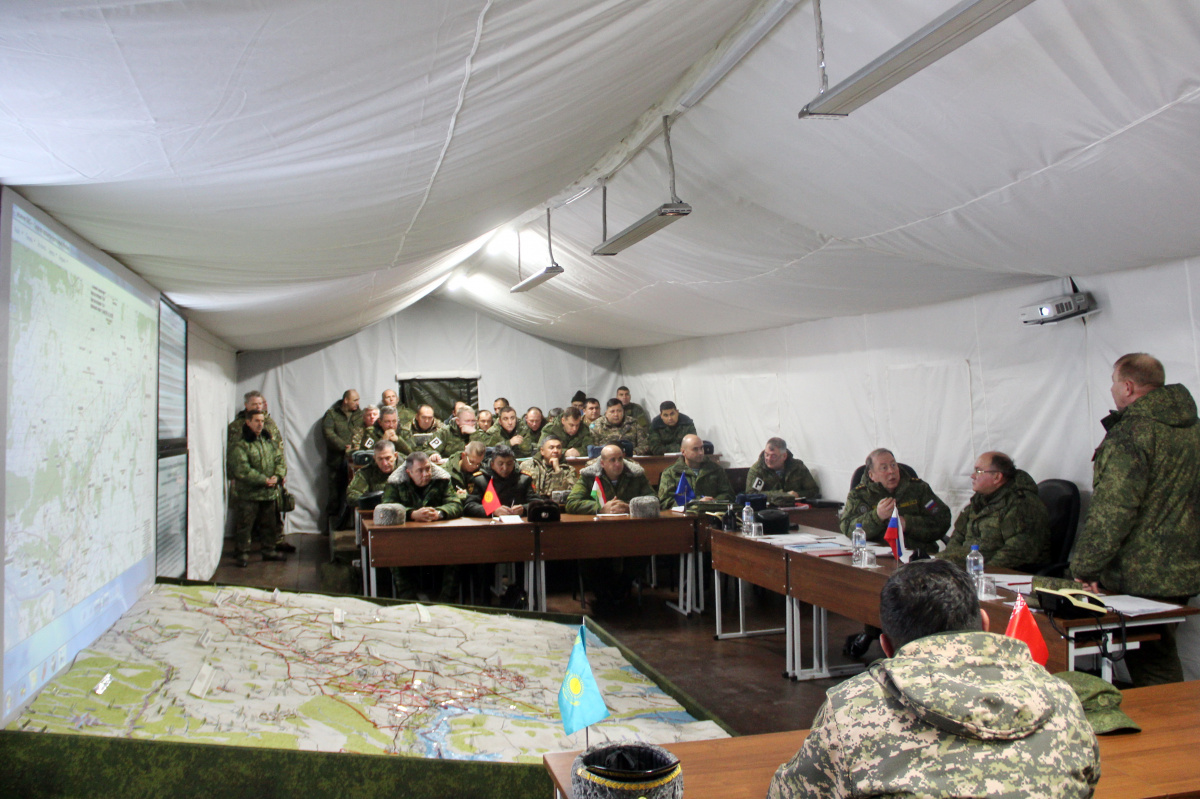 Today in the Republic of Tatarstan, at the Kazan Higher Tank Command School decorated with the Order of Zhukov training range, a hearing was held on the decision of the commander of the Collective Peacekeeping Forces (CSTO) to conduct a joint peacekeeping operation.

Lieutenant General Andrey Kolotovkin, commander of the CSTO CPF, delivered the report. He reported in detail on the plan of action, where the main efforts of the CSTO CPF units would be concentrated and how they would perform their tasks.

It is proposed that the main efforts of the Peacekeeping Forces be concentrated on creating disengagement zones (buffer zones, demilitarized zones) and on organizing control over the actions of the conflicting sides in order to create conditions for peace agreements.

According to the plan of the training, in accordance with the decision of the Collective Security Council, the CSTO CPF will conduct a peacekeeping operation in the area of responsibility with a depth of 32 kilometers and a width of 98 kilometers.

In the buffer zone, the participants of the training have to equip 48 observation posts and 19 checkpoints, as well as to secure 11 important state facilities.

Lieutenant General Andrei Kolotovkin paid special attention to the order of interaction of troops in solving tasks and defined the tasks of combat, material, technical and other types of support.

The decision announced by the commander of the CSTO CPF has been approved by the training leadership.

The CSTO CPF command post began work on planning the comprehensive support for the joint operation, and combat orders were sent to the CSTO CPF units.

The military contingents of the CSTO CPF are deployed to specified areas and conduct training for the practical stage of the upcoming live-fire training. In the course of practical actions, the CSTO Peacekeeping Forces began practicing actions at a roadblock, in a refugee camp, escorting humanitarian convoys, blockading a populated area, storming a building occupied by "militants," and releasing "hostages" and providing aid to the victims.

For the first time in such a training, "Linza" armored ambulances were used. Soldiers from the Republic of Belarus, the Republic of Kazakhstan, the Kyrgyz Republic and the Republic of Armenia familiarized themselves with the tactical and technical characteristics of the vehicle, during a practical episode to evacuate the wounded, assessed safety and called the vehicle a technique from computer games.

Military contingents of the Organization member States – the Republic of Armenia, the Republic of Belarus, the Republic of Kazakhstan, the Kyrgyz Republic, Russia and the Republic of Tajikistan, military police units, formations of internal affairs bodies (police), national guards, as well as authorized bodies in the sphere of prevention and liquidation of consequences of emergency situations, operative groups of the CSTO Joint Staff and the CSTO Secretariat participate in the training under the charge of Colonel General Alexander Lapin, Commander of the troops of the Central Military District.

About 1.8 thousand people representing the armed forces and law enforcement bodies of the CSTO member countries and about 300 weapons, including eight helicopters Mi-8 and Mi-24 and two multifunctional fighter-bombers Su-34 of the Central Military District of Russia are taking part in the training.

The "Indestructible Brotherhood 2021" training will continue until November 12, 2021.