The plan to equip the Collective Rapid Reaction Forces with modern weapons, military and special equipment and special means and the Plan for joint training of formations of the assets of collective security system in 2022 was approved

A meeting of the Council of Defense Ministers of the Collective Security Treaty Organization was held in Dushanbe on April 27, 2021. It was chaired by Tajik Defense Minister Colonel General Sherali Mirzo. The CMD has discussed the issues of military security, countering challenges and threats and measures to neutralize them. The CSTO Secretary General Stanislav ZAS took part in the meeting and informed about the situation in the Organization's area of responsibility and on the issues on the agenda.

Before the start of the CMD and the CSSC meetings, the Defense Ministers were received by the Chairman of the CSTO Collective Security Council, President of the Republic of Tajikistan Emomali Rahmon. 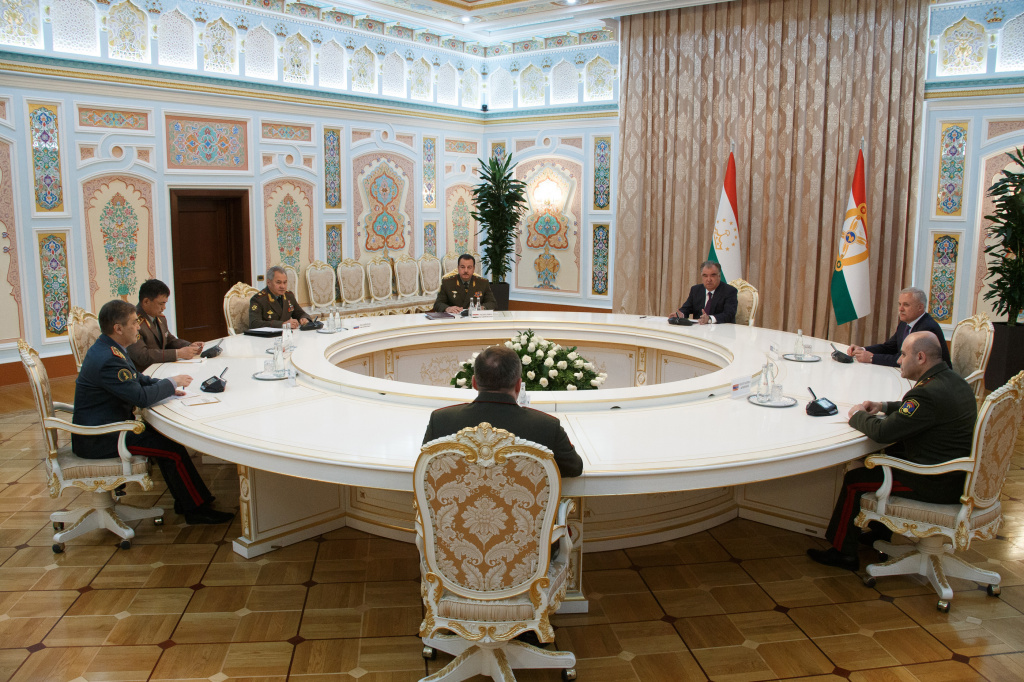 They discussed the cooperation of the CSTO member states in the military-political and military-technical sphere, as well as in the joint struggle against global challenges and threats, such as terrorism, extremism, drug trafficking, ensuring regional security, the situation in neighboring Afghanistan and strengthening of the state border between the Republic of Tajikistan and Afghanistan

It was stressed that the example of the COVID-19 pandemic made it clear that with the rapid spread of various infectious diseases in the world, the threat to security was increasing. Therefore, there was a need to take concrete measures, taking into account the positions of the parties, to develop a mechanism for ensuring the biological security of CSTO member states.

After meeting with Emomali Rahmon, the defense ministers laid wreaths on Dushanbe's Dusti Square at the monument to the first leader of the Tajik state, Ismail Samani.

The meeting of the Council of Defense Ministers was held with a small and large number of participants.

The Chairman of the CSTO CSC, Defense Minister of the Republic of Tajikistan Sherali Mirzo: "Challenges and threats of the modern world and the situation developing in different regions, high activity of terrorist groups in the immediate vicinity of our borders, negative processes maintaining tension in our neighboring countries, dictate the need to implement preventive measures that will minimize their impact on the security of our states.

At the end of the meeting of the Council of Defense Ministers, the CSTO Secretary General reported on its results: "The meeting of the Council of Defense Ministers was held in an atmosphere of alliance and mutual understanding. We have discussed challenges and threats to the military security of CSTO member states and measures to neutralize them. The defense ministers assessed the current military and political situation and the trends of its development in the Organization's area of responsibility - in the Eastern European, Caucasus and Central Asian regions of collective security.

If we characterize the situation as a whole, it is very complex and unstable. We note the increase of negative processes in the sphere of ensuring military security both at the global and regional levels. In fact, the existing international security architecture created after World War II is being dismantled.

We regret to note that the USA and its NATO allies are pursuing a destructive policy that significantly diminishes the role of the United Nations. Through their actions they consistently discredit the UN and try to take control of its structural elements, various proposals to reform the UN, especially the Security Council, are being put forward. Attempts are being made to question the existing veto mechanism of its permanent members to strengthen pro-Western positions.

The United States is manipulating international law to suit its national interests, which undermines the foundations of strategic stability in the world. The "reformatting" of the existing arms control system has led to a sharp escalation of military threats to the collective security of CSTO member states.

The situation in the CSTO area of responsibility is extremely unfavorable due to the increased crisis potential and terrorist activity in Central Asia and the Middle East.

NATO continues to build up its military capabilities in the immediate vicinity of the borders of CSTO member states. In the Eastern European region, for example, the level of intensity of operational and combat training activities of NATO military forces remains high. A series of “Defender of Europe” trainings is planned for this year, in the course of which plans for "military assistance" to Eastern European allies will be practiced. Within the framework of this training, large military contingents are planned to be redeployed to the western borders of the area of responsibility of CSTO member states.

A serious challenge to stability in the post-Soviet space is the unresolved conflict in southeastern Ukraine.

Open attempts from the outside to destabilize the internal political situation in the Republic of Belarus for the purpose of illegal change of power in the country after the presidential elections on August 9, 2020 have become a real threat not only for the Republic of Belarus, but also for the Organization as a whole.

All these negative trends undermine the foundations of strategic and regional stability and can lead to a sharp escalation of military threats to the collective security of CSTO member states in the Eastern European region.

The situation in the Central Asian region of collective security depends largely on the situation in neighboring Afghanistan, where there has been an increase in the activity of international terrorist organizations and the Taliban's growing attention to the northern regions of Afghanistan. Their retention of these territories allows the unimpeded functioning of one of the main channels of financing for extremists - drug smuggling. This is a source of great concern to CSTO member states.

At the same time, the situation in the Caucasus region of collective security is generally stabilizing. After the deployment of the Russian peacekeeping contingent to the Nagorno-Karabakh conflict zone, there has been a steady tendency to create conditions to further prevent a resumption of armed confrontation, and work on de-mining of the territory continues.

In the current circumstances, the CSTO is conducting a set of measures aimed at reducing and neutralizing potential threats on a planned basis.

The priority task is to develop and improve the readiness of CSTO troops (Collective Forces) to carry out tasks for their intended purpose. The defense ministers approved the 2022 plan for joint training of the command and control bodies and formations of the assets of the collective security system of the Collective Security Treaty Organization.

In 2021 we are planning to hold a joint operational and strategic training "Combat Brotherhood-2021", within the framework of which there will be a joint training with the CSTO Collective Rapid Deployment Forces "Interaction-2021", a special training with assets of reconnaissance "Search-2021", a special training with the assets of the Acquisition, Technology, and Logistics of the CSTO troops (Collective forces) "Echelon-2021" in the territory of the Republic of Tajikistan (October 2021). A joint training with the CSTO Peacekeeping Forces "Indestructible Brotherhood-2021" is planned on the territory of the Russian Federation (November 2021).

The CMD has approved the draft Agreement on jurisdiction and legal assistance in cases involving the temporary stay of formations of the Collective Security Forces on the territories of the CSTO member states. The purpose of the document is to create a mechanism for cooperation between the competent authorities of the CSTO member states: military police, military investigation, military prosecutor's office, military courts (tribunals) - in criminal and administrative cases against persons belonging to formations of the assets of collective security system.

The CSTO Council of Defense Ministers has approved the most important document, the Plan to equip the CSTO Collective Rapid Reaction Forces (CRRF) with modern weapons, military and special equipment and special facilities. The implementation of this plan is aimed at increasing the level of technical equipment of the components of the CSTO (Collective Forces).

The CSTO approved the Plan of consultations on foreign policy, defense and security issues for the second half of 2021 to the first half of 2022. With regard to military cooperation, the document provides for measures to develop the CSTO military component, improve the management of CSTO troops (Collective Forces) and develop military and economic cooperation within the Organization.

The defense ministers of the CSTO member states also approved the plan of events dedicated to the 30th anniversary of the signing of the Collective Security Treaty and the 20th anniversary of the Treaty Organization. The anniversary will be celebrated on May 15, 2022. This Plan provides for various organizational, foreign policy, military-technical, military-economic, cultural-educational, scientific and other activities.

Thank you for your attention.” 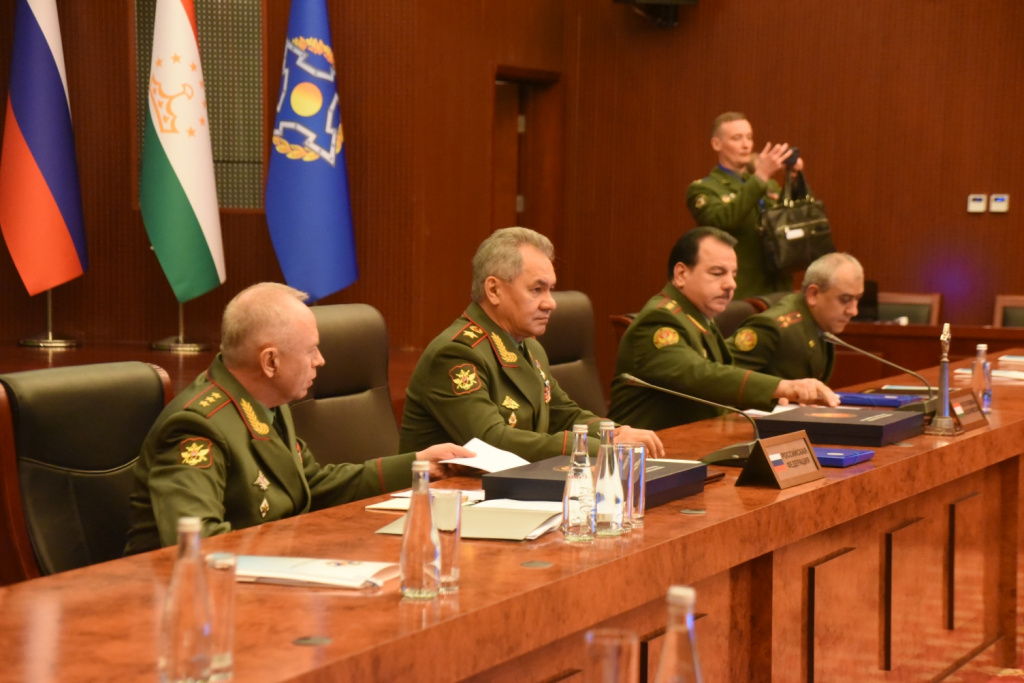 The next meeting of the Council of Defense Ministers of the CSTO member states is scheduled for the IV quarter of this year, on the eve of the session of the Collective Security Council of the organization. It will be held also in the Republic of Tajikistan.