The military-political situation in the CSTO zone of responsibility has been discussed at a joint meeting of the CFM, the CMD, and the CSSC in Dushanbe on September 15 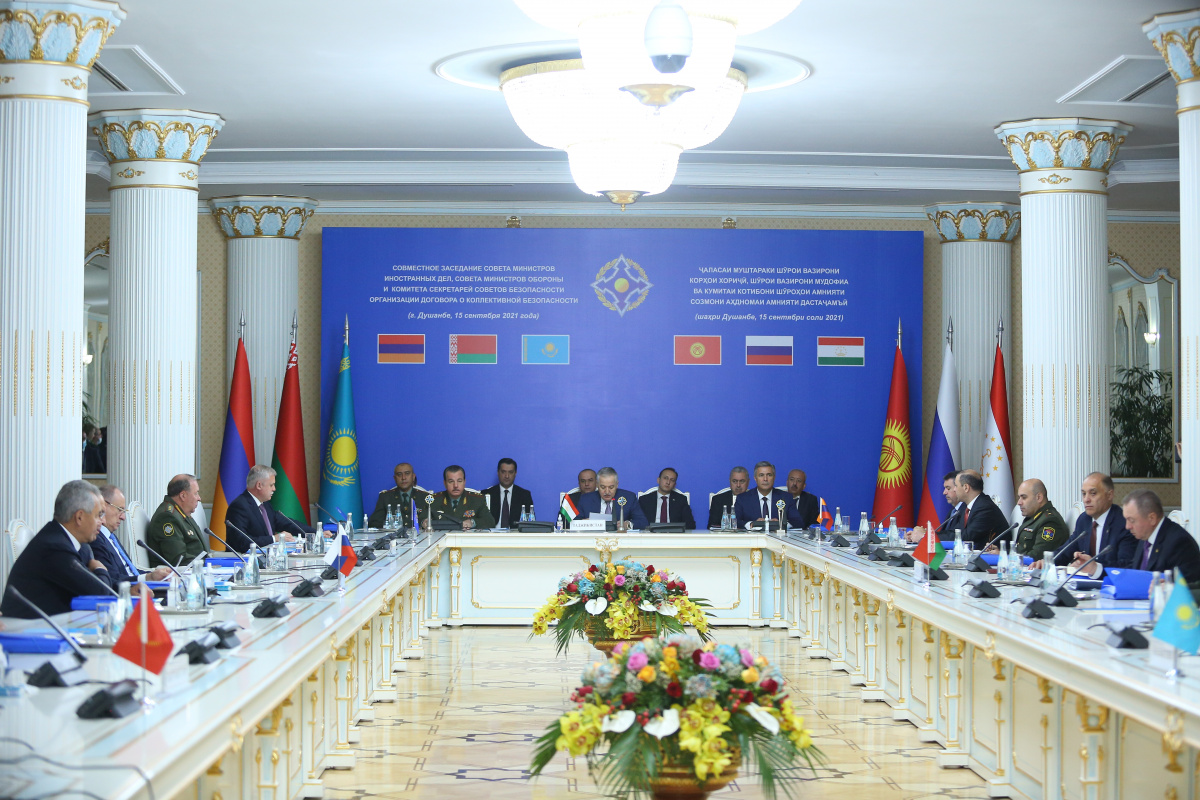 On September 15, this year, in Dushanbe, a joint meeting of the Council of Ministers of Foreign Affairs, the Council of Ministers of Defense and the Committee of Secretaries of Security Councils was held, chaired by the Minister of Foreign Affairs of the Republic of Tajikistan, Sirodjiddin Mukhriddin. The CSTO Secretary General Stanislav Zas took part in the meeting.

In the course of the meeting, the heads of foreign and defense ministries and security councils discussed and approved the agenda for tomorrow's (16.09.2021) meeting of the Collective Security Council and discussed in detail the military and political situation in CSTO collective security regions, its impact on the security of member States and the organization's activities during the intersessional period.

The CSTO Secretary General Stanislav Zas informed the media about the results of the meeting.

He noted that the situation along almost the entire perimeter of the borders of CSTO member States remained difficult. The situation in Afghanistan is especially disturbing. The joint meeting participants have discussed the situation on the Tajik-Afghan border. "Today the situation there is unfavorable, but Tajik border guards and law enforcement agencies fully control the borders of the country. Therefore, all CSTO member States are united in their opinion and once again confirmed their common position: in case the situation on the southern borders of the CSTO deteriorates, the Republic of Tajikistan will be provided with all necessary military and military-technical assistance. Tomorrow in the course of the CSTO Committee meeting there will be a detailed discussion of the proposals regarding the possible threats from Afghanistan, which were worked out following the special session of the CSTO Committee held on August 23 via videoconferencing," Stanislav Zas said.

The CSTO Secretary General reported that the coordination of CSTO member States on foreign policy issues was discussed substantially. "One of the most important tools of such coordination is the adoption of joint statements. In the course of the current joint meeting of the CFM, the CMD, and the CSSC five such statements were adopted," he said. These are:

- The Joint Statement of the CSTO member States "On the Situation in Afghanistan". It calls on all ethnic and religious groups in Afghanistan to refrain from armed confrontation, take the necessary measures to normalize the situation, preserve the lives of civilians, restore peace and economic development, and eradicate terrorism and drug-related crime in all their forms and manifestations in Afghanistan

The CSTO member States also call for the suppression of any security threats emanating from the territory of Afghanistan and reaffirm their determination to make use of the resources available to the CSTO to ensure its member States security.

At the same time, the document calls on the international community to increase humanitarian aid to the Afghan population, confirms the intention of the CSTO member States to assist Afghanistan in becoming a peaceful, stable, prosperous country free of terrorism, war and drugs, and willingness to participate in international efforts to stabilize and develop Afghanistan under the central coordinating role of the UN.

They fully support the principle that the states refrain from the threat or use of force in violation of the UN Charter. They declare that political means should be given priority in achieving the goals of strengthening peace and international and regional security.

They express grave concern at the continued imposition of unilateral coercive measures not based on international law, including economic measures (sanctions), which inter alia impede the efforts of the most vulnerable countries to combat the coronavirus pandemic and address its social and economic consequences, and reiterate their support for the UN Secretary General's call for the suspension of such restrictions.

- The Statement of the ministers of foreign affairs of the CSTO member States on the occasion of the 30th anniversary of the CIS and the 20th anniversary of the Shanghai Cooperation Organization, in which the heads of foreign affairs departments highly evaluate the activity of the Commonwealth of Independent States and the Shanghai Cooperation Organization and note the relevance of the Agreement on the establishment of the Commonwealth of Independent States signed 30 years ago and the Almaty Declaration, which are based on principles of equitable political dialogue, mutual trust, consideration of each other's interests and recognition of the right of the member States to self-determination.

We also state that 20 years after its founding, the Shanghai Cooperation Organization is a significant participant in the modern system of international relations, which is increasing its contribution to peace and security and the resolution of international and regional conflicts, based on the goals and principles enshrined in the UN Charter.

- The Statement by the ministers for foreign affairs of the Collective Security Treaty Organization member States on collective efforts to resolve crisis situations in the Middle East and North Africa.
- The document expresses concern about the ongoing conflicts and crises in the Middle East and North Africa, which remain a source of challenges and threats to regional and international stability and security, including for the CSTO member States.

A large block of documents was also signed in the field of training of personnel for the armed forces of the CSTO member States.

The CMD decisions were signed on granting the status of the basic educational and methodological organization for medical support of the armed forces of the CSTO member States and the CSTO troops (Collective Forces), as well as training military personnel in medical and pharmaceutical specialties of the Kirov Military Medical Academy of the Ministry of Defense of the Russian Federation in St. Petersburg.

Taking into account that the presidency in the CSTO in 2021-2022 passes to the Republic of Armenia, the Armenian side informed about the priorities of the country for the period of presidency in our Organization.

The next regular meetings of the Council of Foreign Ministers, the Council of Defense Ministers and the Committee of the Secretaries of Security Councils of the CSTO will be held in the first half of 2022 in the Republic of Armenia. A separate protocol Decision has been adopted on this occasion.