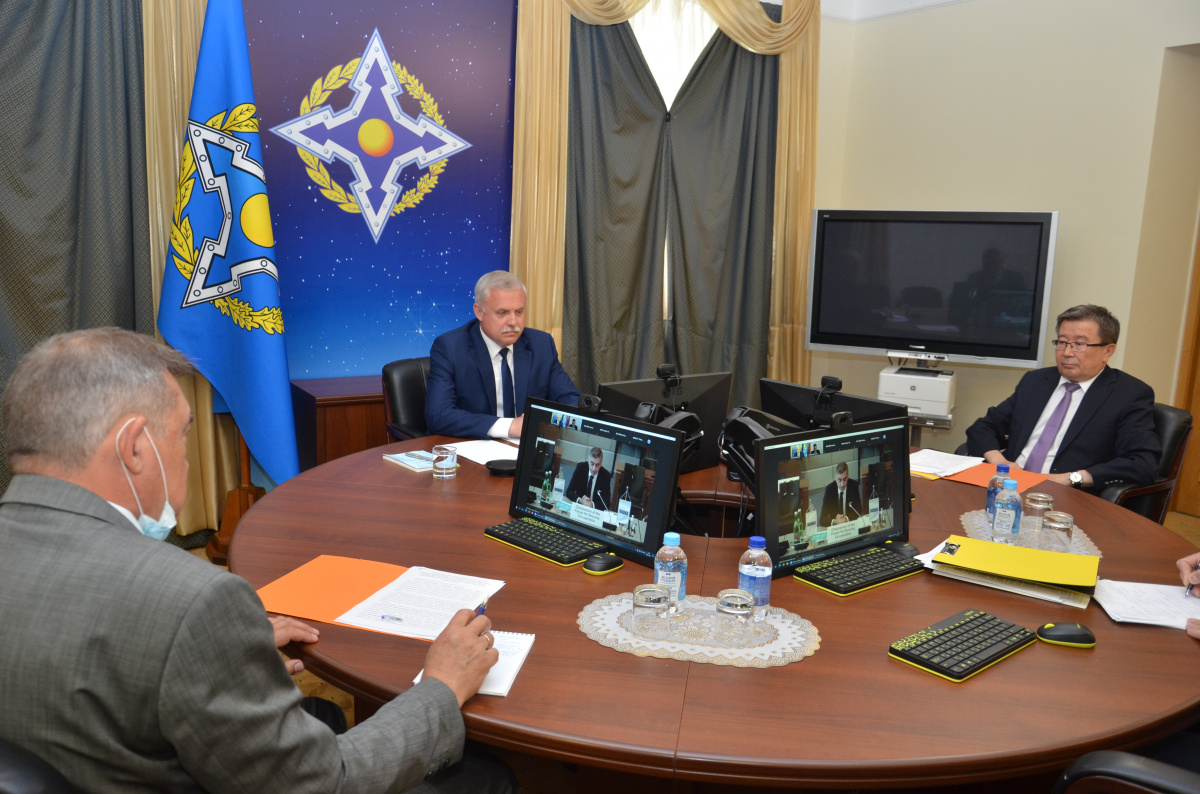 On June 9 this year, the CSTO Secretary General Stanislav Zas via videoconferencing participated in the annual OSCE Forum for Security Cooperation, the motto of which was "Restoring Trust through Implementation of Military and Political Commitments", and spoke at the session "Regional Security Structures: CSTO".

Stanislav Zas noted in his speech, that the participation in the meeting of one of the oldest and main decision making bodies of the OSCE reflected the common interest of the OSCE member States and the CSTO member States in counteracting contemporary challenges and threats to security, ensuring the creation of a common and indivisible security space in Europe and Eurasia.

"As recently as a year ago, the serious threat to security posed by the pandemic and the need to combat it seemed to unite us all, consolidate the global community and smooth over the existing contradictions. However, this has not happened," Stanislav Zas said.

He emphasized that in the Declaration adopted at the Session of the CSTO CSC on December 2, 2020, in the special statement of the Ministers of Foreign Affairs of December 1, 2020, the member States of our Organization confirmed their solidarity and support to the call of the UN Secretary General António Guterres for an immediate and global ceasefire in all corners of the world due to the spread of a new type of coronavirus infection.

"We have to state that to the existing list of challenges and threats the tasks of ensuring biosecurity have been added. Despite certain successes in combating the coronavirus pandemic, its economic, social and demographic consequences have a negative impact on the dynamic development of a significant number of countries and complicate the prospects for ensuring lasting stability. We remain convinced that the new challenges of our time and the fight against them will ultimately become a unifying motive in the OSCE and the CSTO region," the CSTO Secretary General noted in his statement.

According to him, in the course of the recent meetings of the CSTO statutory bodies, held under the chairmanship of the Republic of Tajikistan in Dushanbe, in was noted, that significant positive shifts in global and regional security haven’t been achieved yet. "The prolongation of the START-3 Treaty at the beginning of the year remained a very significant, but still an isolated positive episode in the overall tense picture," Stanislav Zas said.

The CSTO Secretary General told the OSCE Forum that the security mechanisms established after the World War II, which gave Europe seventy-five years of lasting peace, continued to function with disruption.  "The dismantling of the Treaty on the Elimination of Intermediate-Range and Shorter-Range Missiles and the launch of the Open Skies Treaty denunciation procedure are further eroding the established arms control system,” Stanislav Zas stressed.

"In addition to the continuing general turbulent situation, we note an increase in a number of politico-military threats in the Eastern European region of the CSTO collective responsibility area. The deployment of elements of the strategic missile defense system and the additional deployment of troop formations in the immediate vicinity of the borders of the Organization's member States continues,” the CSTO Secretary General said.

In his view, Afghanistan remains the main focus of instability negatively affecting the situation in the Central Asian region.

“According to our assessment, the threats of the activation of international terrorist and religious extremist organizations in the territory of Afghanistan and, consequently, the likelihood of the spread of terrorism and criminal drug trafficking have not diminished. The possibility of an early settlement of the situation in the territory of that country and, as a consequence, in the Afghan border region remains low. After the withdrawal of the military contingent participating in the NATO mission, the question remains whether official Kabul and “The Taliban” will be able to prevent the strengthening of ISIS and other extremist groups there and reach appropriate agreements. Infiltration of ISIS extremist fighters from Syria and Iraq is exacerbating the situation there. One of the conclusions of the recent Working Group meeting was a consensus on the importance of strengthening the southern borders of the CSTO.” Stanislav Zas said.

According to him, threats to regional stability from the territory of Afghanistan can have negative impact for European security as well. “The situation in the Islamic Republic of Afghanistan plays a special role in ensuring long-term stability and security throughout the OSCE area. Afghanistan needs constant foreign support, both from the countries of the region and from international and regional organizations. I would like to note that at the spring meetings of the CSTO constituent bodies we noted the importance of continuing the implementation of the List of additional measures aimed at reducing tensions in the Tajik-Afghan border area. A draft the CSTO Special Interstate Policy for strengthening sections of the Tajik-Afghan Border is being developed,” the CSTO Secretary General informed the OSCE Forum.

He emphasized, that despite all the difficult circumstances, the Organization managed to maintain control in the CSTO area of responsibility.

”Coordination of actions of the CSTO member States on topical foreign policy issues is increasing in these difficult times. An important element of this coordinated policy is the adoption on a regular basis of joint statements of the Council of Foreign Ministers. For example, at the last meeting of the CSTO Ministerial Council four such statements were adopted,” – Stanislav Zas said.

- The Statement "On the 75th Anniversary of the Judgement of the International Military Tribunal at Nuremberg”;

The Statement "On the CSTO Cooperation with States and International Organizations" reflected the common interest of CSTO member States in developing friendly and mutually beneficial relations with third countries and international organizations in maintaining peace and stability in the Eurasian region.

The forth "Statement of the Ministers for Foreign Affairs of the CSTO member States in connection with the extension of the Treaty between the Russian Federation and the United States on the Further Reduction and Limitation of Strategic Offensive Arms of April 8, 2010" expressed the unified conviction of our countries about the importance of ensuring predictability in the relationship between the two largest nuclear powers, which is undoubtedly the basis for strengthening and restoring trust in international relations.

Summing up his speech, Stanislav Zas noted that the CSTO would increase its participation in global efforts to ensure peace and security, consistently advocating the settlement of international and regional conflicts, primarily armed conflicts, by exclusively peaceful political and diplomatic means within the framework of internationally recognized negotiation formats, based on generally recognized principles and norms of international law without a selective approach.