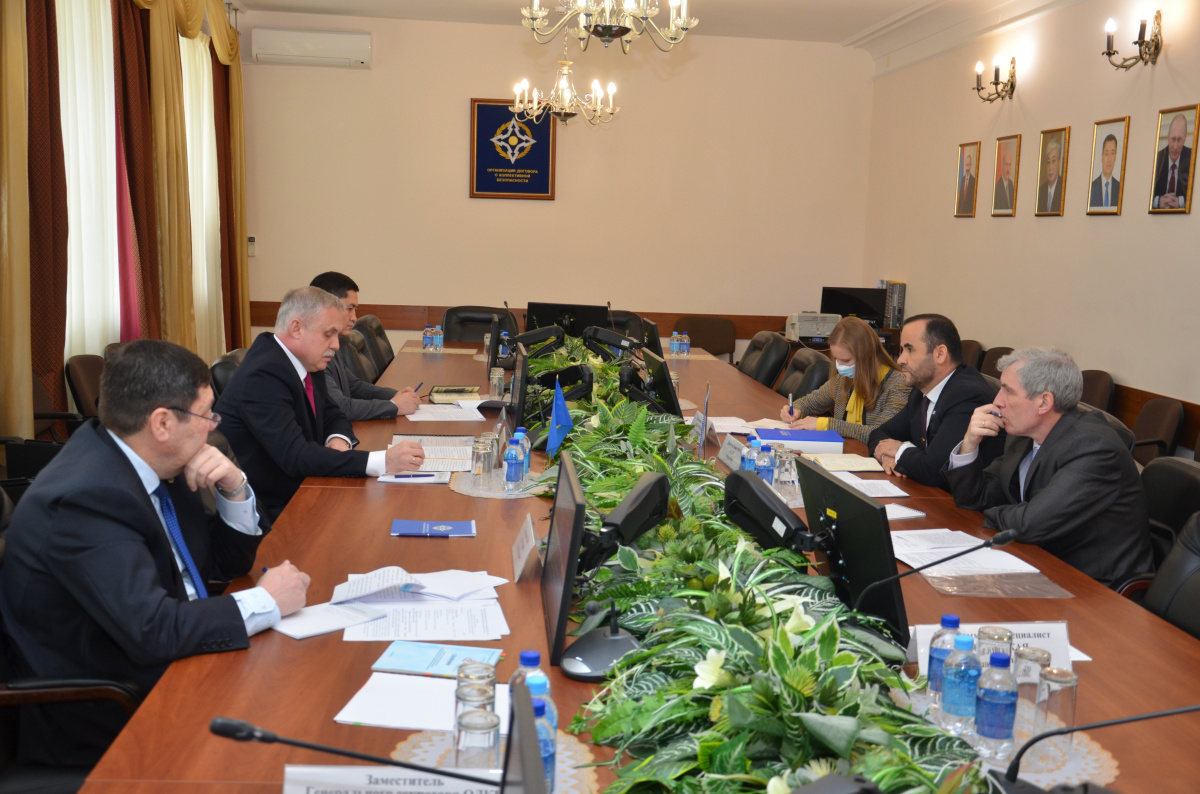 On March 17, this year, at the Secretariat of the Collective Security Treaty Organization, the CSTO Secretary General Stanislav Zas had a meeting with the Moscow Chief of Mission of the International Organization for Migration Abdusattor Esoev. 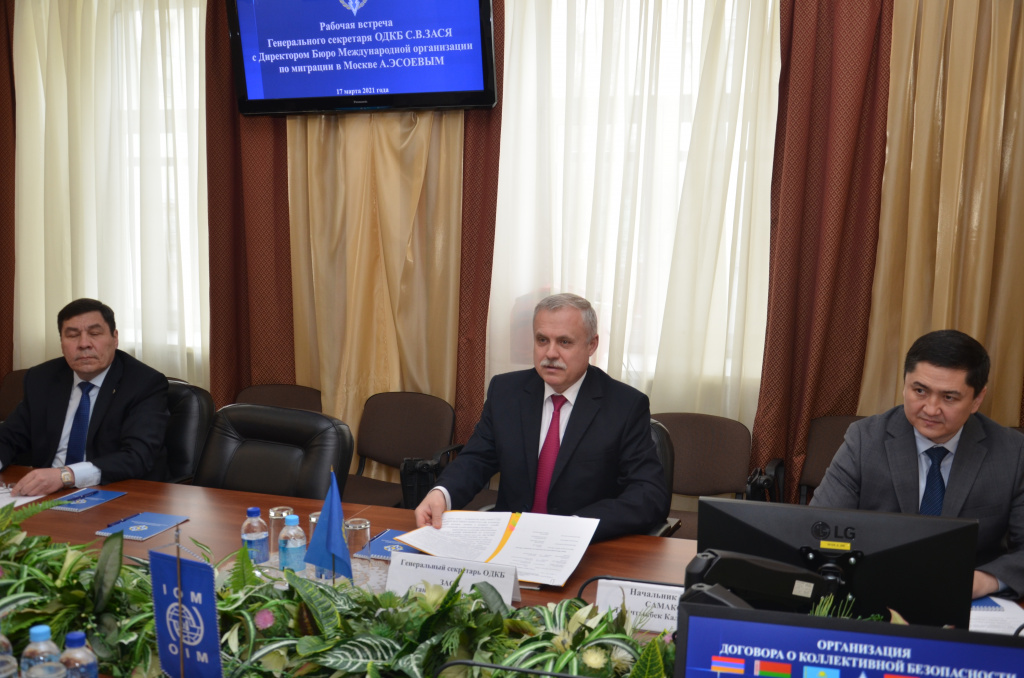 Stanislav Zas has informed the IOM representative about the migration situation in the CSTO area of responsibility and the measures being taken within the framework of the Organization to combat illegal migration. He drew attention to the fact that today it was necessary to step up efforts of the entire world community in the interests of global migration security.

The CSTO Secretary General noted the importance of developing cooperation on countering illegal migration with interested international organizations, and in particular with the IOM. He said that the process of ratification in the CSTO member states of the provisions on the status of Observer and Partner, which normatively determined the procedure for obtaining these statuses with the interest of any state or international organization, had already been completed.

The CSTO Secretary General has informed about the results of the international operation "Illegal", carried out annually since 2008. “Through the joint efforts of law enforcement agencies in the course of 25 active stages of this operation, over 1.5 million violations of migration legislation were revealed, more than 13 thousand criminal cases were initiated for organizing illegal migration and 562 criminal cases for human trafficking. Fines were imposed in the amount of about US $ 90 million,” Stanislav Zas said.

He said that the analysis of information received by the CSTO Secretariat from the law enforcement agencies of the CSTO member states showed that at present the migration situation in general in the Organization's states was stable and controlled. “It should be noted that in the CSTO area of ​​responsibility there are migration flows from countries with an unstable domestic situation and difficult economic conditions from the countries of Southeast Asia, the Asia-Pacific region, the Middle East, which mainly pass through the Central Asian states to the Russian Federation and the Republic of Belarus. Due to their geographical location, they are transit countries for illegal migrants, whose ultimate goal for their stay these people consider the states of the European Union,” - the CSTO Secretary General said.

Stanislav Zas stressed that the development of a collective system for countering illegal migration in the CSTO was regularly considered in the course of the Collective Security Council sessions and at meetings of the Organization's statutory bodies.

In turn, Abdusattor Esoev noted that the IOM attached great importance to expanding cooperation with the CSTO, including taking into account the fact that all states of the Organization were members of the International Organization for Migration. In the fall of 2020, the Russian Federation joined the IOM, becoming the 174th member state. 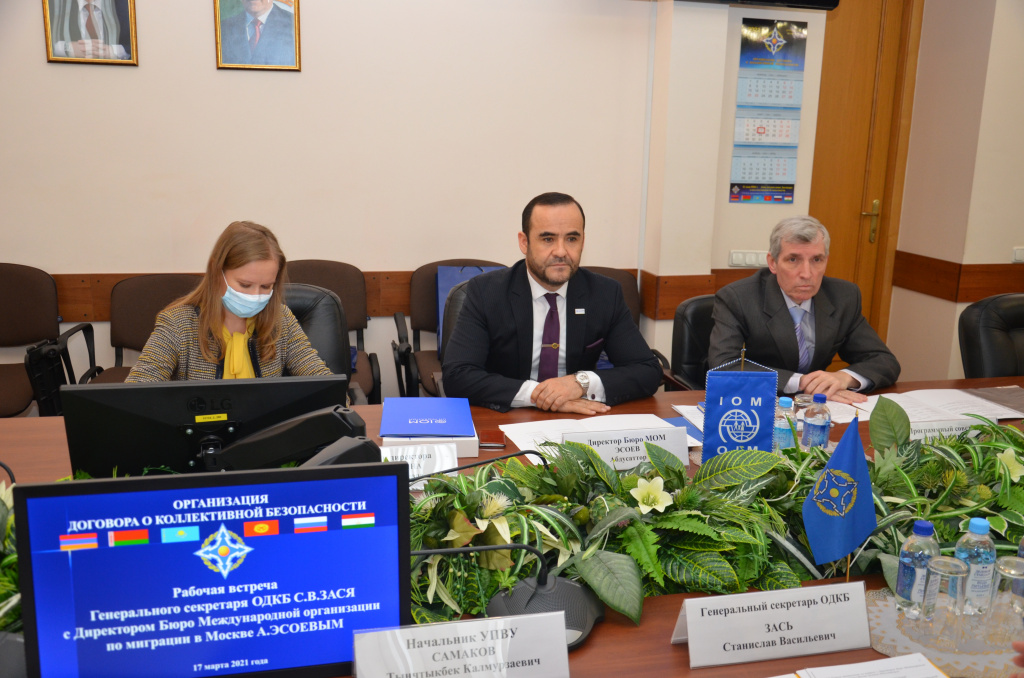 He noted with satisfaction that the IOM Moscow Office had the honor to present the Comprehensive Comparative Legal Analysis of the Legislation of the CSTO Member States in the Field of Counteracting Illegal Migration and Human Trafficking, carried out jointly with the CSTO Secretariat.

The main result of the study is that the national legislation of all CSTO member states is fundamentally fully consistent with generally recognized international standards and approaches in the field of combating illegal migration and human trafficking.

In conclusion, both sides expressed satisfaction with the development of cooperation between the CSTO and the IOM and reaffirmed their intention to improve the efficiency of interaction in areas of common interest.

On July 26, 2006, Memorandum of Cooperation was signed between the CSTO Secretariat and the IOM Administration.