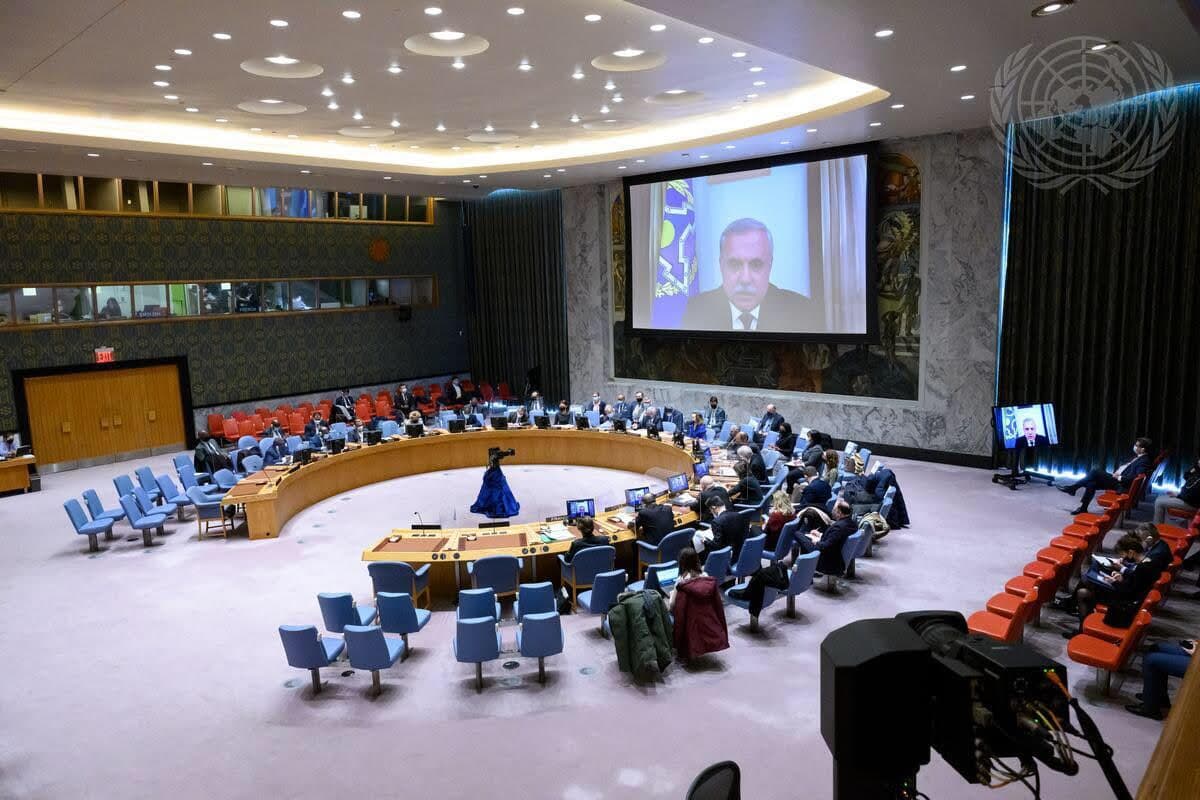 The results and prospects of cooperation between the UN and the CSTO were discussed in a constructive manner.

Allow me to thank the Russian presidency of the UN Security Council for inviting us to discuss the participation of our Organization in the maintenance of international peace and security. I am convinced that today's meeting will contribute to the elaboration of additional mechanisms for cooperation between the UN and the CSTO in the interests of peace.

We fully support the points made by UN Secretary General António Guterres in the "New Agenda for Peace" on the importance of reducing strategic security risks through preventive regional activities and agree with his assessment that regional security organizations play a central role in maintaining peace and preventing and overcoming instability. For its part, the CSTO is aimed at the effective implementation of these tasks in its area of responsibility and has the necessary capacity.

We regard the UN as our main international partner and are interested in strengthening the role of the world organization. This approach is enshrined in the Statement of the Ministers for Foreign Affairs of the CSTO member States on reaffirming adherence to the principles of the United Nations Charter and strengthening cooperation to ensure strict compliance with It (15 September 2021).

At the same time, I note that the Resolution “On cooperation between the United Nations and the CSTO” adopted at the 75th session of the UN General Assembly (A/RES/75/276) praises our Organization as a partner. It notes that "since the signing of the Collective Security Treaty, the CSTO has been transformed into a multifunctional structure with the capacity to respond adequately to a wide range of challenges and threats in its area of responsibility”.

We are pleased with the development of our interaction with the UN Counter-Terrorism Office (UN CTO) and the Executive Director of the UN Security Council Counter-Terrorism Committee (CTC), as well as the UN Office on Drugs and Crime (UNODC) within the framework of existing memorandums. We are in favor of further expanding this cooperation.

For the past three years, special CSTO operation "Mercenary" has been conducted by the special services. Its main purpose is to shut down channels for the recruitment, entry and exit of citizens of our states to participate in terrorist activities and to neutralize the resource base of terrorist organizations. It has shown its effectiveness and relevance.

In the interests of stepping up international cooperation to combat the spread of terrorist ideology and propaganda in accordance with the existing UN SC resolutions, in particular resolutions 1624 and 2354, we are prepared to combine our efforts in the area of information security to develop, under United Nations auspices, universal rules, norms and principles for responsible behavior in the information space. The principles of our joint actions in preventing and combating the use of the Internet for terrorist purposes, including the central and coordinating role of the UN, are consolidated in the corresponding Joint Statement of the Ministers of Foreign Affairs of the CSTO member States, adopted on 2 December 2021.

We are ready to share our experience in conducting special preventive operations. By the way, just today we had a trilateral meeting at the CSTO Secretariat on strengthening cooperation and exchange of experience in combating international terrorism and extremism, which was attended by the CSTO Secretary General, the Director of Executive Committee of SCO Regional Anti-Terrorist Structure and the Head of CIS ATC. We take this opportunity to call on international and regional organizations and individual states not only to observe the course of our trainings and operations but also to participate in them. The mechanisms of interaction and partnership developed in our Organization allow us to do this.

With a view to exchanging experience and information on the above-mentioned issues, we support the proposal to hold meetings in the form of regular consultations of experts from the UN, the OSCE and the CSTO. We are ready to start agreeing on their agenda.

We consider interaction on peacekeeping issues to be the most important practical area of our long-term cooperation with the UN.

I am grateful to Jean-Pierre Lacroix, the UN Deputy Secretary General for Peacekeeping Operations. As a result of our meeting on June 22, 2021, things have progressed noticeably. A joint CSTO-UN working group on peacekeeping has been established. Regular expert-level consultations with experts of the Department of Peacekeeping Operations have been organized. In early December 2021, with the assistance of the Department, a working visit of the CSTO specialists to the UN peacekeeping mission in Lebanon ("UNIFIL") took place. Useful meetings were held with the leadership of the peacekeeping mission and peacekeepers "in the field". We have received useful assistance in undergoing certification procedures for our peacekeepers' training programs and techniques in the CSTO's basic training and methodological organization in accordance with the UN standards. We are exploring the possibility of participation by CSTO peacekeepers in existing United Nations peacekeeping operations through a "coordinating state". We are ready to involve "combined peacekeeping units", including military police, medical and engineer-sapper units manned by member States of the Organization.

The heads of states have established the institution of the Special Representative of the CSTO Secretary General for Peacekeeping with the rank of CSTO Deputy Secretary General. We are interested in his active cooperation with the UN specialized structures.

The CSTO has significant resources for effective participation in UN peacekeeping operations. To date, the CSTO Peacekeeping Forces have about 3,800 personnel. These are highly trained and equipped with modern weapons and equipment units, most of whose servicemen have combat experience and experience of participation in peacekeeping operations. They generally meet the UN requirements and standards, both in terms of structure and level of readiness to earmarked tasks.

The high professional level of the CSTO Collective Peacekeeping Forces was confirmed during the recent peacekeeping operation in the Republic of Kazakhstan. The operation was carried out at the request of the President of the Republic of Kazakhstan, K.-J. K. Tokayev, in accordance with Articles 2 and 4 of the Collective Security Treaty and the Agreement on CSTO Peacekeeping Activities. This indicates its legitimacy and compliance with the CSTO legal framework, ratified by the parliaments of the states of our organization. Moreover, its conduct was fully in line with political and international legal principles of the UN. The UN Secretary General, in accordance with the requirements of Article 54 of the UN Charter and Article 4 of our Collective Security Treaty, was immediately notified by our letter about the operation.

In fact, this was the first time that the CSTO's peacekeeping potential had to be put to practical use. At the same time, it should be noted that the task of eliminating threats to security and stability was accomplished in the shortest possible time. I emphasize that the effect of the operation was achieved largely due to the moral and political support of the Republic of Kazakhstan by its CSTO allies and the well-coordinated actions of peacekeepers, who arrived in the shortest possible time and departed after the completion of the operation. It is gratifying that not a single shot was fired by our peacekeepers during the entire operation. The peacekeeping units were used exclusively to protect critical infrastructure and prevent a humanitarian disaster.

I would like to assure the Security Council members and the UN Secretary General and all participants of today's meeting that the CSTO today has real capabilities, in particular peacekeeping capabilities, which if necessary can be used to maintain international peace and security. In doing so, we are certainly interested in the broadest possible cooperation with the specialized UN structures.

I have highlighted only some of the CSTO activities in which, in our view, we can and should increase our cooperation with the UN and other organizations and countries. Of course, the list of tasks to be resolved by the organization is much broader. Growing international tensions and negative trends in the global and regional security aggravate existing challenges and emergence of new ones for our countries. In our activity we give priority attention to the southern borders where Afghanistan remains a long-lasting permanent hotbed of danger. In the context of the socio-economic and humanitarian catastrophe unfolding there, the threats of terrorism and drug trafficking from its territory are increasing.

There has been an unprecedented increase in tension in our western direction - the eastern European region. The ongoing build-up  of troop formations, military infrastructure and military activities in recent years near the western borders of CSTO member States, combined with the unresolved problems in eastern Ukraine, have brought the situation to the brink of a slide towards full-scale military action. We very much hope that the parties to the negotiation process will be able to find an acceptable solution to the problems that have developed and will not allow hostilities to break out.

It is obvious that the intensity of regional conflicts is not declining and poses a permanent threat to international peace. We are ready to use our considerable potential for preventive actions and overcoming the danger by joining efforts of the CSTO and specialized UN structures in the security sphere, first of all in peacekeeping and in combating new challenges and threats.

We confirm our readiness to develop friendly and mutually beneficial relations with third countries and international organizations in maintaining peace and stability, to build such cooperation on the basis of universally recognized norms and principles of international law, the rejection of confrontation, and the resolution of world problems by exclusively political and diplomatic means in accordance with the provisions and goals of the UN Charter.

Thank you for your attention.