In the Issyk-Kul region of Kyrgyzstan, an active phase of the CSTO large-scale anti-drug trainings - “Thunder-2019” ("Grom-2019") took place, in which the CSTO Acting Secretary General Valery Semerikov took part 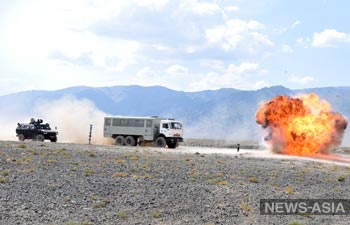 
In the Issyk-Kul region of Kyrgyzstan, large-scale tactical and special anti-drug trainings of the CSTO - "Thunder-2019" ("Grom-2019") were held. In the framework of the joint trainings, a training-methodical meeting of representatives of ministries and departments was carried out, the units of which were involved in the trainings. In accordance with the Plan of joint activities for operational and combat training of the CSTO Collective Rapid Reaction Force and the Plan for the implementation of the priorities of the Kyrgyz Republic for the period of its chairmanship of the Collective Security Treaty Organization, a set of measures has been taken to improve the preparation of Special Forces Formations that are part of the CSTO Collective Rapid Reaction Force. The anti-drug tactical and special trainings “Thunder-2019” ("Grom-2019") were held from August 6 to 8, 2019 in Balykchy, Issyk-Kul Oblast, at the Edelweiss training ground of the General Staff of the Armed Forces of the Kyrgyz Republic.

During the first stage of the training of the special forces of the anti-drug departments, the internal affairs bodies, the national guard, the special services of the member states of the Organization, which are part of the CSTO Collective Rapid Reaction Force, as well as the armed forces, they solved educational and applied tasks in the highlands. Special forces from the CSTO member states, in close contact with operational personnel and units of the Armed Forces of the Kyrgyz Republic, as well as the United Russian Air Base, located in the city of Kant, in conditions as close to combat as possible, improved their skills and interaction issues. During the joint special operation, questions of planning and decision-making, organization of management and interaction were worked out.

As part of the second stage of the trainings, practical actions were taken of the combined operational and combat groups of the special forces in solving tasks for their intended purpose, as well as tactical shooting competitions from military weapons were held. They involved armored vehicles, special vehicles, unmanned aerial vehicles, as well as helicopters and aircraft from the russian air base "Kant". The trainings were attended by observers from the Islamic Republic of Iran, UNODC, CARICC, as well as the EU-ACT project on the fight against drugs and organized crime.

The general management of the exercises was carried out by the Deputy Minister of Internal Affairs of the Kyrgyz Republic Almaz Orozaliev. The trainings at the venue were monitored by the CSTO Acting Secretary General Valery Semerikov. He noted the importance of conducting such trainings in the general system of training units and subdivisions of the CSTO collective forces. Semerikov praised the professional training and education of employees of special units of all CSTO member states. At the end of the trainings, a detailed analysis was carried out and its results were summed up. The most distinguished employees are encouraged.

It should be noted that in the framework of the trainings, an educational and methodological meeting was organized with representatives of government bodies from among the ministries and departments of the CSTO member states, as well as unit commanders of the formations of special forces of the Collective Rapid Reaction Force, as well as the armed forces, they solved educational and applied tasks in the highlands. Special forces from the CSTO member states, in close contact with operational personnel and unit. The purpose of this gathering was to increase the professional skill of its participants in the preparation of units, combat coordination, organization of interaction in the course of fulfilling their intended tasks.

Classes were both theoretical and practical. Particular attention was paid to organizing the management of special forces during the preparation and conduct of joint and independent special operations to combat terrorism, extremism, transnational organized crime and drug trafficking. The students were familiarized with the work of the operational staff at the field mobile control point.