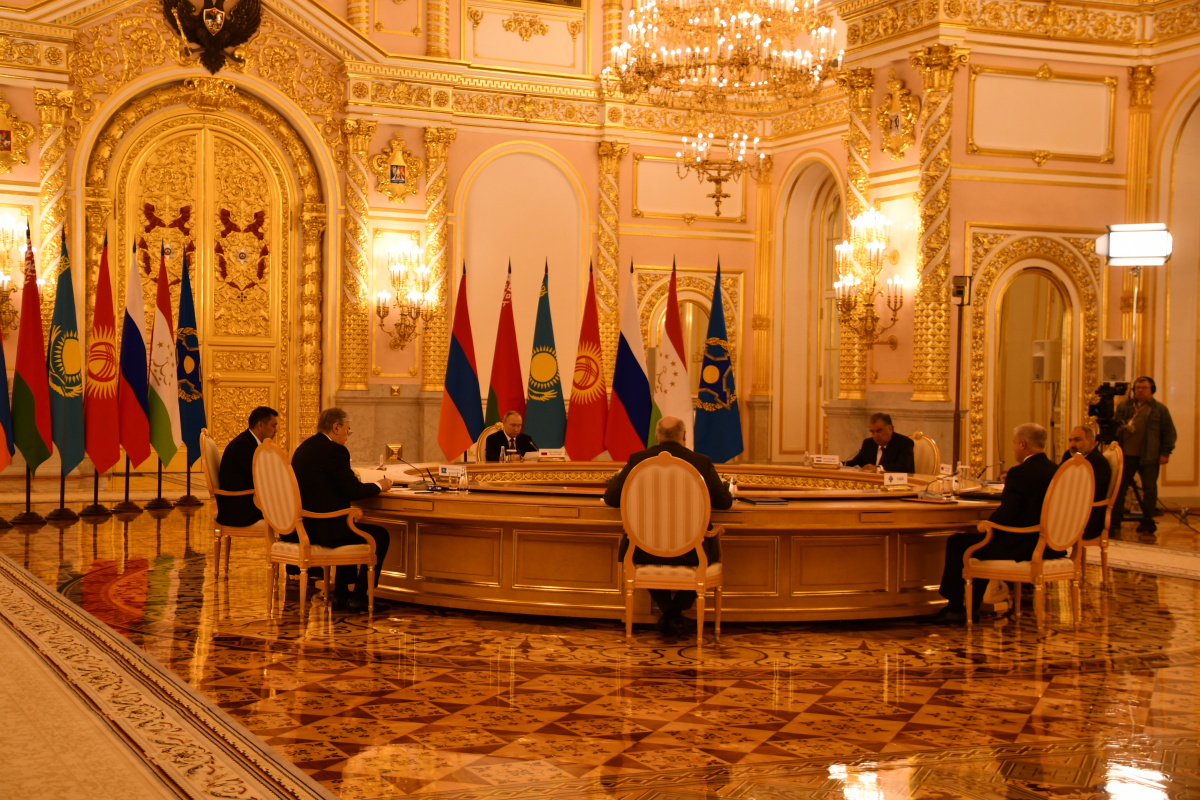 The event was also attended by the CSTO Secretary General Stanislav Zas. He has informed the media about the results of the meeting of the leaders:

Dear members of the media,

I would like to express my gratitude to the Russian side for the excellent organization of the event.

The meeting has discussed the state of international and regional security. They assessed the role and place of our Organization in international relations and defined the prospects for its development.

In the course of the discussion, the heads of states noted that the number of challenges and threats to security, not only in the Organization's area of responsibility, but also in the world as a whole, was steadily growing.

A serious challenge for the CSTO member States has been the sharp increase in the aggressiveness of world powers and military-political blocs against the Russian Federation and its allies.

The military presence of NATO in the Eastern European region is expanding, military infrastructure is growing, and the intensity of operational and combat training activities is increasing. Military expenditures are increasing significantly. New European countries are being drawn into the alliance.

Modern armaments are being supplied to Ukraine in increasing volumes.

Despite positive results in the negotiation process between Armenia and Azerbaijan, tensions remain in the Caucasus region. Armed incidents on the Armenian-Azerbaijani border continue unabated. Under these conditions, an important role in stabilizing the situation is played by the Russian peacekeeping contingent, which ensures the fulfillment of the conditions of the Trilateral Agreements of November 9, 2020.

Afghanistan remains a serious destabilizing factor in the Central Asian region. Threats emanating from Afghan territory, including terrorism and drug trafficking, not only persist, but may become more acute as the socio-economic situation in that country deteriorates.

Thus, dear journalists, unfortunately, the situation along the entire perimeter of the borders of CSTO member States remains tense

Of course, these negative processes are taken into account in our activities. We continue to develop existing collective security systems and peacekeeping capabilities, as well as improving crisis response mechanisms.

It notes that the choice we made in favor of uniting peacekeeping efforts in the Eurasian space has stood the test of time. The Treaty concluded in 1992 fulfills its main task of ensuring collective security and stability, territorial integrity and sovereignty of its participating States.

The Statement expresses readiness to ensure the security of the borders of the CSTO area of responsibility and expresses concern about the selective application of generally recognized norms and principles of international law, unwillingness to take into account the legitimate interests of sovereign states, interference in their internal affairs, the use of unilateral sanctions and restrictions in violation of the prerogatives of the UN SC, manifestations of double standards.

The document notes that the efforts made to strengthen the Organization and its adaptation to the current geopolitical situation have made it possible to form an effective system of collective security and countering challenges and threats. The CSTO has raised cooperation among the member States to a qualitatively new level of allied relations, has accumulated significant potential to counter a wide range of contemporary challenges and threats, and has become an important factor of peace and stability in the Eurasian space.

I would also like to announce that today the Decision was signed by the Collective Security Council on awarding the most distinguished participants of the CSTO peacekeeping operation on the territory of the Republic of Kazakhstan with the CSTO awards.

In the course of today's meeting of leaders of the CSTO member States a number of instructions were given for our further activities.

Thank you for your attention * *

In 2022, the Republic of Armenia is chairing the Collective Security Treaty Organization.