On December 2, 2020, for the first time, a session of the CSTO Collective Security Council was held by videoconference 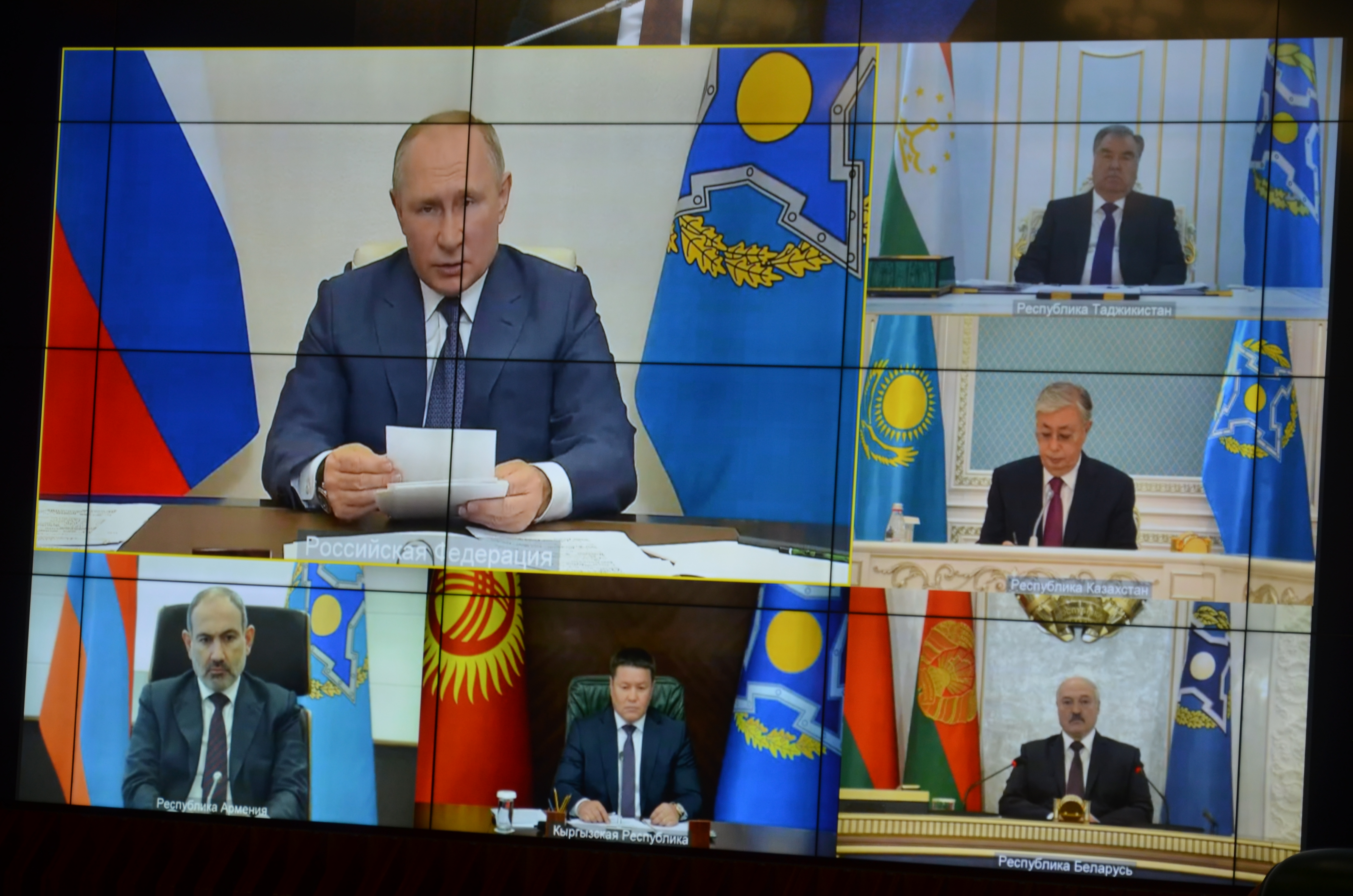 The heads of states have discussed the state of international security and issues of further increasing the effectiveness of the CSTO, the results of the implementation of the decisions of the November (2019) session of the Collective Security Council and the statutory bodies of the Collective Security Treaty Organization in the intersessional period, as well as the possibilities of developing and strengthening inter-parliamentary cooperation of the CSTO member states. The chairman of the CSTO Parliamentary Assembly, Chairman of the State Duma of the Federal Assembly of the Russian Federation Viacheslav Volodin have provided information on this issue.

The CSTO Secretary General noted that quarantine restrictions associated with the coronavirus pandemic have made corrective amendments to the work of the executive and working bodies of the Organization. “Despite this, today we can state that the main tasks set by the CSTO CSС for 2020 and aimed at implementing the Priorities identified by the Russian Federation for the period of the chairmanship in the Organization have been completed,” Stanislav Zas said.

The CSTO CSC has adopted the Declaration of the Collective Security Council, which states that the Organization over the years of its existence has taken a worthy place among the authoritative international and regional organizations, has become an effective factor in maintaining regional stability and sustainable development. "The organization is an effective multifunctional structure for the comprehensive provision of collective security and fully meets the goals of strengthening peace, international and regional security on the basis of universally recognized norms and principles of international law," the CSTO CSC Declaration says.

The Statement on the Formation of a Just and Sustainable World Order. was also adopted. The document notes that one of the main tasks of mankind in the 21st century is the formation of conditions, guarantees and prospects for the harmonious development of future generations. “We are convinced that humanity has the opportunity to jointly ensure the preservation of peace, stability and security for all, to find a worthy response to modern challenges and threats. The solution of the problems facing mankind is possible only in conditions of a just and rational world order based on the generally recognized principles and norms of international law,” the Statement emphasizes.

For the CSTO member states, it was important that this year is commemorated by the 75th anniversary of the Great Victory in the Great Patriotic War of 1941-1945. Russian  President Vladimir Putin, opening the session of the CSTO CSC, especially emphasized that the member states of the Collective Security Treaty Organization should continue to jointly defend the truth about the war. “I am convinced that it is necessary to continue to act in solidarity, defending the memory of the Great Victory, of the feat of our peoples, at the expense of irretrievable losses of which the world was saved from Nazism,” the Russian head of state said. In his opinion, "this is not only a tribute to those who fought the enemy, but also a clear signal to the entire international community about the unity of the Organization's member states and their determination to together defend peace and security."

Vladimir Putin  recalled that units of the armed forces of the CSTO countries participated in the Victory Parade in Moscow in 2020, dedicated to the 75th anniversary of the Great Victory. “We are grateful to the allies in the Organization for supporting the initiatives put forward by Russia on international platforms to preserve the historical truth and counter justification of Nazism in any of its manifestations. All CSTO members became co-authors of the Russian draft of the corresponding UN General Assembly resolution,” the President of the Russian Federation stressed.

The heads of states decided to sign an Agreement on joint Acquisition, Technology, and Logistics and medical support of the Troops (Collective Forces), as well as to amend the Agreement on Peacekeeping Activities of the Collective Security Treaty Organization of October 6, 2007. The changes regulate the issues of participation of the CSTO Collective Peacekeeping Forces in UN operations through an agreement with the coordinating state, which is designated by the Collective Security Council as one of the CSTO member states.

At the same time, the CSTO Secretary General noted that in accordance with the priorities of the Russian chairmanship, work was carried out to develop the CSTO Peacekeeping Forces. “This year it is planned to include a special operations medical unit in the Organization's Peacekeeping Forces,” Stanislav Zas said.

He said that work continued to improve the system of collective response to modern challenges and threats. “The priority task in this direction was to build up joint efforts to combat terrorism and related extremism. Implementing the priorities of the Russian Federation, in order to block recruitment channels, exit/entry of citizens of the Organization's member states to participate in terrorist activities and neutralize the resource base of terrorist organizations, Operation “Mercenary” was successfully carried out under the auspices of the CSTO this year, the CSTO Secretary General said.

A decision was also made on additional measures to improve the system of training personnel for state authorities of the Collective Security Treaty Organization member states. The CSTO CSC has approved the Organization's budget for 2021.

In total, in the course of the CSTO CSC session, 15 documents were approved.