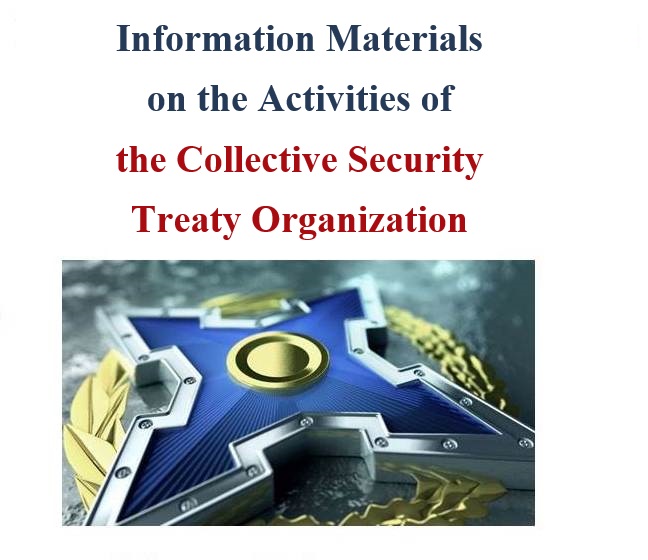 In accordance with the Plan of joint measures for operational and combat training of control bodies command, and force and means generation of the collective security system of the Collective Security Treaty Organization (CSTO) for 2019, from 8 to 29 October, 2019, the joint operational-strategic training "Combat Brotherhood 2019” is held.

An outstanding event with the participation of contingents of the six Organization member states will be held in the territories of the three states of the East European and the Central Asian regions of collective security.

During the operational and combat training activities of the CSTO Troops (Collective Forces), it is planned to work out the issues of preparing a joint operation and command and control of the CSTO CRRF contingents in conducting practical actions to localize the cross-border armed conflict in the East European collective security region. To fulfill combat training tasks by military contingents and formations of special forces during reconnaissance with the combined use of various ground and air-based means, strengthen the state border cover troops, conduct a special operation to block a section of the border of a CSTO member state, defeat and eliminate illegal armed groups.

It is also planned to research the issues of improving the structure of the CSTO force generation (Collective Forces) and organizing their management during joint (peacekeeping operations) in the Central Asian region of collective security.

We invite you to take part in the coverage of practical events of the joint operational-strategic training “Combat Brotherhood-2019”.

The special training “Echelon-2019” with the forces and means of the logistical and technical support of the CSTO member states from October 8 to 10, 2019, in the Russian Federation (the Mulino training ground of the Nizhny Novgorod region).

The special training “Search-2019” ("Poisk-2019") with the forces and means of intelligence of the CSTO member states from October 14 to 18, 2019, in the territory of the Republic of Belarus (training grounds “Obuz-Lesnovsky”, “Domanovsky”, “Chepelevo”). It is planned to depart from Moscow on board of the military-transport aircraft of the Ministry of Defense of the Russian Federation on 11.10.19.

A joint training with the CRRF CSTO "Interaction-2019" ("Vzaimodeystvie-2019") from October 16 to 18, 2019, in the Russian Federation (Mulino training ground, Nizhny Novgorod region).

A joint training with the Collective Rapid Deployment Forces of the Central Asian region and the CSTO Peacekeeping Forces “Indestructible Brotherhood-2019” ("Nerushimoe bratstvo-2019") from October 21 to 29, 2019, in the Republic of Tajikistan ("Harbmaydon" training ground). It is planned to fly from Moscow on board the the military-transport aircraft of the Ministry of Defense of the Russian Federation on October 18, 2019.

The final stages of the trainings with the practical exercises of the troops (forces) are planned to be held on October 10, 18 and 28, 2019 at the mentioned training grounds.

Taking into account the formation of lists for departure to the areas of the above events in advance, we ask you to send data to the posted correspondents before 14-00 (Moscow time) on 08.10.19.

APPLICATION FOR ACCREDITATION OF JOURNALISTS

to participate in a joint