The “Independent Military Review” newspaper: New challenges for the CSTO in Afghanistan

The Organization not only fortifies the borders, but also promotes political dialogue in Central Asia

Об авторе: About the author: Pavel Evgenievich Sorokin is an expert on international security. 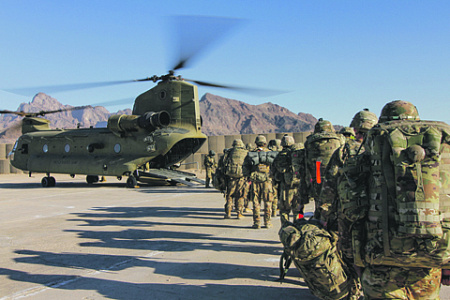 In 20 years of military campaign in Afghanistan, Washington has never achieved its goals.

In the course of the meeting of the Council of Foreign Ministers of the Collective Security Treaty Organization on May 19, in Dushanbe, one of the central themes was maintaining stability in the CSTO member states in light of the withdrawal of the US troops and their allies from Afghanistan.

Having lost about 2,500 troops in 20 years of the campaign and having spent over $730 billion on the operation, Washington did not achieve its goals. These were said to be the defeat of terrorism and the formation of a government capable of effectively controlling the situation in the country.

At present, “The Taliban” remains the most influential force in Afghanistan, while “The Islamic State” (banned in the Russian Federation) retains some influence. In addition, there are many other internationally recognized terrorist groups operating in the country. Even with the direct support of the coalition forces, the pro-government forces were unable to seize the military initiative from the Islamists. And after the expected withdrawal of U.S. troops and their allies, they risk finding themselves in a much more difficult, if not critical, situation.

The departure of the NATO coalition will not only significantly change the balance of power in the Islamic Republic, but will also lead to increased tension on the borders of the Islamic Republic of Afghanistan with the states of Central Asia, creating additional risks for them and the external factors present in the region.

The anti-government groups operating in Afghanistan declare their external goals in various ways. However, the fact that numerous radical groups are concentrated on the borders of the Islamic Republic of Afghanistan with the Central Asian states cannot but cause the most serious concerns. The range of challenges and threats they pose is wide: from drug trafficking, arms smuggling, recruitment of new members to terrorist groups. This situation poses great threats to Russia as well, a country that is actively involved in the region and has a liberal migration regime with its states.

The scale and nature of the dangers dictate the need for the CSTO member states to focus on neutralizing them by measures of a collective nature, and there are serious developments in this area. The fact that the Afghan problem occupies an important place on the Organization's list of priorities is evidenced, in particular, by a number of documents adopted in its format.

Thus, since 2011, the Action Plan to counter challenges and threats coming from the territory of Afghanistan is being implemented. It coordinates political efforts and the work of law enforcement agencies, and also provides assistance to Afghanistan in the training of personnel for the security forces.

Since 2013, in accordance with the decision to provide urgent assistance to the Republic of Tajikistan to fortify the Tajik-Afghan border, the allies have been providing gratuitous military and technical assistance to the Tajik side.

An important factor in Tajikistan's security remains the 201st Russian military base, Russia's largest military facility outside the country, which is also part of the CSTO collective security system.

This year, three military trainings are planned in the Republic of Tajikistan in the immediate vicinity of the border with Afghanistan. These include the large-scale maneuvers of the CSTO Collective Rapid Reaction Forces "Interaction-2021" as well as the police special forces training "Cobalt-2021”.

The CSTO supports the “Heart of Asia – Istanbul Process” regional initiative launched by Afghanistan and Turkey in 2011 aimed at promoting Afghan security. Many member states of the Organization have the status of the program participants. Cooperation between the CSTO and the leadership of the Islamic Republic is maintained at the parliamentary level. The Wolesi Jirga (lower house) of the Legislative Assembly of Afghanistan is an observer in the CSTO Parliamentary Assembly. Russia, the Republic of Kazakhstan and the Republic of Tajikistan are most actively involved in issues related to the intra-Afghan settlement.

The CSTO's capacity to combat challenges and threats will allow it to keep the situation in its area of responsibility under control in any, even the most negative, scenario. Nevertheless, bearing in mind the dynamics of the situation, member states need to intensify the implementation of planned measures. And also to consider the issue of closer coordination of efforts with other states and international structures, acting in the Central Asian region. From this point of view, it is especially promising to expand interaction with the Shanghai Cooperation Organization (SCO), which includes almost all of Afghanistan's neighbors, and Kabul itself has the Observer status.

Another issue is that the Republic of Uzbekistan and the Republic of Turkmenistan, which border the Islamic Republic of Afghanistan, traditionally refrain from participating in collective actions related to Afghanistan, preferring to work in a bilateral format. However, there are hardly any guarantees that once the coalition leaves and regains freedom of action, the leaders of radical Afghan groups will not be tempted to violate the agreements reached. In any case, Tashkent and Ashgabat should not discount interaction with CSTO countries, given the serious interest of the Organization in the security of all Central Asian countries, regardless of their military and political orientation.

China, which remains an important political partner and key investor in the Central Asian states, could make an important contribution to regional stability.

Of course, the further actions of the United States deserve special attention. Washington's statements about the complete withdrawal of troops arouse some skepticism among some experts, who believe that only regular units could be withdrawn. They could be replaced by employees of private military companies.

But regardless of the validity of these suspicions, it is obvious that the United States is interested in strengthening its presence in the states neighboring the Islamic Republic of Afghanistan. In this regard, Washington officials mentioned the Republic of Uzbekistan and the Republic of Tajikistan.

However, Tashkent immediately responded by saying no, citing the norms of law that rule out the possibility of placing foreign military bases in the Republic. The Americans are also unlikely to hear a positive response in Dushanbe, for the reason that the CSTO countries have taken the obligation not to place bases of third countries on their territory without the consent of other member states of the Organization. Representatives of the Russian Foreign Ministry and the Foreign Intelligence Service have already expressed the view that the presence of U.S. troops in Central Asia is not necessary for the security of these countries.

Focusing exclusively on military-police methods will not help achieve the main goal of establishing lasting peace in Afghanistan and turning it into a full-fledged political and economic partner. The potential for cooperation with a country ravaged by long wars and in need of almost complete reconstruction of its infrastructure is enormous. In this regard, further international efforts to develop intra-Afghan dialogue and involve Afghanistan in regional projects should be no less important components of the new approach.