The final stage of the joint training "Interaction-2021" and special trainings "Search-2021", "Echelon-2021" was held in the Republic of Tajikistan 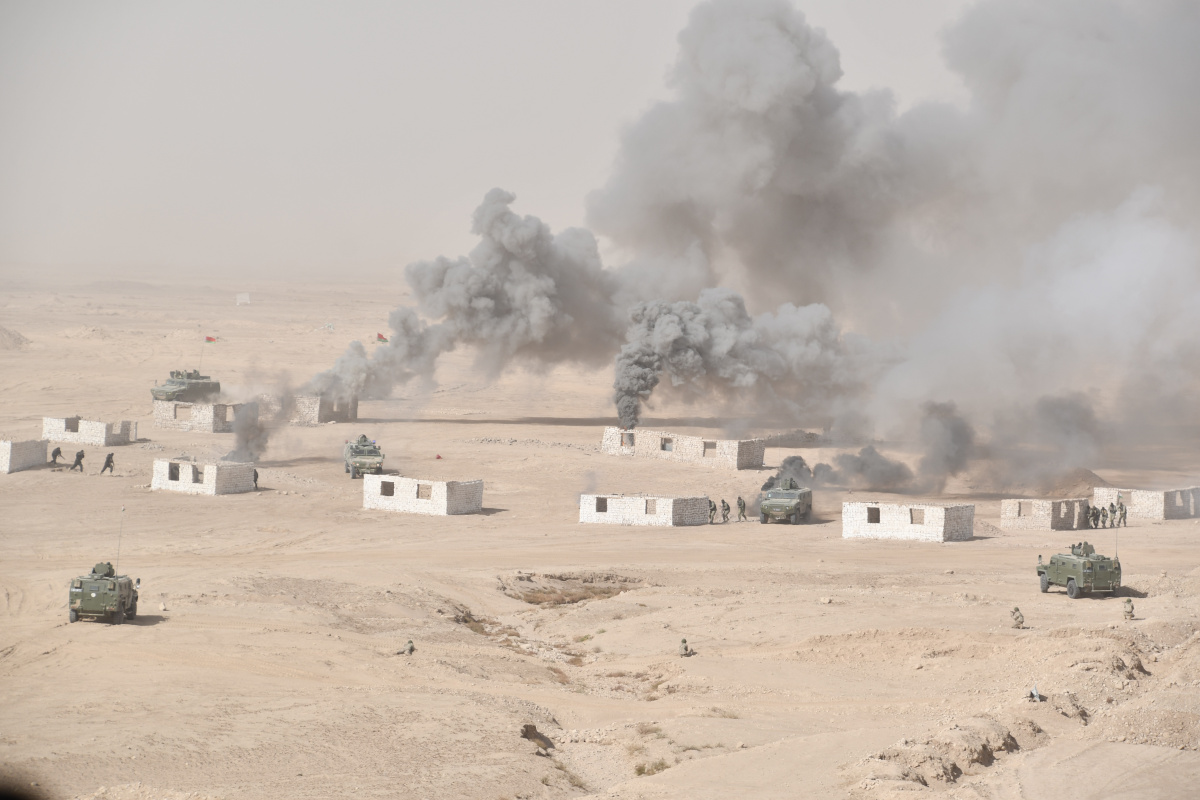 On October 23, this year, the final stage of trainings "Interaction-2021", "Search-2021" and "Echelon-2021" took place in the Republic of Tajikistan at the training range "Kharbmaidon", 20 km from the Tajik-Afghan border. In the course of this stage, a grouping of CSTO troops (Collective Forces) conducted a joint operation to contain a border armed conflict associated with attempts by international terrorist organizations to penetrate the territory of a CSTO member State.

Military contingents of the Organization's member States, consisting of mobile formations and military units of permanent readiness equipped with modern weapons and military (special) equipment, task forces of the CSTO Joint Staff and the CSTO Secretariat, special-purpose force formations from special units of internal affairs (police) bodies, security agencies and special services, and authorized bodies for the prevention and management of emergency situations took part in the training. In total, there were 4 thousand people and more than 500 units of equipment, including planes L-39, Su-25, Su-24MR, Il-76TD, helicopters Mi-8 and Mi-24. 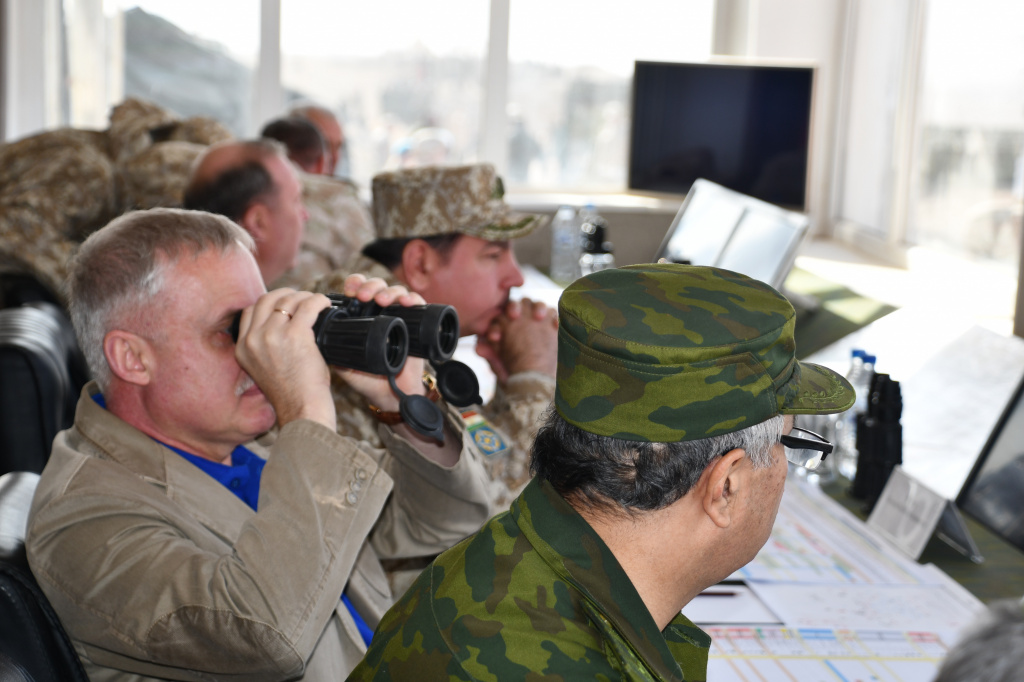 During the final stage the actions of the Collective Forces were observed by the CSTO Secretary General Stanislav Zas, the Minister of Defense of the Republic of Tajikistan, Colonel General Sherali Mirzo, the Chief of the CSTO Joint Staff, Colonel General Anatoly Sidorov, and the Commander of the Central Military District of the Russian Federation, Colonel General Alexander Lapin.

Members of the Coordination Meeting of the Chairmen of the Committees (Commissions) on Defense and Security of the Parliaments of the CSTO Member States under the Council of the CSTO Parliamentary Assembly, as well as representatives of the International Committee of the Red Cross came to the training range as observers.

According to the plan of the trainings, at the beginning of practical actions of the troops (forces) at the “Harbmaydon” training range, a pair of L-39 aircraft of the Air Force of the Republic of Tajikistan and an Su-24MR reconnaissance aircraft of the Russian Federation conducted an aerial reconnaissance of the area and detected columns of "militants" crossing the state border.

In order to prevent further advance of the simulated enemy into the area of training and combat missions, Mi-8 helicopters landed special purpose groups of the armed forces of Russia and the Republic of Tajikistan, which ensured the advance of the first echelon of the collective forces.

At the same time, two pairs of Russian Su-25 attack aircraft carried out a group air strike with unguided rockets against the advancing enemy. At the defensive line, a company task group of the 201st military base and a motorized rifle company of the armed forces of the Republic of Tajikistan fought the simulated enemy.

At the direction of the advancement of reserves of simulated illegal armed groups, the engineering units of the collective forces carried out an explosive berm of 500 meters in length. Russian and Tajik artillery forces used the Syrian method of "Layer Pie" to destroy the "militants" in vehicles. The terrorists' armored off-road vehicles were destroyed by anti-tank guided missiles. The "enemy" strike drone attack was repelled by the anti-aircraft missile squad of "Verba" man-portable air defense system and anti-aircraft artillery platoon ZU-23 of the 201st Military Base together with anti-aircraft units of the armed forces of the Republic of Tajikistan. 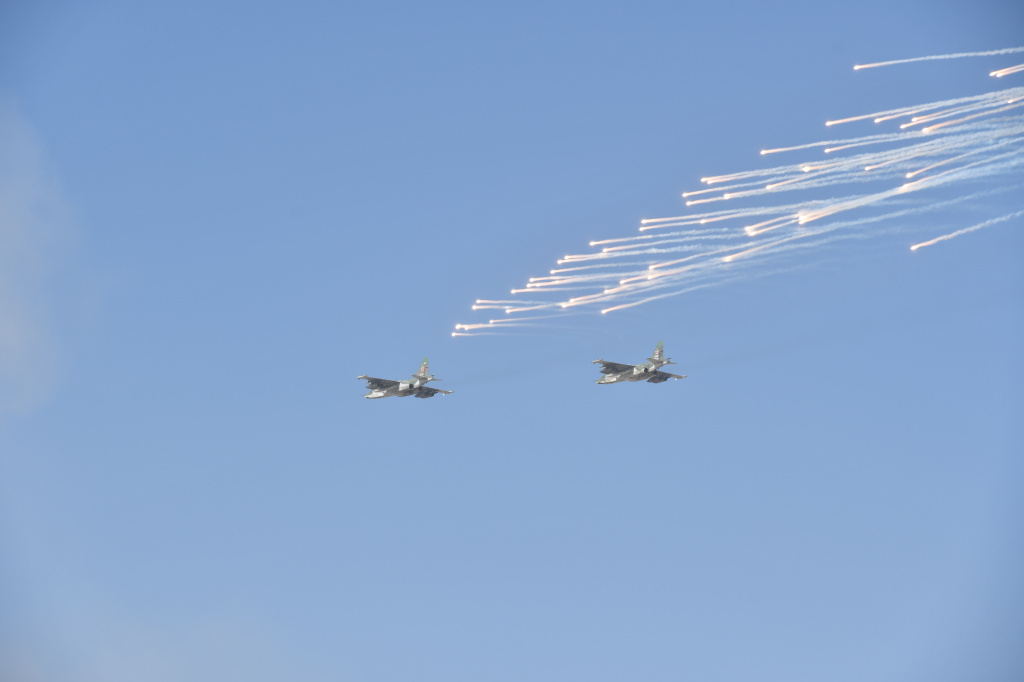 Also in the course of the practical actions, fire from long-range and high-powered RPO-PDM-A rocket flamethrowers destroyed manpower, equipment and firing points of the “militants”.

In order to exclude the possibility of the enemy reaching the rear of the advancing units, tactical airborne landing of the units of the armed forces of the Republic of Belarus and the Republic of Kazakhstan is carried out by landing.

Two pairs of Mi-8 transport-combat helicopters of the Russian Federation and the Republic of Tajikistan carry out the landing of tactical airborne troops.

To complete the defeat of the simulated enemy after the opening and blocking of the 201st Military Base maneuver team, equipped with modern electronic warfare complex "Borisoglebsk-2", units of the second echelon of collective forces consisting of units of Russia, the Republic of Tajikistan and the Kyrgyz Republic were brought into action. A pair of Russian Mi-24 helicopters provided fire support to the attacking units using the "Helicopter Carousel" tactic, which has been used successfully in the Syrian Arab Republic.

In the course of the practical actions of the second echelon units, they carried out an attack on a simulated enemy with Su-25 attack aircraft using S-8COM unguided air missiles, blocked communications in the combat area using radioelectronic combat complexes and landed airborne troops of the Airborne Troops of the Russian Federation and special operations forces of the Republic of Belarus. The group of "militants" was eliminated by the Belarusian servicemen with small arms fire and grenade launchers. In addition, the "Alpha" special unit together with the Tajik special police detachment fulfilled the task of blockading and liberating the settlement from the suspected militants.

At the end of the practice, paratroopers from the armed forces of the Russian Federation and the Republic of Belarus fought a retreating enemy, blocking its retreat in the direction of the state border.

After the defeat of the enemy, the Tajik Ministry of Emergency Situations units practiced eliminating the aftermath of the battle and providing aid to the injured. 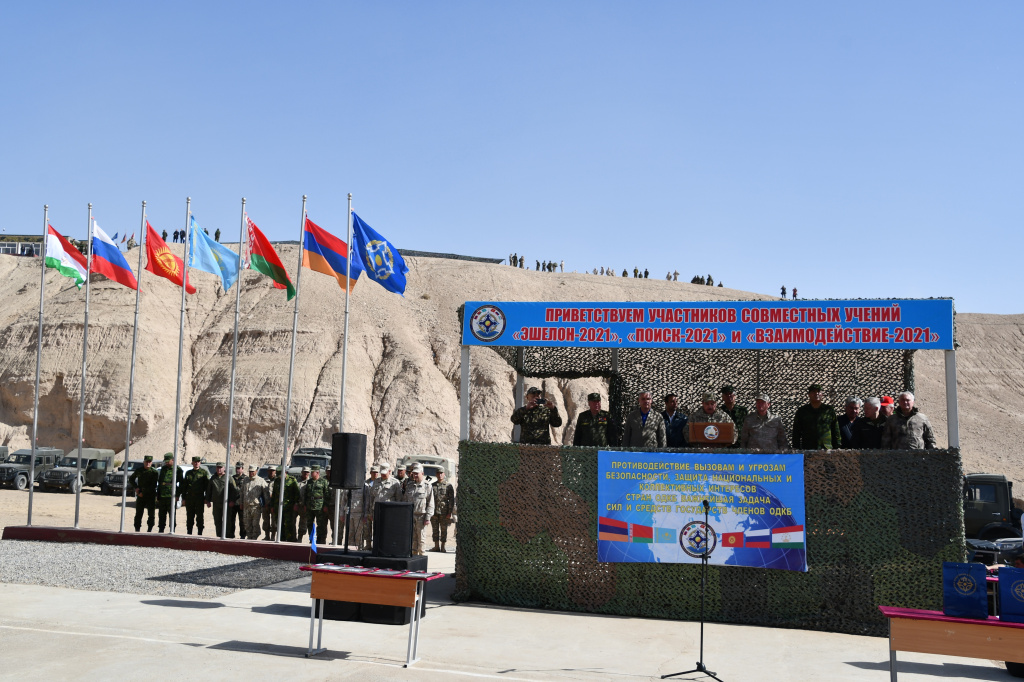 The Tajik Defense Minister Colonel General Sherali Mirzo said at the closing ceremony of the trainings of the Collective Rapid Reaction Forces that "a catastrophic situation is developing in Afghanistan: the lack of a legitimate and inclusive government, functioning mechanisms of state power, and systematic violations of human rights”. According to him, these factors "have brought Afghanistan to the edge of a humanitarian catastrophe, contribute to its further transformation into a breeding ground for international terrorism, which poses a serious threat to security and stability in the region.

"The events of recent months related to the withdrawal of international coalition troops from the territory of Afghanistan and the inability of government forces to independently ensure control over the entire country have contributed to a surge of terrorist activity and led to a complete degradation of the military-political situation," the head of the military department of the Republic of Tajikistan said.

Speaking to the contingents of the Collective Forces that took part in the training, the CSTO Secretary General said that the past trainings once again demonstrated the increased level of preparedness of their command and control bodies, military units and subunits. "All these events have demonstrated the ability of the Organization's Collective Forces to carry out tasks to protect the sovereignty and territorial integrity of CSTO member States," Stanislav Zas said.

At the same time, he stated that we assume that any conflict situations must be resolved peacefully, through negotiations and dialogue. "But if aggression is committed against any of the CSTO member States, the military component of the Organization must be ready to repel it. This readiness has been confirmed in the past trainings. The CSTO Collective Forces have shown their ability to act in a coordinated and professional manner, shoulder to shoulder in a united brotherly formation, to act in a complex, rapidly changing situation," the CSTO Secretary General stressed. 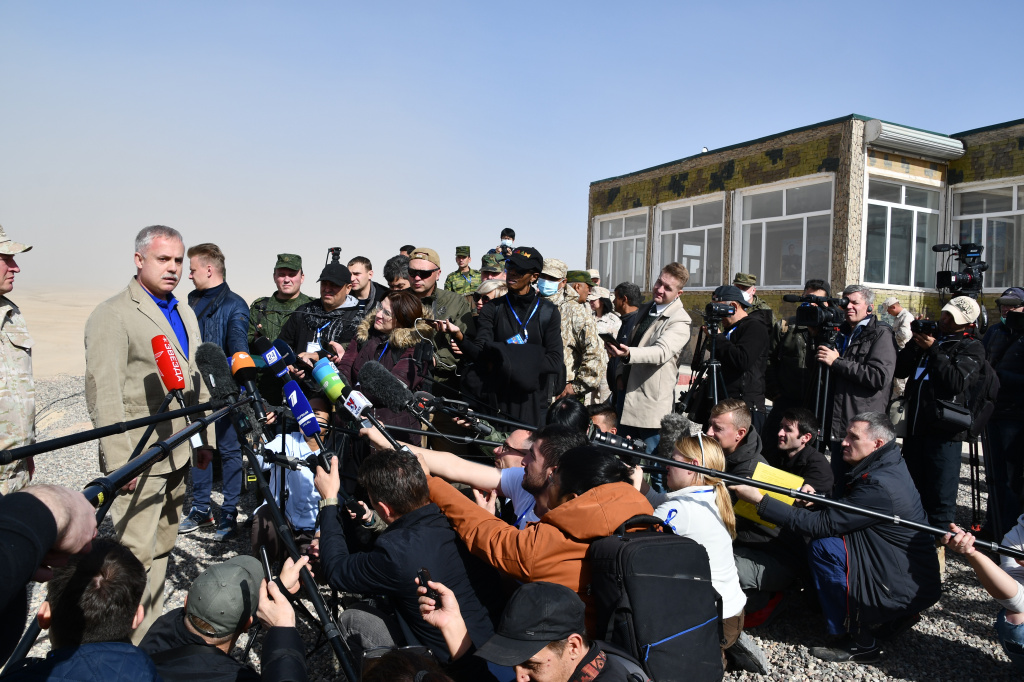 Stanislav Zas commented to the media after the end of the final stage of the trainings that the Collective Security Treaty Organization (CSTO) Collective Forces showed at the operational and strategic training "Combat Brotherhood-2021" that the Republic of Tajikistan was reliably protected from terrorist incursions. "We did not practice war with Afghanistan during these trainings. On the contrary, the CSTO member States stand for a peaceful, prosperous Afghanistan, free of war, terrorism, drugs, where people live and build their lives," Stanislav Zas said. – The CSTO Collective Forces have demonstrated to the world, including our detractors, that this land is reliably protected, that any intimidation will be stopped and the Republic of Tajikistan will never be left alone with its misfortune. This was also one of the goals of the training, and we have achieved it. He noted that the training of the Collective Forces included the elimination of terrorist groups and illegal armed groups, "which exist in reality and are a direct threat - both to our countries and to Afghanistan itself.

Training of the CSTO Collective Rapid Reaction Forces were held at the “Harbmaydon” training range from 18 to 23 October.