At the visiting session of the Coordination Meeting of the Chairmen of the Committees on Defense and Security of the Parliaments of the CSTO member states, the military-political situation in the area of responsibility of the Organization was discussed 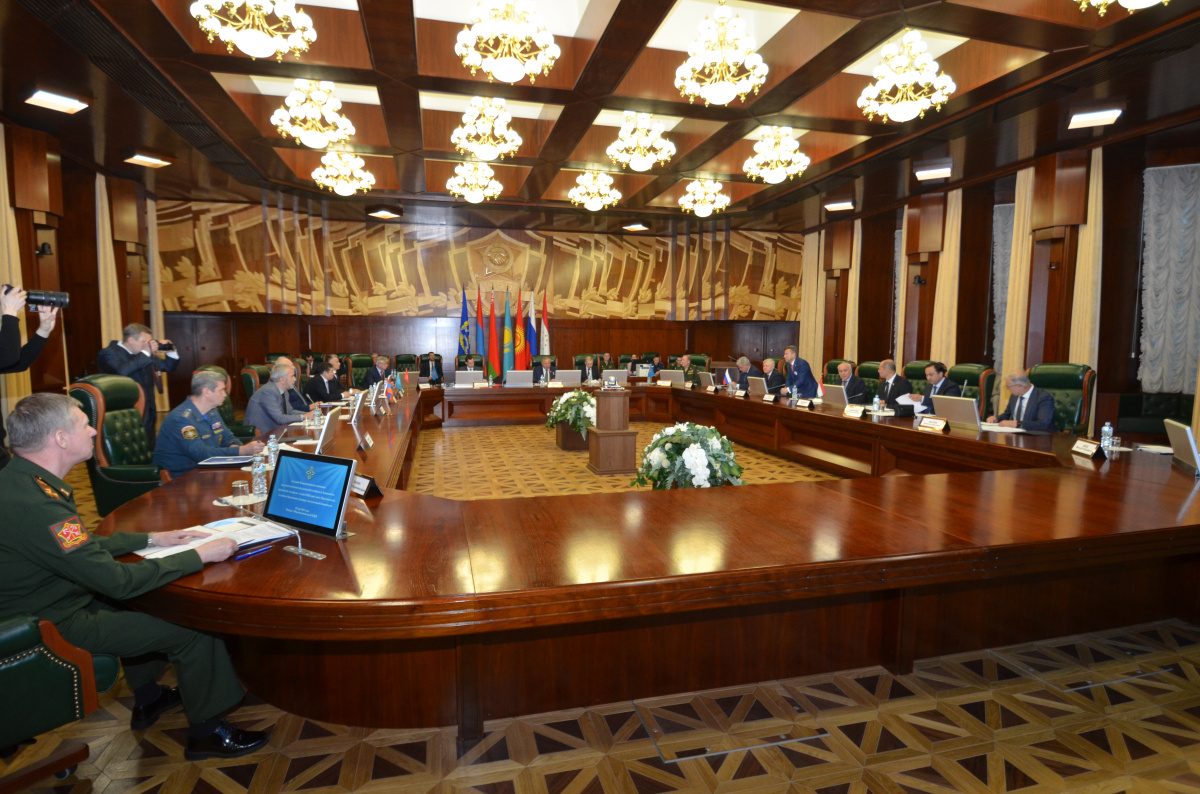 The members of the Coordination Meeting, together with the Heads (representatives) of the competent authorities of the Russian Federation, discussed in detail the state of the military-political situation in the Eastern European region of collective security of the Collective Security Treaty Organization.

The parliamentarians heard a report by the Deputy Secretary General of the Collective Security Treaty Organization Valery Semerikov.

He assessed the general military-political situation in and around the CSTO area of responsibility, as well as informed about countering the challenges and threats to collective security, the state and prospects of military cooperation within the framework of the Collective Security Treaty Organization at the present stage.

Valery Semerikov noted that the United States and NATO are building up their military groupings and military infrastructure in the territories of the Eastern European countries and the Baltic States in close proximity to the western borders of the CSTO member states. "At the same time, they are also carrying out the dismantling of the international arms control system," he stressed.

Referring to the situation in the Caucasian region of collective security, the CSTO Deputy Secretary General said that after the adoption on November 9, 2020 of the trilateral Statement of the President of Azerbaijan, the Prime Minister of Armenia and the President of Russia on the cessation of hostilities in the zone of the Nagorno-Karabakh conflict, the situation there has generally stabilized. “The introduction of the Russian peacekeeping contingent and the ongoing negotiation process are strengthening the prospects for establishing long-term peace,” said Valery Semerikov. At the same time, he noted that the recent aggravation on the Armenian-Azerbaijani border requires urgent measures, "first of all, of a political and diplomatic nature, and the resolution of issues on the demarcation and delimitation of the state border between Armenia and Azerbaijan."

He paid special attention to the situation in the Central Asian region of collective security. “The geostrategic position of Central Asia, with its hydrocarbon reserves, mineral resources and transport communications, make the region a zone of rivalry between the world poles of power for securing its influence. And the presence of such problems as a shortage of water resources, unsettled borders, challenges and threats emanating from the conflict zones in Afghanistan and the Middle East as a whole exacerbate the vulnerability of the Central Asian states from negative external influences,” said CSTO Deputy Secretary General Valery Semerikov.

According to him, taking into account the situation in this region, the threats emanating from the territory of Afghanistan, the CSTO is consistently carrying out a set of measures aimed at reducing tension in the Tajik-Afghan border area. “In particular, we have made serious progress in developing the Target Interstate Program to strengthen the Tajik-Afghan section of the state border,” Valery Semerikov noted.

At the end of his speech, he expressed gratitude to the Coordination Meeting of the Chairmen of the Committees and Commissions on Defense and Security and the Secretariat of the CSTO PA for the constant attention and support of the activities of the CSTO Secretariat and the CSTO Joint Staff.

The meeting participants also heard the report of the Chairman of the Standing Committee of the National Assembly of the Republic of Armenia on Defense and Security Issues Andranik Kocharian "On the military-political situation in the Caucasian region of the collective security of the Collective Security Treaty Organization", where he assessed the situation in the regions of the Syunik region of Armenia bordering on Azerbaijan and noted the inadmissibility of encroachments on the territorial integrity of the CSTO member state.

Colonel-General Anatoly Sidorov, Chief of the CSTO Joint Staff, made a report on joint trainings with the CSTO Troops (Collective Forces) in 2021. He noted that when planning the preparation and conduct of the trainings, the current military-political and strategic situation in the CSTO area of responsibility, the orientation of the training of command and control bodies and formations of forces and means of the collective security system are taken into account.

These events will begin with a Joint Business Game under the leadership of the CSTO Secretary General Stanislav Zas with the involvement of operational groups of interested ministries and departments of the CSTO member states, as well as the Permanent Council of the Organization. At the first stage, it is planned to work out proposals on political and diplomatic measures to resolve the crisis situation. The second stage will be aimed at working out the issues of involving the CSTO Troops (Collective Forces).

"During these events, it is planned to work out the issues of the consistent use of the components of the CSTO Troops (Collective Forces), starting from a joint operation to localize a border armed conflict, and ending with a post-conflict settlement during a peacekeeping operation," said the Chief of the CSTO Joint Staff.

On the same day, the meeting participants visited the CSTO Crisis Response Center, the military-historical exhibition of the International Military Center, as well as the "Patriot" Military-Patriotic Park, the Main Temple of the Armed Forces of the Russian Federation, "The Memorial Road" museum complex and laid flowers at "The Mother winners" monument ".