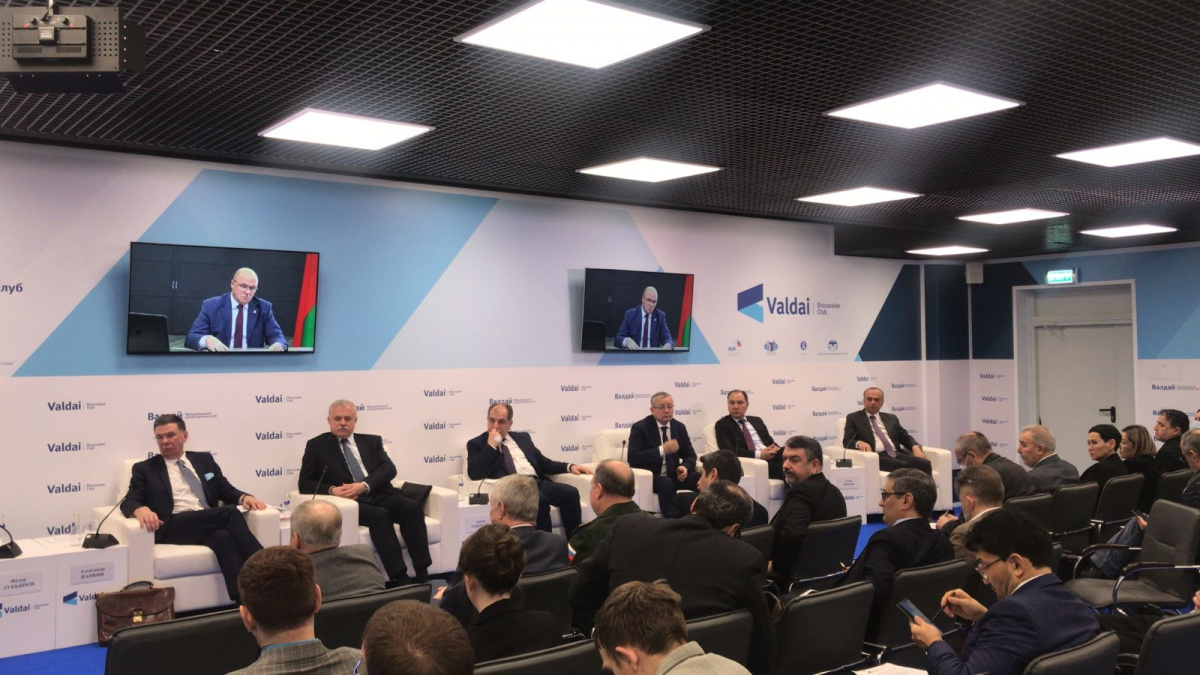 On February 9, 2022, the CSTO Secretary General Stanislav Zas participated in the conference "Collective Security in a New Era: CSTO Experience and Prospects" held at the "Valdai" International Discussion Club with the support of the Russian Foreign Ministry. During his speech, Stanislav Zas informed about the most acute challenges and threats to the security of the CSTO member States, as well as measures taken by the CSTO to counter them.

During his speech, Stanislav Zas noted that one of the most serious challenges to collective security remained the situation in Afghanistan. "We see that at present there is no direct threat of military expansion by the Taliban into neighboring states, including the territory of the CSTO member State Tajikistan. At the same time, such threats as terrorism and drug trafficking remain urgent. In conditions of social and economic crisis and humanitarian catastrophe in Afghanistan, the urgency of these threats increases because band formations, terrorist organizations and narcotics trade as one of the sources of survival of people are activated. Of course, we take this into account, and we intend to continue paying maximum attention to the strengthening of the Tajik-Afghan border," Stanislav Zas reported.

Stanislav Zas touched upon the recent aggravation on the Kyrgyz-Tajik border. "The two CSTO member States, Tajikistan and Kyrgyzstan, demonstrate the ability to quickly and independently contain incidents and reduce tension. This is an encouraging circumstance. But the cause of the problem is seen in the incomplete demarcation and delimitation of the border," he said.

The Secretary General noted that the Organization welcomed the resumption of the work of the joint commission on the delimitation and demarcation of the border, as well as other steps that would exclude such incidents. "We also welcome all other steps, such as joint patrols of disputed areas, which will avoid clashes and, even more so, the use of weapons. We strongly believe that all these issues should be resolved peacefully," he stressed.

Speaking about recent events in the Republic of Kazakhstan, the Secretary General noted: "The CSTO operation demonstrated unity and readiness to defend collective interests together. We gained our first practical experience and were convinced that the forces and means at our disposal, as well as the mechanisms of their application that have been created over 20 years, are really functioning and allow us to solve the tasks that our Organization faces. This peacekeeping operation really contributed to the cessation of terrorist attacks and bloodshed and led to the stabilization of the situation in the Republic of Kazakhstan.

Stanislav Zas emphasized that at the same time, the CSTO was conducting a serious analysis of collective actions during the crisis in the Republic of Kazakhstan, for which purpose a special Working Group had been created. "We will test, first of all, the crisis response system. We need to be able to quickly and effectively use the available capabilities under any conditions and at any point in our area of responsibility," he said.

As the CSTO Secretary General noted, the situation on the Armenian-Azerbaijani border remained unstable. "I was there, I saw what was happening with my own eyes. In fact, there is no border as such, there is a line of contact, strongholds and observation points. There are periodic exchanges of fire. It shouldn't be like this," he said.

According to Stanislav Zas, the sides are currently facing a serious task of delimitation and demarcation of the interstate border. This is a large and difficult work, but it will nevertheless significantly strengthen the security of the region: "There is cautious optimism that an entire era of war is ending, and another era is beginning. I could be wrong about this optimism, but in any case, the steps that are being taken to establish peace should be welcomed." Answering the journalists' questions, the Secretary General clarified that the Organization would react if events around the Republic of Armenia develop negatively. "If conditions arise and there is such an appeal, all our emergency response centers and mechanisms will be launched," he said.

As one of the threats to peace and stability in the CSTO area of responsibility Stanislav Zas named the actions taken by the NATO states on the western borders of Russia and the Republic of Belarus. "There is a significant build-up of military forces and development of military infrastructure of NATO on the western borders of the CSTO area of responsibility. In fact, militarization of the entire region is happening. It poses a threat not only to the Republic of Belarus and Russia, but also negatively affects the security of the whole CSTO. I have the courage to speak on behalf of the Organization, because such a formulation is contained in the CSTO Collective Security Strategy until 2025”. - Stanislav Zas stated.

In conclusion, Stanislav Zas stressed that the strategic goal of the organization remained the strengthening of peace and international security while maintaining political methods as an unconditional priority. To this end, the CSTO plans to increase political cooperation among its member States and develop cooperation with other countries and international organizations.