On September 16, in Dushanbe, the Collective Security Council has discussed international and regional security problems and their impact on the security of CSTO member States 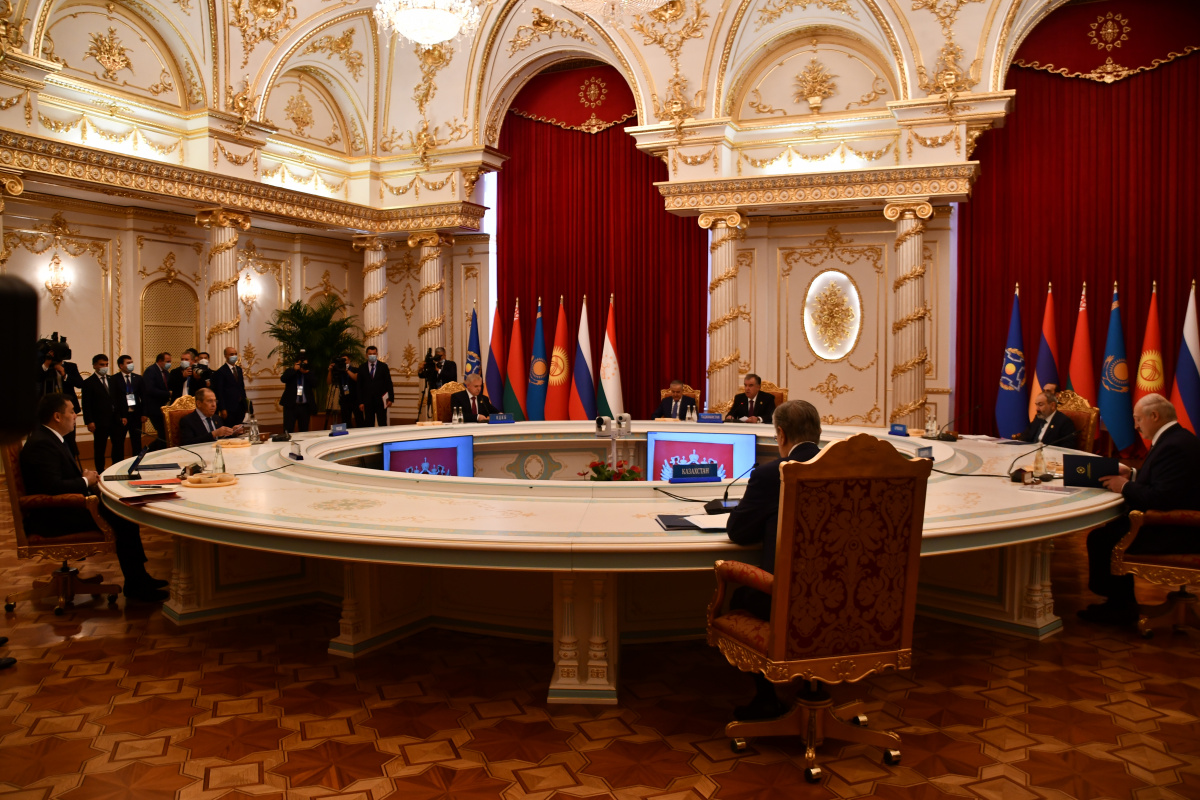 The Declaration of the CSTO member States was adopted, the Plan to equip the CRRF with modern arms and military equipment and important documents on the development of the CSTO peacekeeping capabilities were signed ОДКБ

The CSC members have discussed current international and regional security issues and the main results of the Collective Security Treaty Organization's activities during the intersessional period. One of the most important issues was the situation in Afghanistan and its impact on the CSTO member States security.

With the Republic of Armenia taking over the CSTO presidency in 2021-2022, the Armenian Prime Minister Nikol Pashinyan presented the country's priorities to be implemented.

The CSTO Collective Security Council session, which after a long break because of the pandemic, was held in person on the hospitable land of the Republic of Tajikistan, has just ended. I would like to thank the Tajik side for the excellent organization of the event. We accomplished all the tasks we had set for ourselves. I will briefly inform you about its results.

In the course of the CSC meeting, which was held in a small number of participants and in the format of plenary session, we discussed in detail the state and prospects of development of the international and regional situation and its impact on the security of the member States of the Collective Security Treaty Organization and summarized the results of our work during the intersessional period.

Unfortunately, we do not see any positive changes in the sphere of global and regional security. The situation along virtually the entire perimeter of the borders of CSTO member States remains tense.

One of the main issues the heads of state discussed today was the situation in Afghanistan, which has changed dramatically after the withdrawal of the U.S. troops and the NATO military contingent from there.

The rapid offensive of the “Taliban”, the transition of almost the entire territory of Afghanistan under their control, including the state borders and the capital, Kabul, as well as the change of government in the country, significantly affect the situation in the Central Asian region of the collective security of the CSTO and cause us deep concern.

The CSTO is closely monitoring developments on the Tajik-Afghan border. The main goal of the Organization in the emerging circumstances remains to ensure the security of the CSTO member States. At the same time, we continue to give priority in our activities to political and diplomatic means.

The presidents of the CSTO member States agreed to make additional efforts to develop cooperation in counteracting challenges and threats emanating from the territory of Afghanistan. The organization has worked out practical collective measures to ensure Tajikistan's security in the event of a worsening of the border situation. For the same purpose, a series of large-scale trainings of the CSTO Collective Forces will be held near the Tajik-Afghan border in a month: "Search-2021", "Echelon-2021", "Interaction-2021" and "Cobalt-2021", all of them will be held according to a single plan.

An agreement was reached to accelerate the adoption of Tajikistan's Special Interstate Policy on Strengthening the Tajik-Afghan Border, proposed within the CSTO. The Republic of Tajikistan, as you know, has the longest border with Afghanistan - 1,344 km, which in many parts runs in inaccessible mountainous terrain.

The Presidents noted the high level of Tajikistan's chairmanship of the Organization in 2020-2021 and the implementation of priorities during this period.

The Republic of Armenia will hold the presidency of our Organization during the next intersessional period. The country's Prime Minister Nikol Pashinyan presented to the Collective Security Council the country's priorities, which are planned to be implemented. They will be reflected in the relevant Plan for the implementation of the decisions of the SCS session.

In the course of today's CSC session a Declaration of the Collective Security Council of the Collective Security Treaty Organization, was adopted which expresses serious concern about the continuing high level of threat to the security and sovereignty of states within the CSTO area of responsibility and emphasizes the determination to work consistently to strengthen international and regional security and a just resolution of international problems on the basis of universally recognized norms and principles of international law.

"We are in favor of increasing the effectiveness of multilevel political consultations of the CSTO member states, in which agreed collective responses to emerging challenges and threats are developed.

The CSTO member States will continue to work together to develop the institutions of Observer under the CSTO and CSTO Partner to improve the system of external relations of our Organization and enhance its ability to contribute to strengthening international and regional security.

The member States will also continue the progressive development of collective security forces and capabilities in order to improve their readiness to fulfill their assigned tasks.

Important documents were also signed concerning the development of the CSTO's peacekeeping potential, to which we pay particular attention. A Protocol on Amendments to the Agreement on Peacekeeping Activities of the Collective Security Treaty Organization of October 6, 2007 was signed. These changes provide for the possibility of involving CSTO peacekeeping forces in peacekeeping operations under the auspices of the United Nations through a "coordinating CSTO member State," the Declaration says.

Another innovation is the establishment of the institution of the Special Representative of the CSTO Secretary General for Peacekeeping, for which a separate CSTO Collective Security Council decision was signed.

The heads of states have also approved the Plan to equip the CSTO Collective Rapid Reaction Forces with modern weapons, military and special equipment and special facilities. This is a very important and timely document, the implementation of which will make it possible to raise our CRRF to a new qualitative level.

In connection with the changing situation in Afghanistan, the Plan of Operational Deployment of the Organization's Collective Forces in the CAR and the composition of military contingents and formations of special forces of the CSTO CRRF.

The list of documents signed as a result of the session includes an Agreement on joint logistical and medical support for Collective Security Treaty Organization troops (Collective Forces).

The presidents signed an Agreement on jurisdiction and legal assistance in cases involving the temporary presence of formations of collective security assets on the territories of Collective Security Treaty Organization member States. The document regulates the establishment of a mechanism for cooperation among the competent bodies of the CSTO member States: military police, military investigation, military prosecutor's office, military courts (tribunals) - in criminal and administrative cases involving persons belonging to formations of collective security assets.

In May 2022, as you know, our Organization will celebrate 30 years since the signing of our founding document, the Collective Security Treaty, and the 20th anniversary of the CSTO itself. The CSC has approved the relevant action plan to commemorate this big anniversary. It provides for various organizational, foreign policy, military-technical, military-economic, cultural-educational, scientific-practical and other events.

The Collective Security Council extended for three years the term of office of Colonel General Anatoly Sidorov, the Chief of the CSTO Joint Staff (which was expiring just these days), and approved Yuri Borisov, the Chairman of the CSTO Interstate Commission for Military and Economic Cooperation, who again became Deputy Prime Minister of the Russian Federation for another three years.

The 2022 budget of the Collective Security Treaty Organization was also approved.

Thank you for your attention. ***"

The next session of the Collective Security Council will be held already in Yerevan in the 4th quarter of 2022. A separate protocol decision was adopted on this occasion.