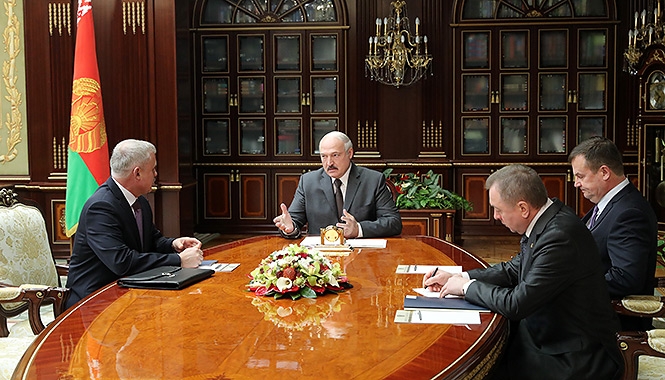 On March 5, 2020, the President of the Republic of Belarus, Alexander Lukashenko, met with the Secretary General of the Collective Security Treaty Organization, Stanislav Zas, who is in Minsk on a visit. “Belarus will remain committed to integration processes, but with strict adherence to its interests,” Alexander Lukashenko said at the meeting, as the official website of the President of Belarus reports.

“If such a fate has fallen for Belarus this year to head all integration bodies, we will do it with dignity,” said Alexander Lukashenko. “We will, as before, be committed to integration processes, including in the military sphere, but we will clearly follow our interests. " 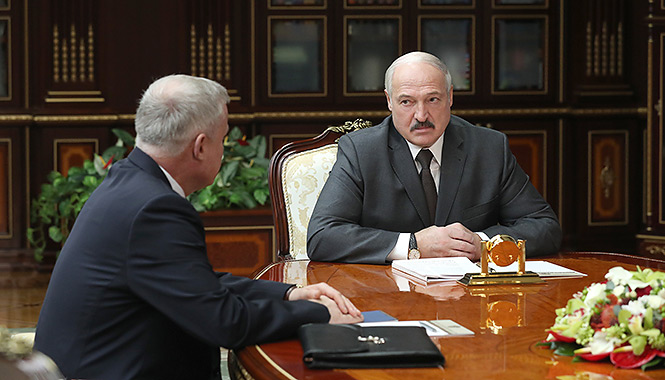 The President emphasized that the interests of Belarus should be respected in all integration associations, including within the framework of the CSTO. So far, according to the head of state, they absolutely coincide with the interests of neighboring countries and especially members of the Organization. “They coincide with the interests of both Russia and other members of the CSTO. And they don’t really contradict the interests of Ukraine, our main southern neighbor. At least we did and will do everything to ensure that Ukraine is peaceful and calm, - said Mr. Lukashenko. "This is our position, coming again from the mentality of the Belarusian people. We will adhere to it."

This year Russia will host a meeting of the CSTO Collective Security Council. In this regard, the President of Belarus took an interest in the agenda of the forum, how is work going on promoting proposals from Belarus on the development of the organization. The Republic of Belarus, in his words, stands for strengthening the international authority of the CSTO and expanding its interaction with other platforms. “This may include, among other things, the implementation of a decision taken on the initiative of Belarus on legalizing the status of a Partner of the organization, as well as the Observer at the CSTO. How are these issues moving forward? I would like us to solve them at the next summit,” said Mr. Lukashenko.

The President of the Republic of Belarus also asked Stanislav Zas how the work is being organized in the Secretariat of the Organization. “If you need some kind of staffing, tell me, and I will be the initiator at the next meeting of the SKB. We’ll talk with Vladimir Vladimirovich (Putin. - BelTA) and other presidents on this issue to be completely clear. If the Secretariat works, how before, the Collective Security Treaty Organization will work in this way. Neither the situation nor the time allow us to relax today, "said Mr. Lukashenko. 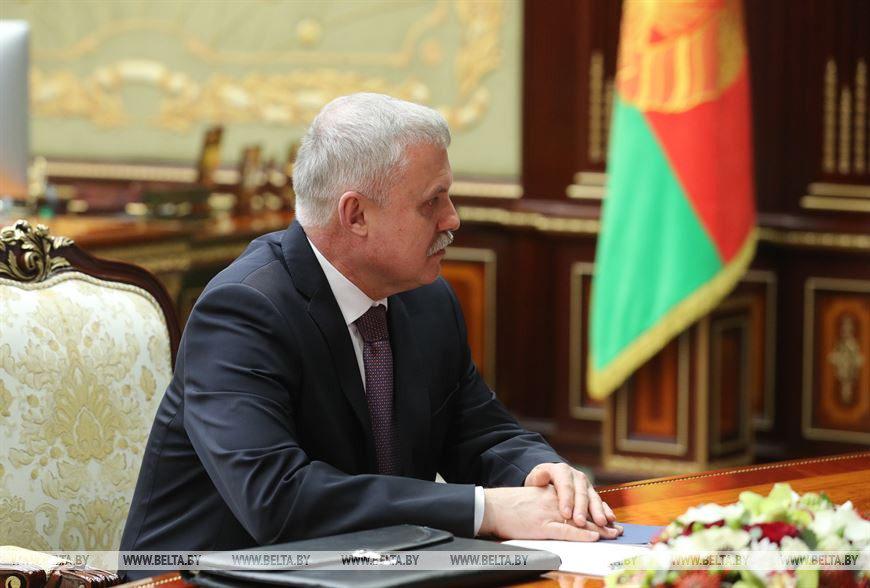 Stanislav Zas informed the Belarusian leader that the CSTO countries will hold several joint events this year to give impetus to the fight against challenges and threats to collective security. Among them, the anti-drug operation "Channel" has already become traditional. It will take place in two stages: security officials plan to block the "northern route" of drug supplies from Afghanistan and take measures to combat the spread of synthetic drugs. The headquarters will be located in Dushanbe and St. Petersburg. In addition, planned to suppress illegal migration "Illegal" and to combat crimes in the field of information technology "Proxy".

Another issue that was discussed by Alexander Lukashenko and Stanislav Zas was related to improving the effectiveness of military-economic cooperation between the CSTO countries. An exhibition of military equipment and weapons will be held in Yerevan in March, where representatives of the organization’s member countries are planning to discuss this topic in detail. “We need to work with the CSTO states to remove the problems that exist in the sphere of military-economic cooperation. There are enough of them,” the CSTO Secretary General told reporters following the meeting. 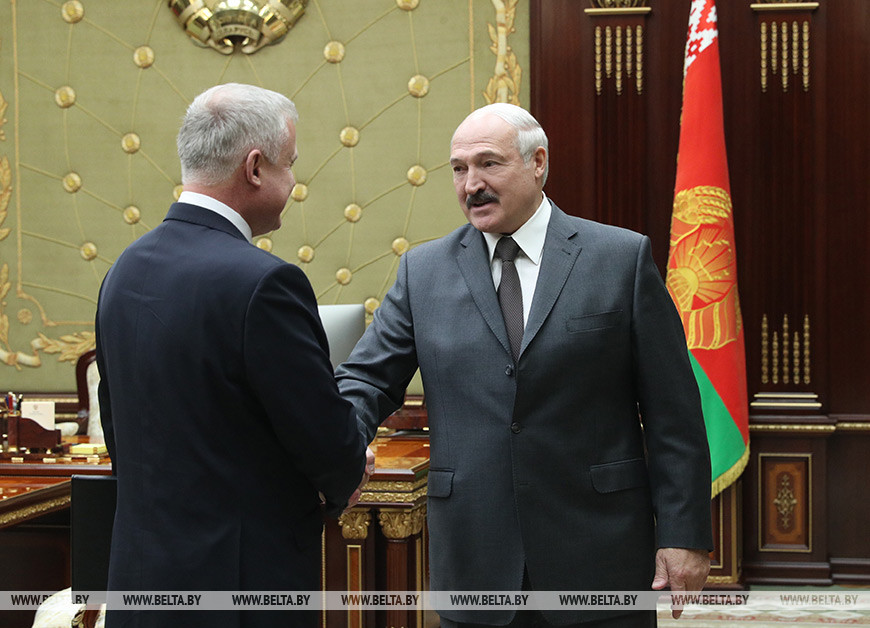 Photo by the Presidential Press and Information Office

The meeting was also attended by Minister of Foreign Affairs of the Republic of Belarus Vladimir Makei and Secretary of State of the Security Council Andrei Ravkov.

At the end of the meeting, the CSTO Secretary General gave comments to the media.

On the initiative of Belarus, decisions were made on the legal registration of the status of a partner of the organization, as well as an observer at the CSTO. "The decision has been made, it has been ratified by almost all CSTO states, Tajikistan remains, nevertheless it is considered to have entered into force," Stanislav Zas said. Now concrete work will be conducted with those states that are considered as potential candidates for obtaining these statuses. “It is necessary to determine the countries and build concrete work, form a good-neighbor belt around our military-political bloc,” said Stanislav Zas.

According to him, it is premature to name specific countries, since they are elected and approved by the CSTO Heads of member states. “Certain stages must go through,” said the CSTO Secretary General. “But believe me, there are states and international organizations that would like to receive observer status or CSTO partner.”

Legally, the decision to create partnership institutions and observers in the CSTO was made by the Heads of stats of the Organization at a session of the CSTO Collective Security Council in November 2018. In accordance with it, the status of a CSTO partner can be obtained by a state or an international organization that shares the goals and principles of the CSTO, who wish to establish and develop mutually beneficial cooperation relations with the organization in areas of mutual interest with the adoption of obligations to participate in CSTO practical activities. In turn, the observer at the CSTO is a state or an international organization interested in studying the open regulatory framework, experience and practice of the CSTO without accepting obligations to participate in the organization’s practical activities.

Touching on the topic of international cooperation, Stanislav Zas positively described the relationship with the UN structures. “This is the fight against terrorism, peacekeeping, and other areas of activity,” he added. “We have made serious progress in working with the United Nations to involve our peacekeeping potential and its inclusion in UN missions.”

“We have good relations with the OSCE (a meeting with the OSCE Secretary General is scheduled for May),” continued Stanislav Zas. “Relations with the CIS and the SCO are partnership, serious. Relations with NATO have not developed yet, although we indicate and consider the corresponding signals, readiness establishing dialogue with this military-political organization is important. "

The CSTO Secretary General drew attention to the awareness of the head of the Belarusian state about the processes that are under way in the CSTO. "Belarus is very closely involved in the activities of the CSTO, there is support in all steps that are aimed at strengthening this organization, increasing the effectiveness of its work in the interests of all countries," he said

Photo by the Presidential Press and Information Office