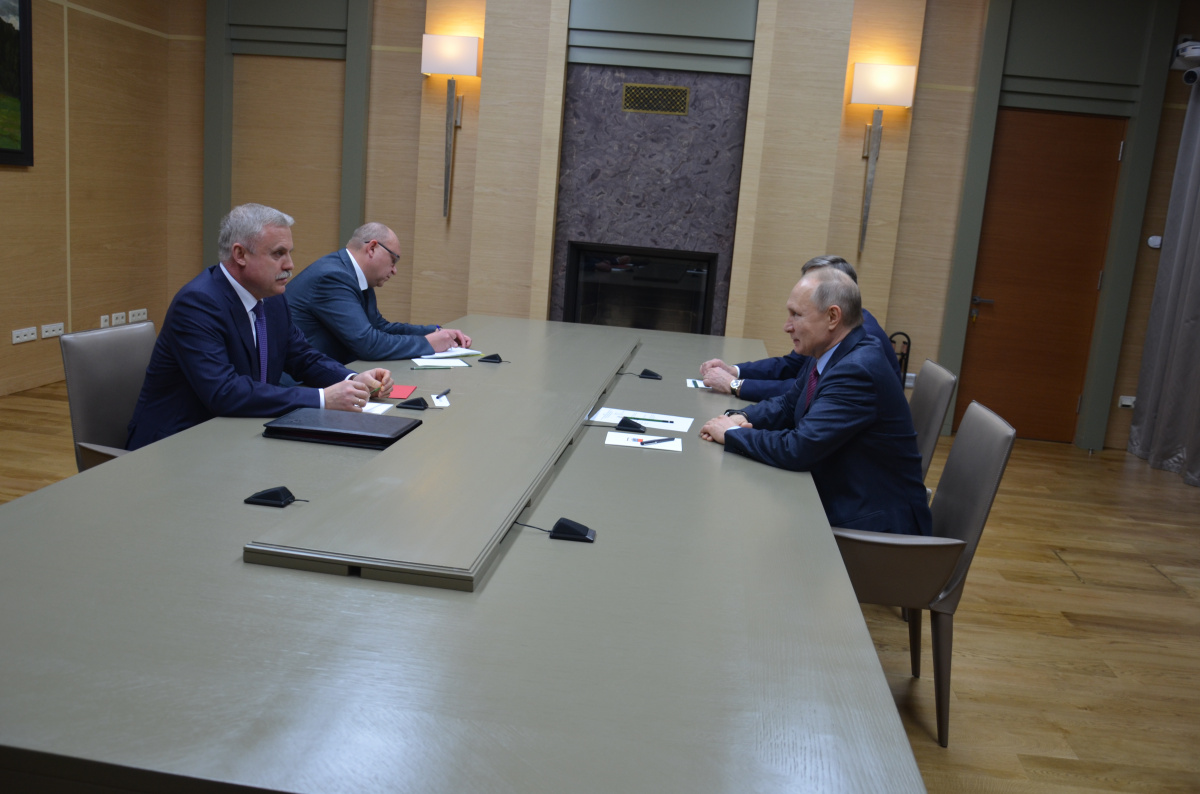 On March 11, this year, the Chairman of the CSTO Collective Security Council, President of the Russian Federation Vladimir Putin met with the Secretary General of the Collective Security Treaty Organization Stanislav Zas in the suburban residence of Novo-Ogaryovo in the Moscow Region. The meeting was also attended by Assistant to the President of Russia Yuri Ushakov.

Vladimir Putin greeted the CSTO Secretary General: “I am glad to see you, Stanislav Vasilievich, in your new position. You are man of experience. I hope that you use all your experience to ensure that the CSTO Secretariat works rhythmically, so that all plans that were built back in the previous time, were being realized, "said the President of Russia, opening the meeting.

He noted that the CSTO had many plans and was waintng for the festive events dedicated to the 75th anniversary of Victory in the Great Patriotic War. “Within the framework of the CSTO, certain measures are also outlined. I very much hope that all this will be fulfilled, "said the President of Russia. In 2020, the Russian Federation chairs the CSTO.

Stanislav Zas thanked Vladimir Putin for the opportunity to meet. He emphasized that such a dialogue was very important in order to build up the fruitful work of both the CSTO Secretariat and all bodies of the Organization.

The Secretary General informed the President of Russia that CSTO member states had planned events to celebrate the 75th anniversary of the Victory, which would help to effectively convey to the general public truthful information about the contribution of the peoples of the countries included in the Collective Security Treaty Organization to the Great Victory.

“We are considering the possibility of adopting the corresponding Statement of the Ministers of Foreign Affairs of the CSTO member states in order to further distribute this document within the UN and OSCE. All this is designed to confront to distort history, ”said Stanislav Zas.

The CSTO Secretary General said that the CSTO began to implement the Action Plan recently signed by the Chairman of the CSTO CSC to implement the decisions of the November (2019) CSC session and the priorities proposed by the Russian Federation. “We have an understanding of what needs to be done in the future and now. The working bodies and the CSTO Secretariat are fully staffed and work clearly,” said Stanislav Zas.

Stanislav Zas noted that the CSTO was actively cooperating with the relevant UN structures in the application of the CSTO peacekeeping potential in the interests of the United Nations. “At present, issues are being worked out with relevant UN committees on the practical inclusion of CSTO Peacekeeping Forces units in UN peacekeeping operations,” the CSTO Secretary General said. He added that there was also a need to establish a Basic Center for the Training of Peacekeeping Units according to UN standards.

S. Zas emphasized in a conversation with V. Putin that the CSTO attaches great importance to the development of political cooperation in the format of the CSTO Parliamentary Assembly. “At present, the CSTO parliamentary assembly partners in inter-parliamentary relations are Serbia and Afghanistan, and it is advisable to continue work in the direction of expanding such relations,” he said.

Concerning the military sphere, the CSTO Secretary General informed the Russian leader that a plan for the development of military cooperation of the CSTO member states for 2021-2025 has already been prepared and submitted to the statutory bodies of the Organization. “In 2020, it was planned to conduct seven joint trainings with the CSTO Troops (Collective Forces). The most important of these are the command-and-staff training with the Collective Rapid Reaction Force "Interaction-2020", the training with reconnaissance forces and means "Search-2020", with the Peacekeeping Force "Indestructible Brotherhood-2020" and the special forces training "Cobalt-2020 "- said Stanislav Zas.

Reporting on the activities of the CSTO in the field of countering challenges and threats, Stanislav Zas informed Vladimir Putin about the development, together with the Ministry of Internal Affairs of Russia, of a draft Anti-Drug Strategy of the CSTO member states for 2021-2025, which was planned to be sent for domestic coordination, and on the progress of a complex of anti-terrorism operational preventive measures under the code name "Mercenary".

The CSTO Secretary General also informed the President of Russia about the ongoing work to improve the CSTO crisis response system and preparations for the upcoming meetings of the Organization’s statutory bodies in 2020.