On November 23, in Yerevan, at a joint meeting of the CFM, the CMD, and the CSSC, important political statements on international security, the fight against terrorism, and condemnation of attempts to glorify Nazism were adopted 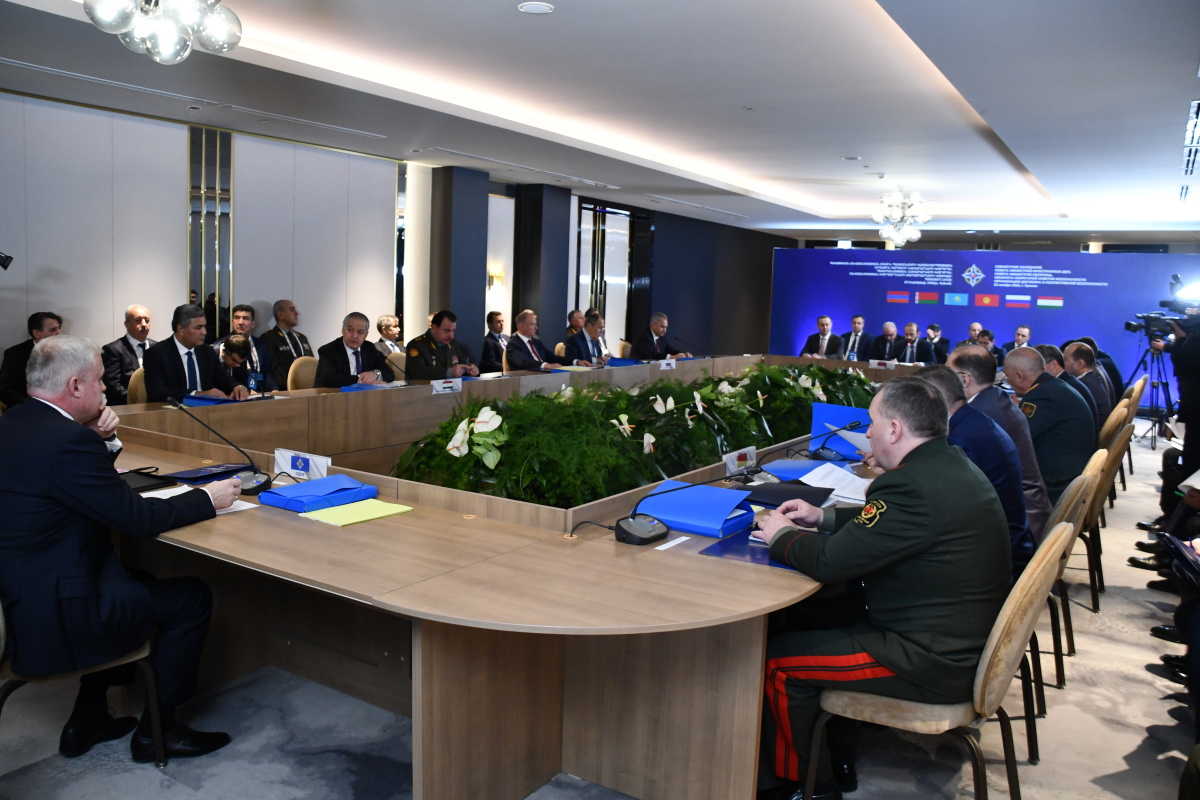 On November 23, this year, Yerevan hosted a regular meeting of the Council of Foreign Ministers, the Council of Defense Ministers and the Committee of Secretaries of Security Councils of the Collective Security Treaty Organization, chaired by the Armenian side. Heads of foreign ministries, defense ministries, secretaries of security councils of the CSTO member states, the CSTO Secretary General Stanislav Zas and the Chief of the CSTO Joint Staff Colonel General Anatoly Sidorov participated in the meeting.

The meeting was held in a plenary session, during which participants discussed the military and political situation in regions of collective security and its impact on the security of the member states. The CSTO Secretary General Stanislav Zas presented information on the situation in the CSTO's area of responsibility.

A number of important political statements were adopted as a result of the joint meeting of the CFM, the CMD, and the CSSC:

- STATEMENT by the Ministers for Foreign Affairs of the CSTO member states on strengthening the international and regional security architecture and arms control, disarmament and non-proliferation. It expresses deep concern at the progressive degradation of the foundations of the international and regional security architecture. It expresses extreme concern at the termination of the Anti-Ballistic Missile Treaty and the Treaty on the Elimination of Intermediate-Range and Shorter-Range Missiles, and calls for equitable and mutually respectful dialogue aimed at reducing confrontation, restoring trust, strengthening existing arms control mechanisms and creating new ones.

- STATEMENT by the Ministers for Foreign Affairs of the Collective Security Treaty Organization member states on combating the financing of terrorist activities. It notes that one of the most effective ways of combating international terrorism is to reliably block the channels of financing terrorist organizations. The necessity of further development of cooperation of the CSTO with other regional structures and international organizations, in particular with the UN Counter-Terrorism Office, the UN Office on Drugs and Crime, within the RATS SCO, the ATC CIS and the EAG is emphasized. The importance of conducting a set of preventive measures under the code name "Mercenary" to shut down channels of recruitment and entry/exit of citizens of the member states to participate in terrorist activities and to neutralize their resource base is noted .

- STATEMENT by the Ministers for Foreign Affairs of the CSTO member states on Cooperation in Combating the Global Drug Threat. It states that the problem of illicit drug trafficking continues to pose a serious threat to global and regional security. On this basis, it stresses the need for states to strictly comply with the Single Convention on Narcotic Drugs, the Convention on Psychotropic Substances and the UN Convention against Illicit Traffic in Narcotic Drugs and Psychotropic Substances, which are the cornerstones of the international system of drug control. The CSTO member states are categorically against revising and weakening the existing international drug control system, as well as legalizing the consumption of any narcotic drugs for non-medical purposes. The Statement notes the importance of implementing comprehensive measures to counter the drug threat emanating from the territory of Afghanistan and supports the continuation of the Regional anti-drug operation "Channel" on a regular basis.

-JOINT STATEMENT by the Ministers for Foreign Affairs of the CSTO member states on enhancing cooperation in the field of international information security. The document expresses concern about the growing threats associated with the use of information and communication technologies (ICT) for purposes incompatible with the objectives of ensuring international peace, security and strategic stability, which can damage the national and collective security of the CSTO member states. The destructive impact using information technologies, including those of third countries and private companies to interfere in the internal affairs of the CSTO member states, is unacceptable the use of ICTs for propaganda and incitement of hatred against ethnic and religious groups is unacceptable. Foreign Ministers call on the international community to refrain from the misuse of ICTs to damage information resources and critical infrastructure of states, and advocate ensuring international information security based on the UN Charter and universally recognized norms and principles of international law.

The foreign ministers state, чthat by infringing on the rights of the Russian delegation, the Polish Chairmanship-in-Office has failed to fulfill its obligations to the OSCE, currently the most representative pan-European organization for security and cooperation. Such steps are detrimental to the work of the OSCE. Foreign Ministers call on the OSCE Chairmanship-in-Office to ensure equal and inclusive representation of all OSCE participating states without exception, and on future Chairmanships of OSCE institutions and structures to approach their role constructively, to ensure that their mandates and practices of participation of all members of the Organization are respected in order to achieve the goals of dialogue and cooperation for the benefit of all OSCE participating states.

A STATEMENT by the Secretaries of the Security Councils of the CSTO member states condemning attempts to glorify Nazism, neo-Nazism, extremism, chauvinism and all forms of xenophobia has been adopted. It strongly condemns the actions to rewrite history, distort and revise the outcome of the Second World War and expresses concern and dismay at the growing number of cases of desecration of the memory of those who liberated European countries from Nazi aggression and occupation during the Second World War at the cost of enormous sacrifice. The Secretaries of the Security Councils consider acts of vandalism against the memorials and monuments erected in their honor to be unacceptable, as well as the transformation of such actions into State policy to serve political interests.

Also, the Committee of Secretaries of Security Councils signed a very important decision to approve the composition of the Coordinating Council of authorized bodies of the Collective Security Treaty Organization member states on biological security.

The CMD and the CSSC have adopted a Decision to grant the status of a base organization of the CSTO member states on demining to the International Mine Action Center of the Armed Forces of the Russian Federation for the training of relevant specialists.

The next regular meetings of the CFM, the CMD and the CSSC will be held in the second quarter of 2023 in Minsk.