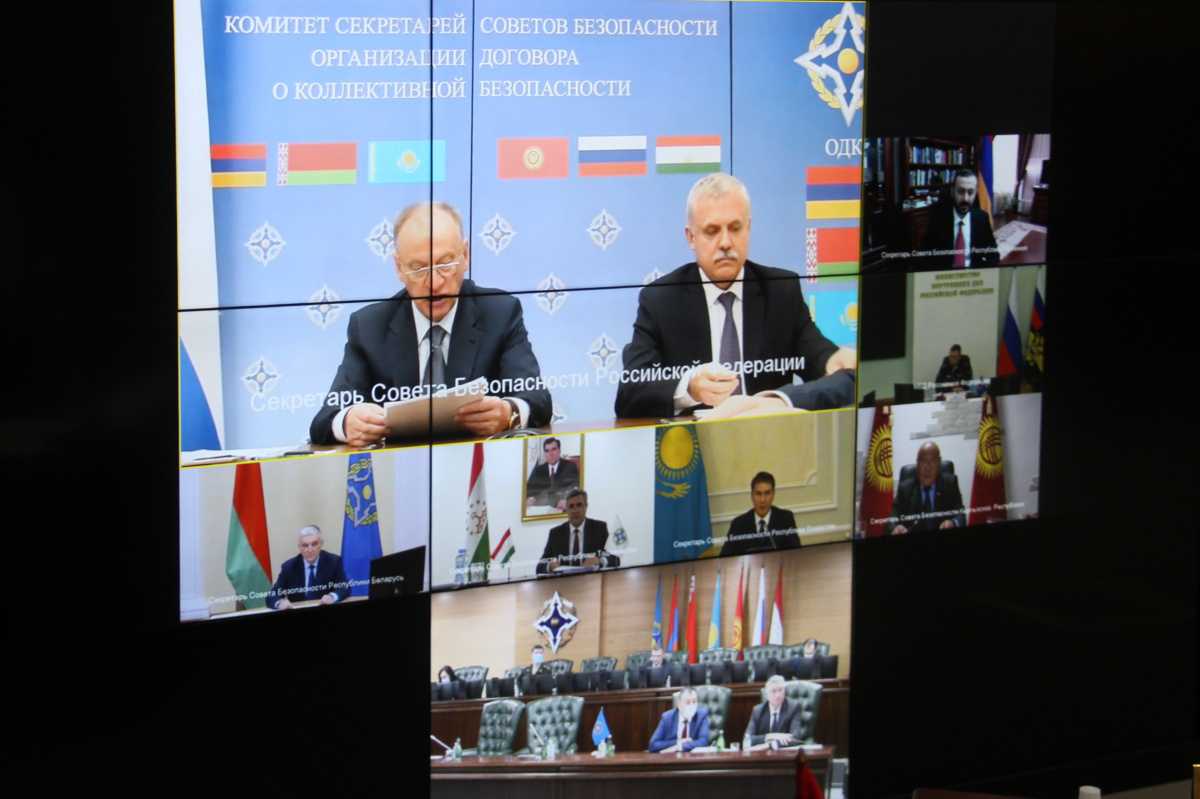 The Chairman of the CSTO CSSC, the Secretary of the Russian Security Council, opening the meeting said that one of the fraught challenges was the ongoing COVID-19 pandemic. “The rapid spread of the coronavirus has changed the way of life almost all over the world. The global political and economic system is being tested for stability. At the same time, we can already say with confidence that our states are coping with this difficult period with dignity,” he said.

Nikolai Patrushev said that in order to overcome the consequences of the pandemic, it was important to exchange relevant information, provide the necessary assistance to each other, including by supplying tests, medicines, personal protective equipment, developing and testing vaccines, as well as consulting on providing medical assistance to citizens of the CSTO member states.

“We will have to comprehensively analyze the consequences of the pandemic, develop collective approaches to interaction within the CSTO in the field of biological security,” the Secretary of the Security Council of the Russian Federation stressed.

The CSTO Secretary General, assessing the military-political situation in the world, said that it remained difficult, and the level of its tension, including in the area of ​​responsibility of the Organization and close proximity to it, had significantly increased over the past year. “Today the need for consolidation of international efforts to overcome confrontation and reduce existing threats is becoming more and more obvious. This is especially important in conditions when the main geopolitical agreements are being dismantled, which have ensured the balance of forces and stability in the world for many years,” Stanislav Zas said.

In the course of the meeting, the CSSC members discussed in detail the challenges and threats to the security of the CSTO member states in the East European, Caucasian and Central Asian regions of collective security.

Following the meeting, the Statement by the Secretaries of the Security Councils of the member states of the Collective Security Treaty Organization on strengthening cooperation and coordinating efforts to combat international terrorism, the spread of terrorist and related extremist ideology was adopted. In the document, the secretaries of the Security Councils draw the attention of the world community to the need to unite efforts in countering terrorism within the framework of a broad international anti-terrorist coalition based on fundamental norms and principles of international law, on the basis of strict adherence to the UN Charter and the implementation of relevant UN Security Council resolutions.

Summing up the results of the meeting, Chairman of the CSTO CSSC Nikolai Patrushev said that the secretaries of the Security Councils spoke in favor of expanding cooperation to prevent the infiltration of foreign terrorist fighters into the territory of the CSTO states. “To this end, we have developed additional measures aimed at increasing the efficiency of interaction between the competent authorities in the anti-terrorist sector,” the Secretary of the Russian Security Council noted.

He emphasized the need for rehabilitation, reintegration and resocialization of citizens who have become victims of terrorist ideology. In the course of the meeting, the CSSC announced its readiness for further constructive cooperation in the fight against terrorism with international organizations, as well as other states on a bilateral and multilateral basis.

According to Nikolai Patrushev, the secretaries of Security Councils paid special attention to information security issues. “We agreed to continue the practice of conducting military trainings, in the course of which new forms and methods of using the Collective Forces will be tested. We stated that the created collective forces today have sufficient potential to solve the tasks assigned to them. At the same time, plans were discussed for their further equipping with modern weapons and military equipment, control and communication systems. We analyzed the prospects of the CSTO peacekeeping activities with an emphasis on the possibility of the CSTO forces participating in peacekeeping operations under the auspices of the UN,” N. Patrushev said.

He expressed the opinion that during the Russian presidency of the CSTO, it was possible to achieve the tasks set by the heads of the CSTO member states for the current year, despite the difficulties associated with the difficult epidemiological situation, as well as the degradation of the military-political situation in the world and bordering with the CSTO area of responsibility regions.

At the end of the meeting, a protocol decision was made to hold the next meeting of the CSTO Committee of Secretaries of Security Councils in the first half of 2021 in the city of Dushanbe.