In Dushanbe, the CSTO Secretary General Stanislav Zas addressed a meeting of the Parliamentary Assembly Council of the Collective Security Treaty Organization 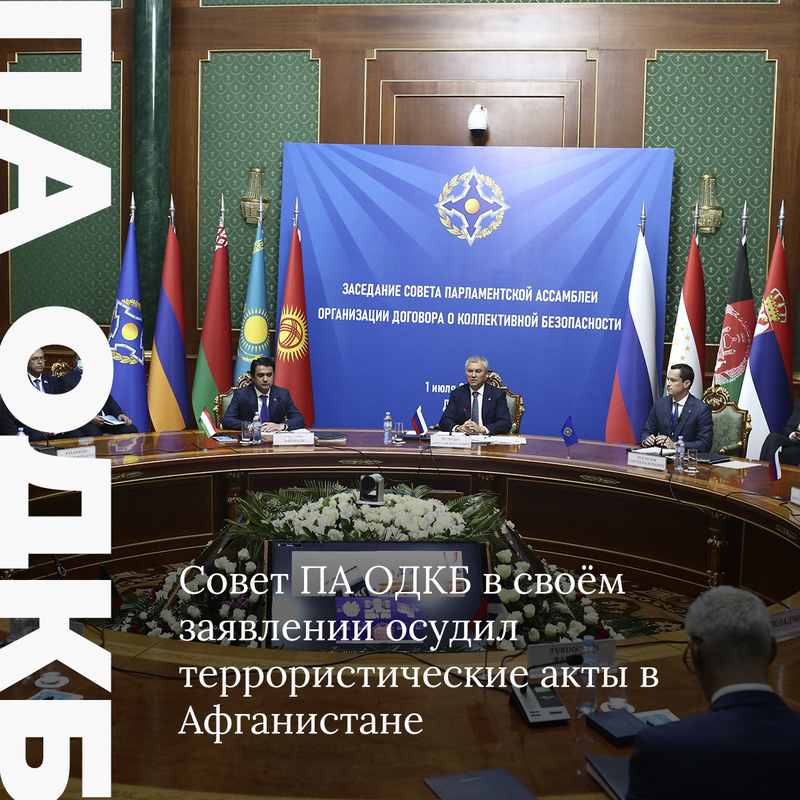 On July 1, this year, in Dushanbe, the capital of the Republic of Tajikistan, a meeting of the Council of the CSTO Parliamentary Assembly was held in person. The event was chaired by the Chairman of the CSTO PA, Chairman of the State Duma of the Russian Federation Vyacheslav Volodin.

The CSTO Secretary General Stanislav Zas participated in the CSTO PA Council meeting and made a speech. In his report dedicated to the results of the December (2020) session of the Collective Security Council of the Collective Security Treaty Organization, the situation in the organization's area of responsibility and the ratification of international treaties concluded within the CSTO framework, he noted that the parliamentary component was one of the most important activities of the organization and the importance of this work, taking into account the current realities was increasing year by year.

The CSTO Secretary General reported that in the course of the CSC meeting a Declaration was adopted expressing concern about the degradation of security mechanisms in the world and the escalation of tensions, including in the Eurasian space. "It was stressed that the CSTO would increase its participation in global efforts to ensure peace and security, consistently advocating the settlement of international and regional conflicts, mainly by peaceful political and diplomatic means within the framework of internationally recognized negotiation formats," Stanislav Zas said.

He also said that the heads of CSTO member States approved a Statement on Building a Just and Sustainable World Order, in which they confirmed their readiness to work together to build a free, democratic, common and indivisible Euro-Atlantic and Eurasian security community stretching from Vancouver to Vladivostok.

"In general, all decisions adopted at the December meeting of the CSTO Collective Security Council gave a new impetus to the organization's activities in all its major areas," the CSTO Secretary General said.

At the same time Stanislav Zas drew parliamentarians' attention to the fact that the current international situation gave no reason to be optimistic about positive changes in the global security.

"It would seem that the pandemic and the need to fight it should have consolidated the world community and smoothed out the existing contradictions. However, what we see! There is increased pressure on countries seeking to pursue an independent policy. For this purpose, an increase in military presence and demonstration of military activity near their borders are actively used, the tools of "hybrid wars" and the technology of "color revolutions" are widely used. The West has launched a large-scale "disinformation" campaign with the use of "fake stuff”. As a result, the situation along virtually the entire perimeter of the borders of CSTO member States remains tense," the Secretary General of the Organization noted.

According to him, the processes taking place in Afghanistan have a significant impact on the situation in the CSTO Central Asian region of collective security. The CSTO attaches great importance to the monitoring of this issue. The CSTO Working Group on Afghanistan under the CSTO CFM is dealing with this issue.

"According to our assessment, the threats of activation of international terrorist and religious extremist organizations on the territory of Afghanistan and, consequently, the probability of spread of terrorism and criminal drug trafficking have not decreased. The likelihood of a quick resolution of the situation in the territory of this country and, as a consequence, in the Afghan border region, remains low. One of the main questions is in what direction the situation will develop after the withdrawal of the American and NATO contingents from Afghanistan, whether official Kabul and the Taliban will be able to reach agreements, ensuring peace and stability in the country and prevent strengthening of ISIS and other extremist groups," Stanislav Zas said in his report.

He stressed that in the current circumstances, the work on the preparation of the Draft CSTO Special Interstate Policy for strengthening sections of the Tajik-Afghan Border, which is currently underway, acquires particular importance.

The CSTO Secretary General informed the parliamentarians that active work was underway to prepare for the joint military trainings of CSTO member States in 2021 in the framework of operational-strategic training "Combat Brotherhood-2021", most of which will take place in the Republic of Tajikistan.

According to him, countering new challenges and threats continues to be one of the CSTO's priorities. "In accordance with the "Plan of collective actions of the CSTO member States to implement the UN Global Counter-Terrorism Strategy for 2019-2021," work is underway to deepen cooperation among the CSTO member States in the fight against terrorism and extremism. Operations "Mercenary" on counterterrorism, "Channel" on countering drug trafficking, "Illegal" on countering illegal migration, operation PROXY, aimed at combating the use of information and communication technologies for criminal purposes, as well as tactical and special training "Cobalt" also in the Republic of Tajikistan are planned for 2021," the CSTO Secretary General said.

At the same time, the CSTO is exploring new areas of activity. Cooperation of CSTO member States in the field of biosecurity is being developed. Algorithms of work in the field of public diplomacy are being formed.

In conclusion, Stanislav Zas noted that constructive interaction has developed between the CSTO Secretariat and the CSTO Parliamentary Assembly Secretariat. "I would also like to take this opportunity to express my gratitude to the parliamentarians of the CSTO member States for their effective work on the ratification of the CSTO documents - all the documents submitted for ratification have been ratified," the CSTO Secretary General concluded.

The Parliamentary Assembly Council of the Collective Security Treaty Organization, in connection with the deteriorating situation in the immediate vicinity of the southern borders of the CSTO member States:
Expresses concern about the high level of fighting in Afghanistan, especially in its northern provinces, against the backdrop of the drawdown of the foreign military presence, and calls on all Afghan ethnic groups and political forces to create favorable conditions for advancing the peace process and establishing Afghanistan as an independent and neutral state.
Strongly condemns terrorist acts in Afghanistan targeting civilians and stresses that the activities of ISIS and other international terrorist groups are a key component of the unstable situation in the Islamic Republic of Afghanistan.
Expresses concern about the extremely high level of drug production in Afghanistan, which is a major source of income for terrorist groups in the Islamic Republic of Afghanistan and calls on the authorities of the Islamic Republic of Afghanistan, including the Afghan National Assembly, to increase efforts to combat this scourge.
Calls on the international community, including national parliaments and international parliamentary organizations, to increase humanitarian assistance to Afghanistan in order to prevent Afghan refugee flows into neighboring countries.
Expresses its readiness to support through parliamentary diplomacy the Afghan National Assembly to promote the national reconciliation process with a view to ending the war as soon as possible and stabilizing the situation in Afghanistan.
Confirms the readiness to contribute to the improvement and harmonization of the Islamic Republic of Afghanistan legislation in the fight against terrorism
and drug trafficking, drawing on the Assembly's normative experience, including the model laws