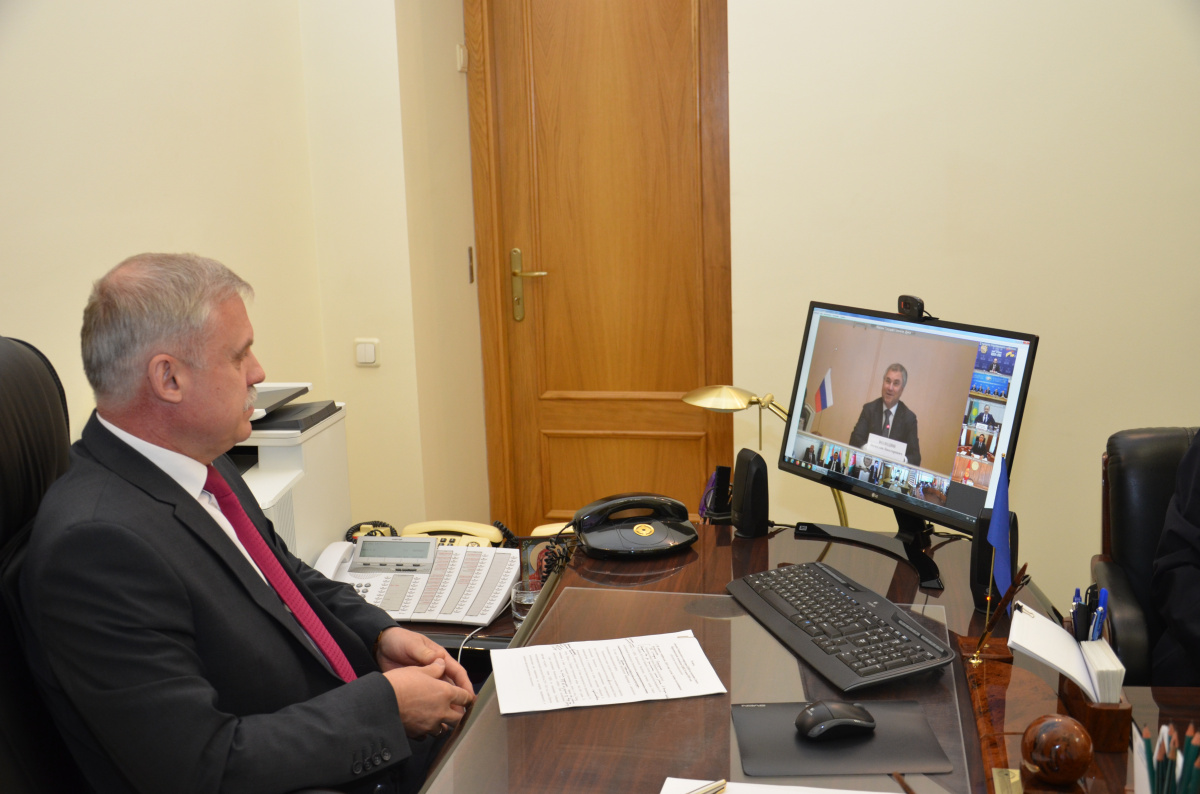 On June 15, 2020, a meeting of the Council of the CSTO Parliamentary Assembly was held in the videoconference mode, where Stanislav Zas, Secretary General of the Collective Security Treaty Organization, took the part. The meeting was chaired by the Speaker of the State Duma of the Russian Federation, Chairman of the CSTO PA Vyacheslav Volodin. 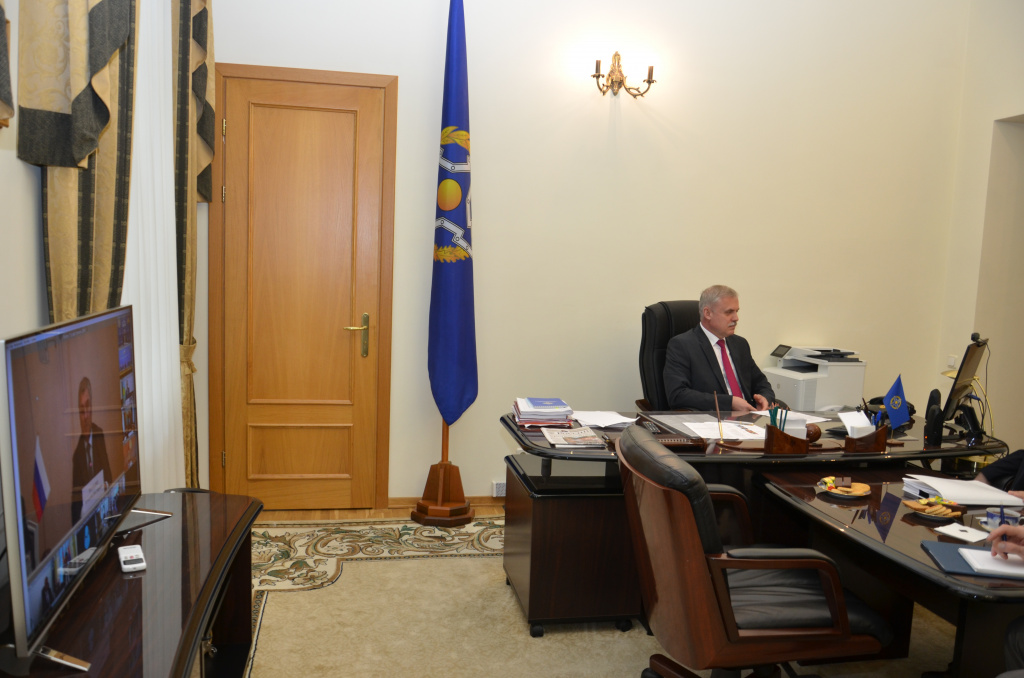 Stanislav Zas informed the CSTO PA Council on the situation in the Organization’s area of ​​responsibility, on measures to counter the challenges and threats to collective security, and on the ratification processes in the CSTO member states of international treaties concluded within the Organization.

According to him, there is an obvious need to consolidate international efforts to overcome the unprecedented challenge of the coronavirus pandemic. However, today the situation in the world is aggravating, and the negative trends that existed before the epidemic came to the fore again.

Stanislav Zas noted that this applied to the dismantling of the international arms control system, to the deployment of a new arms race, and to bringing NATO's military infrastructure closer to the CSTO responsibility zone, as well as to the intentions of placing weapons in outer space. The dynamics of conflicts in the Middle East continued, exacerbated by a new phase of the US-Iranian confrontation. There was a process of escalating around the charges against China of allegedly concealing data on the onset and extent of the disease, as well as the deliberate provocation of a pandemic in the United States and Europe.

In his speech, he drew attention to the fact that the appeal of the UN Secretary General Antonio Guterres to ceasefire in all conflicts amid the coronavirus pandemic was ignored by many states. “This clearly shows the line on the rejection of the central role of the UN in maintaining universal peace and on nullifying the role of its Security Council,” Stanislav Zas said.

The CSTO Secretary General assessed regional security and its impact on the security of the Organization's member states.

According to him, today threats to stability are growing in the region adjacent to the Central Asian region of collective security from the south. “Along with the positive signals from Afghanistan on the achievement of political agreements between the two leaders of the country and the positive dynamics of the intra-Afghan dialogue, various terrorist and extremist groups continue to strengthen their positions there. And this preserves the immediate threat to the security of the CSTO member states, emanating from the territory of Afghanistan, and leaves an ambiguous prospect for the evolution of the situation with the likely cessation of the US military operation there, ” S. Zas stressed.

At the beginning of this year In the East European direction near the borders of the CSTO member states, the largest-scale military trainings of the North Atlantic Alliance near the borders of the Republic of Belarus and Russia “Defender of Europe 2020” were launched (although due to the pandemic were winded down). “The course on the militarization of the region and the development of military infrastructure continues. Information aggression from some Western countries is intensifying,” the CSTO Secretary General said.

Touching upon the situation in the Caucasus region of collective security, Stanislav Zas said that, despite the ongoing work to resolve the Nagorno-Karabakh conflict, a certain regularity of contacts between the parties, it was premature to talk about progress in this direction. “Obviously, it is necessary to achieve a ceasefire on the contact line of the armed forces of the parties. We must strive to resolve conflict issues by stakeholders through dialogue and mutual compromise,” the CSTO Secretary General said.

Stanislav Zas informed the Council of the CSTO Parliamentary Assembly that this year it was planned to conduct seven joint trainings with the CSTO Troops (Collective Forces), including such important ones as the command and staff training with the Collective Rapid Reaction Forces "Interaction-2020", training with the Peacekeeping Forces " Indestructible Brotherhood-2020 ”and the special forces training “ Cobalt-2020 ”.

“The entire planned set of measures will be implemented to build up the CSTO capabilities in the field of countering challenges and threats, including the development of a draft Anti-Drug Strategy of the CSTO member states for 2021-2025 and the continuation of the ongoing operations “Channel”, “Illegal” and “PROXY”, as well as a complex of anti-terrorist operational and preventive measures under the code name "Mercenary" as well as measures aimed at reducing tensions in the Tajik-Afghan border, " Stanislav Zas said.

Stanislav Zas also drew the attention of the Council of the Parliamentary Assembly to the prospects for the development of the CSTO Observing and Partnering institutions, the decision on the legal registration of which was adopted at the November (2018) session of the CSTO Collective Security Council in Astana.

“The implementation of this decision is aimed at expanding and deepening relations and cooperation with external partners from among international organizations and third countries. In our opinion, those countries and international organizations with which we have already developed practical cooperation can be considered as potential partners and observers,” the CSTO Secretary General said.

The CSTO PA Council considered the draft program of activities of the Parliamentary Assembly for the approximation and harmonization of the national legislation of the CSTO member states for 2021-2025.

The Chairman of the CSTO Parliamentary Assembly, Vyacheslav Volodin, in the course of the Council meeting said that within the framework of the program to harmonize and approximate legislation, 31 of the 43 model acts were adopted. “The work needs to be accelerated in order to submit the remaining 12 model laws for consideration in the autumn session and fulfill the scheduled for the 2016– 2020 years. The adoption of model laws within the framework of the CSTO PA is an effective mechanism for enhancing coordination, which has proved its relevance in the field of combating terrorism, extremism, drug trafficking, and organized crime, ”V. Volodin noted.

He emphasized the importance of implementing the adopted model laws in the national legislation of the CSTO member states. “This creates a single legal field of security,” the speaker of the State Duma of Russia said.