The CSTO Secretary General Stanislav Zas gave an interview at the RT TV channel: "We give priority to political means of influence" 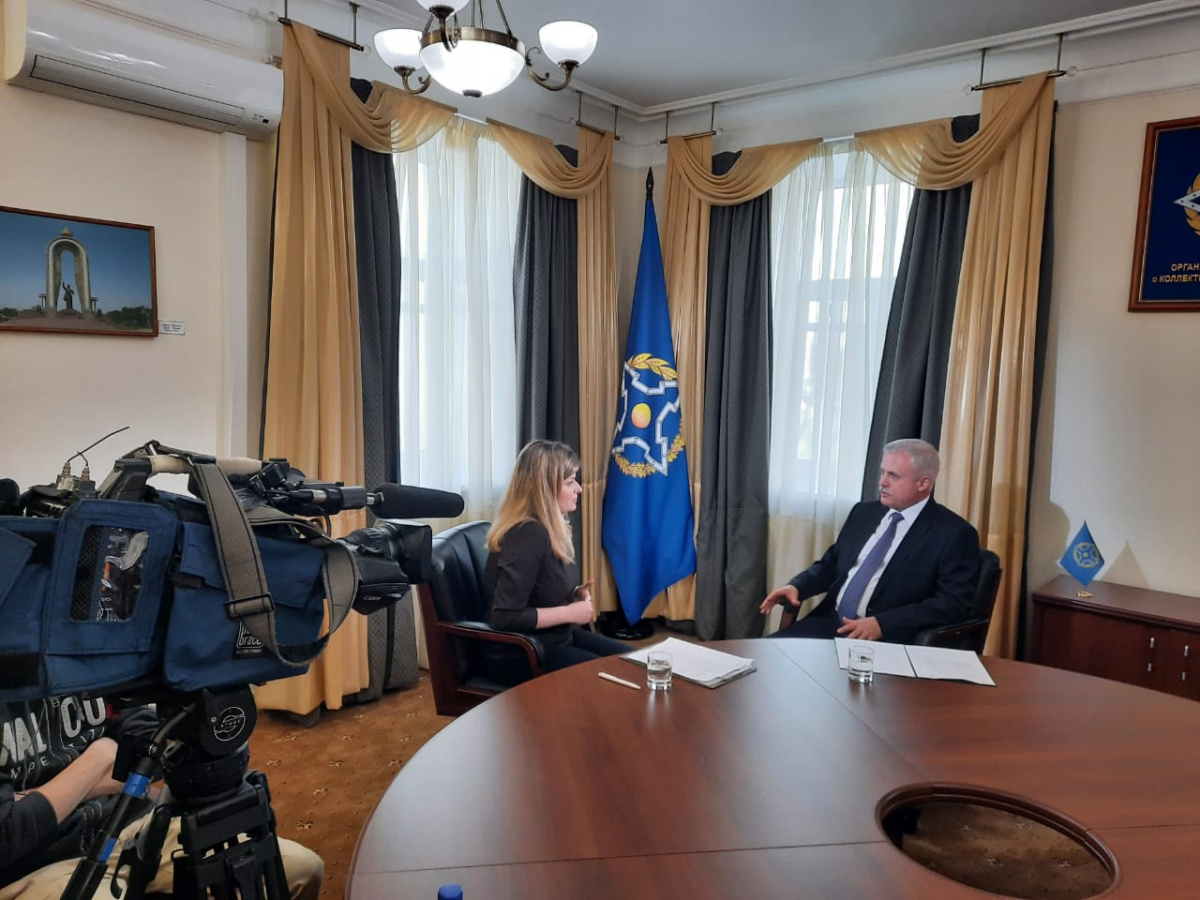 "Strengthening Peace and International Security": the CSTO Secretary General - on the goals and methods of the organization

The main goal of the CSTO is to strengthen peace, international security and protect the sovereignty, independence and territorial integrity of the organization's member states. The CSTO Secretary General Stanislav ZAS stated this in an interview at RT. He also spoke about the organization's approach to the events in the Kyrgyz Republic and the Republic of Belarus, assessed the situation around the Nagorno-Karabakh conflict and noted the importance of contending the truth about the Great Patriotic War.

— Stanislav Vasilyevich, October 7 was the 18th anniversary of the signing of the Charter of the Collective Security Treaty Organization (CSTO). On the same day, a round table was held at the Russian Foreign Ministry within the framework of the CSTO Days, where the results of the organization's activities over these years were summed up, as well as the CSTO development strategy was discussed. Explain what was discussed that day and what the organization is about today. Please,tell us about its purpose, capabilities, role, and place in the international security system.

—  Indeed, a round table was a very interesting and useful event. It was initiated by the Ministry of Foreign Affairs of the Russian Federation. The accent was made not on summing up the results of the activity, it is still a separate topic. In our conversation, we focused on the prospects for the development of the CSTO. And the topic was established —"Strategic landmarks for the CSTO development". Of course, it is necessary to consider development prospects in conjunction with such initial data as the state of the organization, the situation that is now emerging in the area of ​​responsibility, and indeed in the world in general. Therefore, of course, we gave such assessments.

Moreover, the organization is recognized in the international arena, including by the United Nations. The opening of the session of the UN General Assembly took place in September. At the same time, a joint statement by the UN Secretary General and the CSTO Secretary General was published, in which we positively assessed our interaction and stated that we would continue to strengthen this interaction.

What are the goals of the organization? They have not changed over the years. This is the strengthening of peace, international and regional security and the collective protection of the sovereignty, independence and territorial integrity of our states, while giving priority to political means.

Recently I had to read in the information field a reproach against the CSTO. Allegedly, the organization is fictitious, it has not yet fought anywhere, has not shown itself. Just if the organization was at war, this would mean that we did not fulfill our first and main purpose (protecting peace and strengthening security).

— In recent months, as we know, unrest has unfolded on the territory of the CSTO member states, if we talk about the Republic of Belarus and the Kyrgyz Republic. In the zone of the Nagorno-Karabakh conflict, hostilities are underway (the interview was recorded before the ceasefire agreements reached in Moscow. - RT). How does the CSTO react to this?

— As for the conflict in Nagorno-Karabakh, the CSTO was the first international organization to react to the intensification of the conflict. We expressed very serious concern about the aggravation of the situation and called on the parties to an immediate ceasefire and return to the negotiation process under the auspices of the by the co-chairmen of the OSCE Minsk Group. All countries that are members of the CSTO reacted in a similar vein.

As for the events in the Republic of Belarus and the aggravation of the political crisis there, there was a corresponding reaction, we did not keep silent. Of course, we are closely following what is happening in all our countries. And our position is that we consider this a purely internal affair of the Republic of Belarus. The country has every possibility to cope with these problems on its own, without any external interference. Of course, they made it clear, including in the person of the Chairman of the Collective Security Council — now Vladimir Vladimirovich Putin, the President of the Russian Federation — that the CSTO was ready to provide any support the Republic needs.

You know the statement of Russian President Vladimir Putin, who heads the CSTO Collective Security Council this year, that the corresponding reserves have been created and, if necessary, they can be used. It wasn’t necessary.

— And what you can say about the events in the Kyrgyz Republic?

— The approach is the same. The country is going through hard times now. We very much hope that the situation will stabilize. And, by the way, this was also discussed at the round table. Among other things, it sounded that the CSTO, if necessary, would play its mediating role. This experience already exists. Everything, of course, depends on the necessity and will of the Kyrgyz people.

— When are collective security mechanisms activated? When the CSTO is compelled by law to intervene?

— Such cases are well defined in regulatory documents, primarily in the Collective Security Treaty. Two thresholds can be considered. The first is when real threats are created to security, stability, sovereignty, territorial integrity of the state, for any of the CSTO member states. Then it has the right to apply to the CSTO. The mechanism of interstate consultations is being put into operation, including, if necessary, emergency consultations. And the necessary assistance or support is provided to this state at its request. The second is in the event of aggression, military attack. In this case, it is viewed as aggression against all our states, and, again, at the request of the country, it is immediately provided with all kinds of assistance, including military.

— How serious are the fear about the transfer of militants from Syria and Libya to the Nagorno-Karabakh region? And if such threats are confirmed, will a response be developed within the CSTO?

— Now, it is difficult for me to judge the scale and implementation of the transfer of militants to the zone of this conflict. Apparently, it exists, and these militants, mercenaries appear there. Of course, this does not benefit the normalization of relations; it presents a certain challenge. And, not only for the parties involved, but also for others. We proceed from this.

— As part of the CSTO monitoring of events in the post-Soviet space, do you note the growth of so-called national sentiments? What role do you assign to those in the above-mentioned unrest, especially in the Republic of Belarus?

— The growth of national sentiments can be noted in almost all our countries. If, of course, by this we consider the interest in their history, their culture, their identity, the desire to more self-identify as a nation. And, in principle, there is nothing wrong with that.

If this process goes beyond certain limits, beyond those boundaries where is a manifestation of intolerance - cultural, ethnic, religious - this is a different picture. However, I would not point out that the process is now taking such forms.

— National sentiments, as they grow, are looking for their leaders and their symbols. Is it possible to consider here the linking with the concept of Nazism, or, speaking of modern realities, neo-Nazism? And are there any measures that are being taken within the framework of the CSTO? Since the organization includes the countries — the victors of Nazism, the former Soviet Union. Are there any measures being taken to counter the resurrection of such symbols?

— Probably, there are supporters of neo-Nazism in any state, but they are negligible, especially in the Republic of Belarus. In a country absorbed an aversion to fascism, neo-Nazism, and Nazi theory at the genetic level. Therefore, it would be superfluous to say that they play a role in modern politics and public life.

At the same time, of course, the danger of the revival of neo-Nazism and its popularization cannot be underestimated. And certain work is being carried out within the framework of the CSTO. It takes place together with the contending of the truth of the Great Patriotic War and with work to prevent the distortion of history, in the fight against the popularization of Nazism. We have a whole range of measures, because now attempts are being made to revise both the causes of the war and its results.

— In the light of the above-mentioned, and also taking into account the growth of threats in the current modern realities, it seems necessary to develop a common security system. What is such a scheme in the CSTO?

— 18 years have passed since the organization was founded, and it is obvious that the situation is changing. The CSTO system itself is changing, the accents in our work are changing. If initially we built our work with an emphasis on preventing military threats, now threats of a different order are coming to the fore. These are terrorism, drugs, illegal migration. We are currently developing this segment of our security system. And, the emphasis in work is now shifting in this direction. We have created the appropriate forces and are carrying out real permanent operations to prevent these threats.

— And each member country within the organization makes its own contribution?

— Each country makes its own contribution. Of course, states have different capabilities. We must give credit — the Russian Federation plays a very important role in our Organization, given its potential, its capabilities.

— What is the role of joint military trainings in the CSTO in the context of security?

— Trainings with troops are the highest form of military training. These trainings are different every year. This year, the pandemic has made its own allowances. Despite this, we plan to conduct several trainings, including “Interaction-2020”. Unfortunately, we are forced to change the location and format of this training, minimizing the number of troops. Next week we will start peacekeeping trainings in the Republic of Belarus. There are not only tasks for practicing tactical actions, but also some research tasks.

— Is the CSTO considering the possibility of its expansion in the future? Are there certain obstacles along the way?

— We are an open Organization, we are open to countries that are friendly to all of us, who share the norms of our Charter, the Collective Security Treaty. They have the opportunity to join our organization — with the consent, of course, of all the CSTO member states. And I would now put on the agenda not even the expansion of our bloc, but the expansion of the belt of good-neighborliness through the status of an observer and partner of the organization. We have signed agreements, and we expect that this year the process of ratification of these agreements, which legally legitimize these norms — of an observer or a partner of an organization, will be completed. Due to this, we plan to expand the belt of good neighborliness, the belt of our friends.