The CSTO Secretary General Stanislav Zas spoke at a joint meeting of the CIS, the SCO and the CSTO defense ministers on September 4 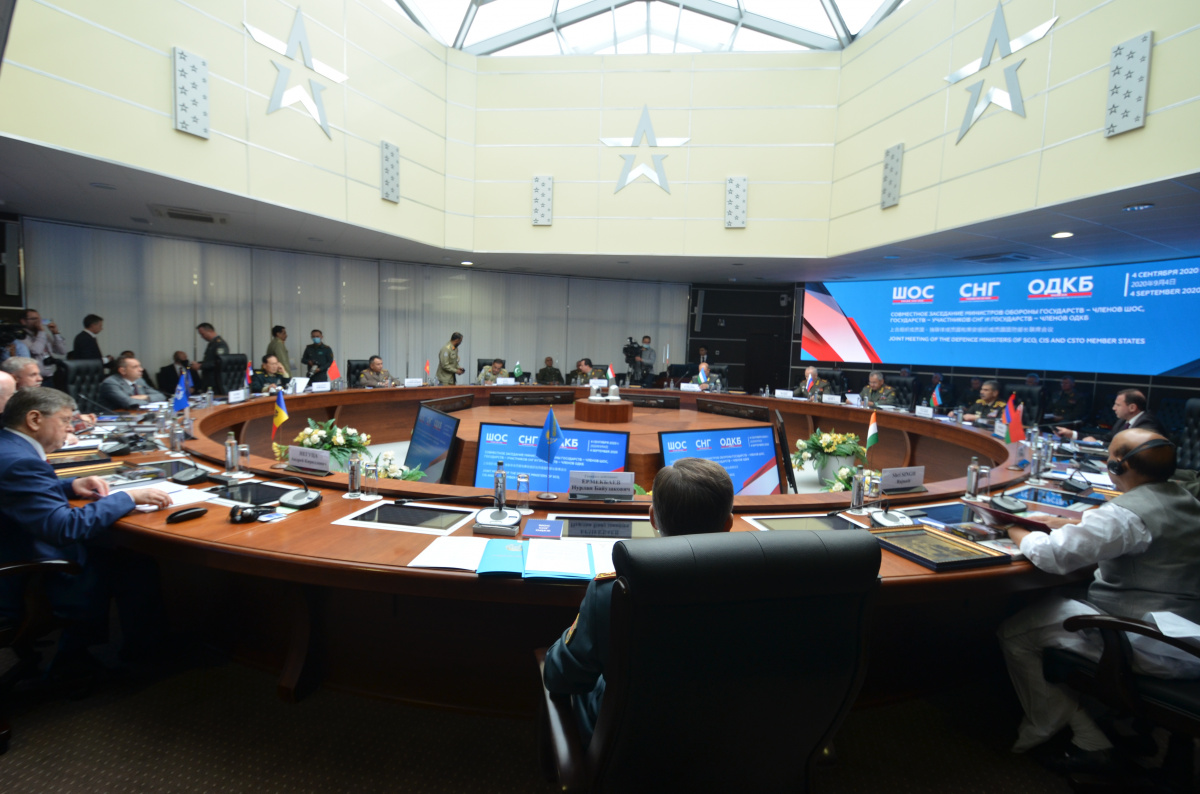 He said that escalation of tension, terrorism, the growth of conflict potential in various regions of the world, the buildup of military activities near the borders of the CSTO zone of responsibility required common efforts to counter.

He stated that a frank exchange of views in the CIS - SCO - CSTO format on global and regional security was a fundamentally new form of interaction between defense departments. “In our opinion, such communication will make it possible to give an objective, multidimensional assessment of the geopolitical and military-strategic situation in the world, and later, possibly, to develop collective measures to counter modern challenges and threats,” Stanislav Zas said. 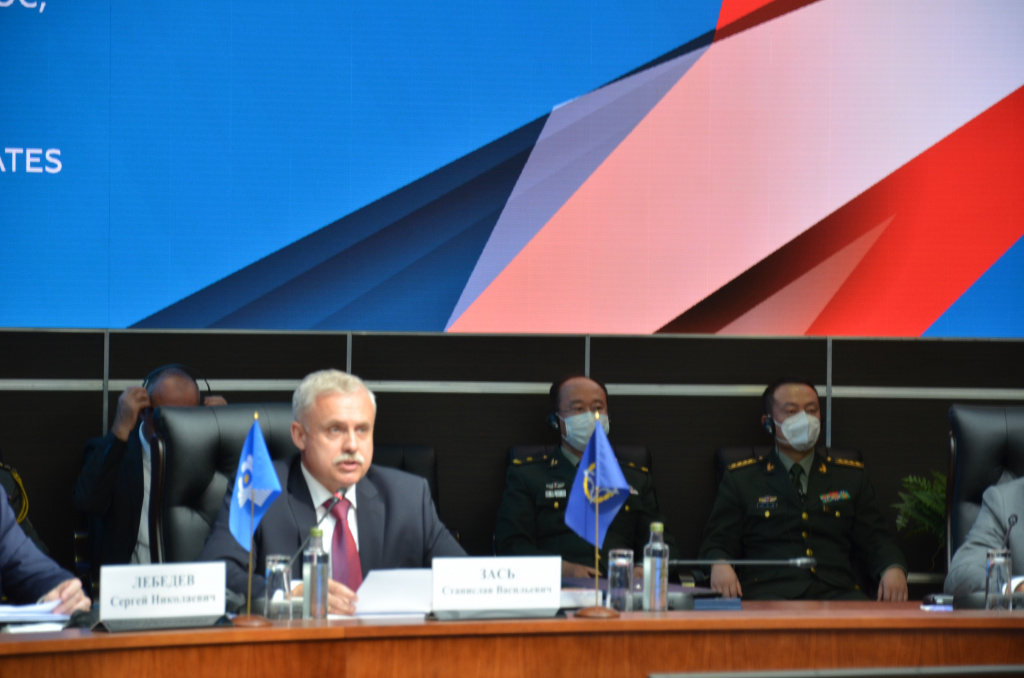 The CSTO Secretary General noted that nowadays the Organization actively cooperated with the CIS and the SCO, considering this cooperation as a means of strengthening security and stability in the Eurasian space. “Its further expansion is one of the priorities of the Organization. I note the positive experience and high level of cooperation between the working and subsidiary bodies of the CSTO, the CIS and the SCO, based on the provisions of the memorandums of interaction and cooperation between them,” S. Zas said.

The CSTO Secretary General said that «escalation of tension, terrorism, the growth of conflict potential in various regions of the world, the buildup of military activities, including near the borders of the CSTO zone of responsibility, require a comprehensive in-depth analysis, balanced review and joint efforts to counter. “Consolidation of efforts to ensure global and regional security is in great demand today,” Stanislav Zas said.

In his opinion, today's joint meeting of defense ministers “marks the progressive development of military cooperation between the defense departments of the CSTO, the CIS and the SCO. “Undoubtedly, this will fructify and will serve to strengthen the role of our states and organizations in ensuring global and regional security,” the CSTO Secretary General said at the end of his speech.

The heads of the defense departments discussed issues of international and regional security, the consolidation of efforts to prevent the threat of the outbreak of wars and armed conflicts, and the further strengthening of military cooperation in modern conditions.

A joint Statement was signed on the occasion of the 75th anniversary of the Great Victory in the Great Patriotic War of 1941-1945 and the World War II. In this Statement the heads of the defense departments noted that “our sacred duty is to preserve and firmly defend the historical truth about those events stored in the memory of our peoples and in archival documents. “We strongly condemn attempts to falsify history, the causes and results of the World War II, as well as the rehabilitation and glorification of Nazi criminals and their accomplices. The decisions of the International Military Tribunal in Nuremberg and the International Military Tribunal for the Far East have no statute of limitations and must be strictly observed,” the joint statement says.

A joint final Communiqué was also adopted, which says that “the heads of the defense ministries proceed from the fact that strict observance of the fundamental principles of the UN Charter and other norms of international law plays a key role in preventing conflicts and resolving urgent global problems. The basis for the settlement of all disputes between states should be peaceful negotiations based on the above principles, as well as equal responsibility for security and non-interference in internal affairs."

Defense ministers noted an increase in the number of hotbeds of tension and conflict zones in the world, including those caused by historical differences, which could lead to an escalation of the situation. "This requires special attention, close coordination and interaction of the world community." - the Communique says.

It also expressed regret over the termination of the Treaty on the Elimination of Intermediate-Range and Shorter-Range Missiles of December 8, 1987, after the withdrawal of the United States, and stressed the importance of maintaining restraint in the missile sector, as well as the extension of the Treaty on Measures to Further Reduce and Limit Strategic Offensive weapons dated April 8, 2010.

The final Communiqué noted the need for a constructive dialogue in order to restore confidence, prevent an arms race and ensure strategic stability and prevent dangerous military activity, as well as consolidate efforts to maintain international peace and security.

In the format of the CSTO Council of Defense Ministers, five documents were signed, including the approved: the draft Plan of consultations of representatives of the CSTO member states on foreign policy, security and defense for the second half of 2020 - the first half of 2021 and the draft Plan for the joint training of governing bodies and formations of assets of the CSTO collective security system for 2021.

The Decision of the CSTO CMD on the creation of a Working Group on electronic warfare, which is responsible for coordinating the interaction of the military command and control bodies of the armed forces of the CSTO member states in this area, was also signed.

The meeting was attended by Colonel-General Anatoly Sidorov, Chief of the CSTO Joint Staff. He noted that the most significant activities of the Plan for the preparation of command and control bodies and formations of assets of collective security include a joint business game of the Secretariat, the CSTO Joint Staff and operational groups of interested ministries and departments of the CSTO member states, special trainings with intelligence assets "Search -2021 "and with Acquisition, Technology, and Logistics units of the Troops (Collective Forces)" Echelon-2021 ", joint trainings with the CSTO CRRF "Interaction-2021" and with the CSTO Peacekeeping Forces" Indestructible Brotherhood-2021". Before the start of the meeting, the Ministers of Defense of the SCO, the CSTO and the CIS countries visited the "Road of Memory" museum complex and the Main Temple of the Russian Armed Forces, which are located near the “Patriot” Park. .

The heads of the military departments used the interactive portal of the"Road of Memory" complex. The defense ministers of the Republic of Armenia, the Republic of Belarus, the Republic of Kazakhstan and the Republic of Uzbekistan found with his help their relatives who participated in the Great Patriotic War. Chinese Defense Minister Wei Fenghe found a relative of Mao Zedong on the portal.

In the church, the Defense Minister Sergei Shoigu told the guests about the various banners depicted there and the greatest Russian soldiers. He drew the attention of the ministers to the icons of the patrons of the branches and arms of the Russian Armed Forces and to the orders depicted on the stained glass windows of the church.

The minister stressed that the slabs of the temple contained the melted metal of fascist weapons. "We are walking at the arms of a defeated enemy," Shoigu said.

Also, the defense ministers who visited the Main Temple of the Russian Federation Armed Forces were told that the domed mosaic image of the Holy Image of the Saviour Not Made by Hands in it was the largest in the world.

The guests also examined the monument “To the Mothers of the Winners”, laid flowers to it, and then planted apple trees in the “Garden of Remembrance”. The "Road of Memory" museum complex was created to perpetuate the memory of all Soviet soldiers. Now it contains 33 million records and photographs about the participants in the Great Patriotic War. 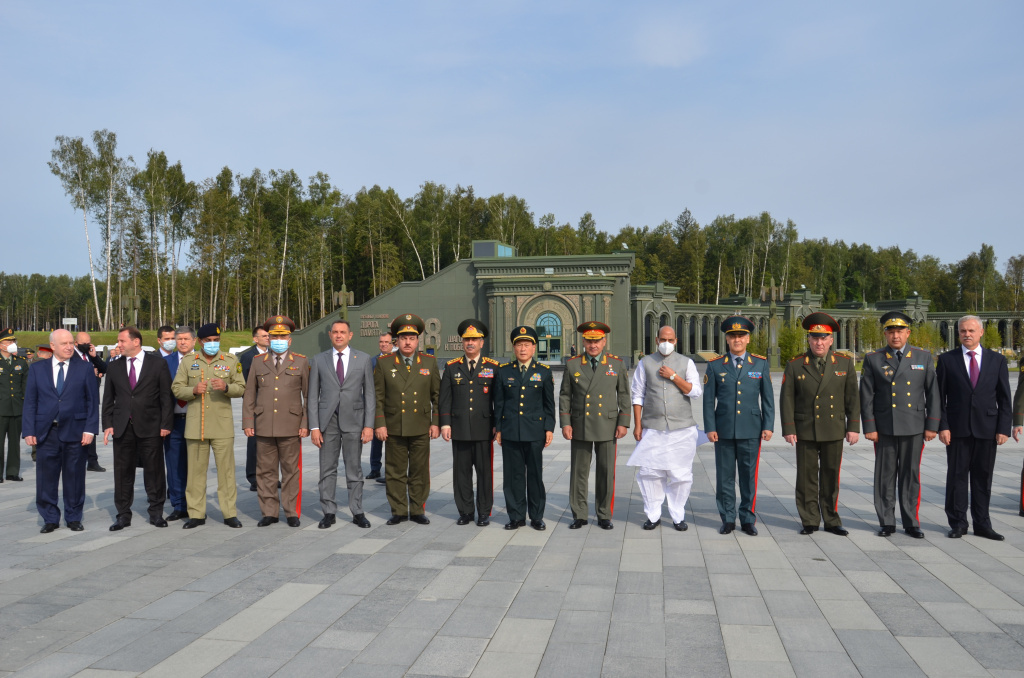