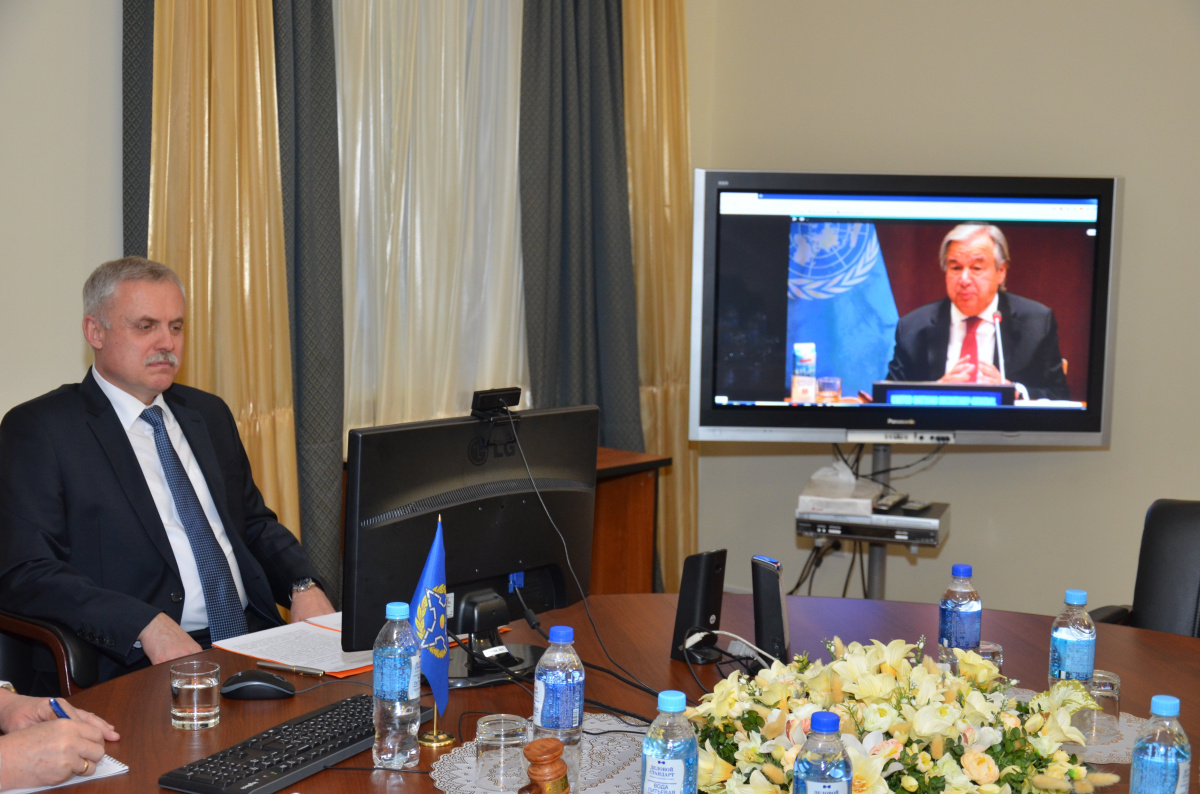 On November 23, 2020, the CSTO Secretary General Stanislav Zas took part in a high-level interactive dialogue with the leaders of regional and other international organizations, which was organized by the United Nations Secretary General Antonio Guterres via videoconferencing. The event was intended to highlight the high place among the priorities of the UN of cooperation with regional organizations in maintaining international peace and security, enshrined in the Chapter VIII of its Charter.

The leaders of the OSCE, the European Union, NATO, the CIS, ASEAN, the SCO, the League of Arab States, the African Union, the Organization of American States, the International Organization for Cooperation of the Francophone Countries of the World, the Commonwealth of Nations and other large associations – more than 20 organizations in total – took part in the dialogue.

The issues brought up by the Secretary-General of the United Nations for discussion included the problems of the impact of the COVID-19 pandemic for peace and security in various regions of the planet, the reaction in the world to the appeal of the UN Secretary General on March 21, this year, towards a global ceasefire; and the need for new initiatives to strengthen coordination and global governance for peace and security.

Antonio Guterres, in his speech, assessed the difficult situation in the world, focusing on the factors that influenced its deterioration as a result of the pandemic. He emphasized the need to ensure a proper response to this challenge by the joint efforts of all states. The UN Secretary General noted that his March call for ceasefire during the pandemic was not met with sufficient support everywhere. He reiterated his call for an immediate ceasefire in the course of conflicts flaring up in various parts of the planet by the end of this year.

In turn, the CSTO Secretary General recalled, "The CSTO has already resolutely stated that the world community needed to focus on substantive dialogue and joint actions to ensure practical measures in the fight against COVID-19 and its consequences."

Stanislav Zas noted that it was necessary to start with the implementation of the initiative put forward by the UN Secretary General on March 21 on an immediate and global ceasefire in all corners of the world in connection with the threat caused by the spread of coronavirus. “The CSTO member states were among the first to support this initiative. We have clearly stated our position in a special joint Statement adopted at the meeting of the Organization's Ministerial Council on May 26, this year. We called on all states of the world, organizations and conflicting parties to listen to the call of the UN Secretary General and to take appropriate steps immediately. This appeal has not lost its relevance today,” the CSTO Secretary General said.

“We are convinced that in the current conditions of the coronavirus pandemic and the measures taken to combat it, it is necessary not to diminish the attention of the world community to the global threat of international terrorism and to continue to build up appropriate national and multilateral efforts to combat this evil. This is confirmed by the events of the most recent times,” Stanislav Zas said. "We call on all members of the world community to put aside political and economic differences and cooperate in accordance with the UN Charter, joining forces in the fight against the global challenge, COVID-19."

He also listed some basic principles of cooperation and mutual assistance, which, according to the CSTO member states, should be guided by: “This is the application of an integrated, scientifically based approach to the development and implementation of measures against a pandemic; collaboration for the development and production of vaccines; provision of technical, including financial, assistance to the most affected countries and peoples; building global capacity to produce medical products and equipment to combat the pandemic; ensuring effective national protection measures, which at the same time minimize negative impact the world economy. "

The CSTO Secretary General noted the intentions of the CSTO member states to continue vigorously promoting a rich agenda of measures aimed at strengthening international peace and security, while assigning the central coordinating role of the UN.

Summing up the results of the dialogue, in the course of which the leaders of almost all major regional organizations spoke, Antonio Guterres noted a high degree of mutual understanding in assessing the need to build up a joint response to the pandemic and strengthen international cooperation in ensuring peace and security. The UN Secretary General expressed his readiness to take into account the proposals of the participants in the virtual dialogue, and, among other things, to use them when fulfilling the mandate given to him by the General Assembly to prepare and report at the end of its 75th session "recommendations for advancing our common agenda and responding to current and future challenges".