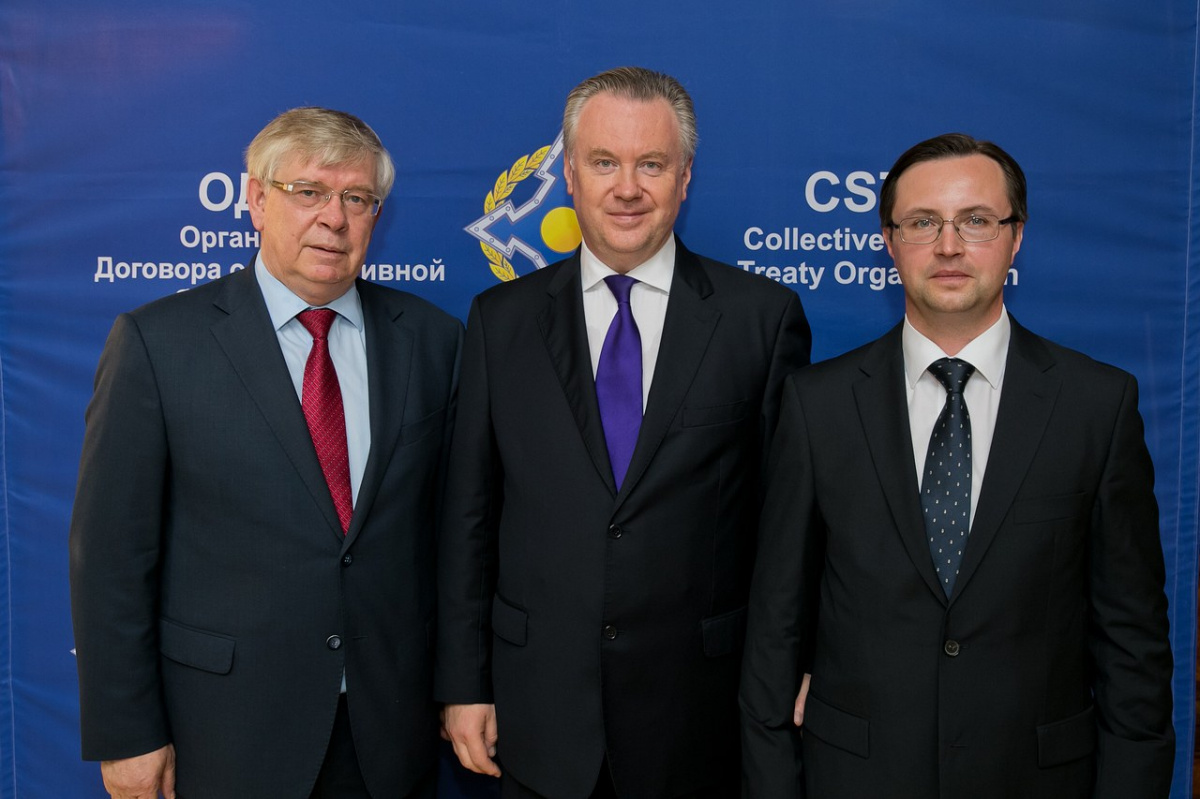 The CSTO Acting Secretary General Valery Semerikov was a keynote speaker at the plenary session of the Forum on Security Cooperation of the Organization for Security and Cooperation in Europe in Vienna on July 17.

Currently chairing the Forum the Republic of Tajikistan has chosen the theme of the meeting: “The CSTO activities in support of the OSCE commitments to ensure the military-political aspects of security”.

In his report, V.Semerikov highlighted the main activities of the Organization to ensure the effective functioning of the collective security system established on the basis of the 2002 Treaty, in accordance with its Charter, Strategy and decisions of the annual sessions of the Collective Security Council.

He stressed that one of the basic principles of the CSTO is priority, which is given to the political means. First of all, this is a large-scale day-to-day work on the close and effective coordination of the foreign policy activities of the member states and the active, well established in a number of areas development of the CSTO relations with the international organizations and primarily with the UN, the OSCE, the SCO, and the CIS.

"Capacity building of the Organization by improving interaction with other international and regional organizations, as well as third countries, is one of the main priorities of the Kyrgyz CSTO Chairmanship," Valery Semerikov emphasized.

The CSTO Acting Secretary General noted that many of the 18 joint statements made in 2018 at the level of the Collective Security Counsil, the CSTO Council of Ministers of Foreign Affairs and the CSTO member states representatives to the UN and the OSCE with a clear statement of the positions of our states on key international issues relate to the politico-military aspects of security.

At the same time he highlighted the Open Appeal of the Ministers of Foreign Affairs of the CSTO member states to the Ministers of Foreign Affairs of the North Atlantic Treaty Organization member states on strengthening mutual trust and cooperation development, adopted by the CSTO Council of Ministers of Foreign Affairs on May 22 this year. In essence, V. Semerikov stressed,“ this is proposal to really implement the fundamental principles of the very “OSCE commitments to ensure the military-political aspects of security”, which are called the theme of today's FSC meeting - key confidence and security-building measures concerning the creation of mechanisms to prevent dangerous military incidents, briefings on the most significant CSTO and NATO trainings and mutual participation as observers in these trainings. ”

Representatives of a number of the OSCE member states participating in the discussion of the report noted the prominent role that the CSTO plays today in security issues in Europe and Eurasia. Many of them expressed support for the repeated in the report adopted by the CSTO Collective Security Counsil in Astana call for a substantive dialogue of all the Euro-Atlantic and Eurasian area countries on joint efforts to create conditions for building a single and indivisible security space free from dividing lines.

The Forum for Security Cooperation (FSC) was established in 1992 by the decision of the Helsinki meeting of the Conference on Security and Cooperation in Europe. It is an independent OSCE body with the authority to discuss military-political issues, including disarmament, arms control, confidence-building measures and take politically binding decisions on them. The Forum meets in Vienna weekly at the level of state representatives.