The delegation of the CSTO Secretariat, headed by the CSTO Deputy Secretary General Valery Semerikov, took part in the events of the UN Online Week of Fight against Terrorism 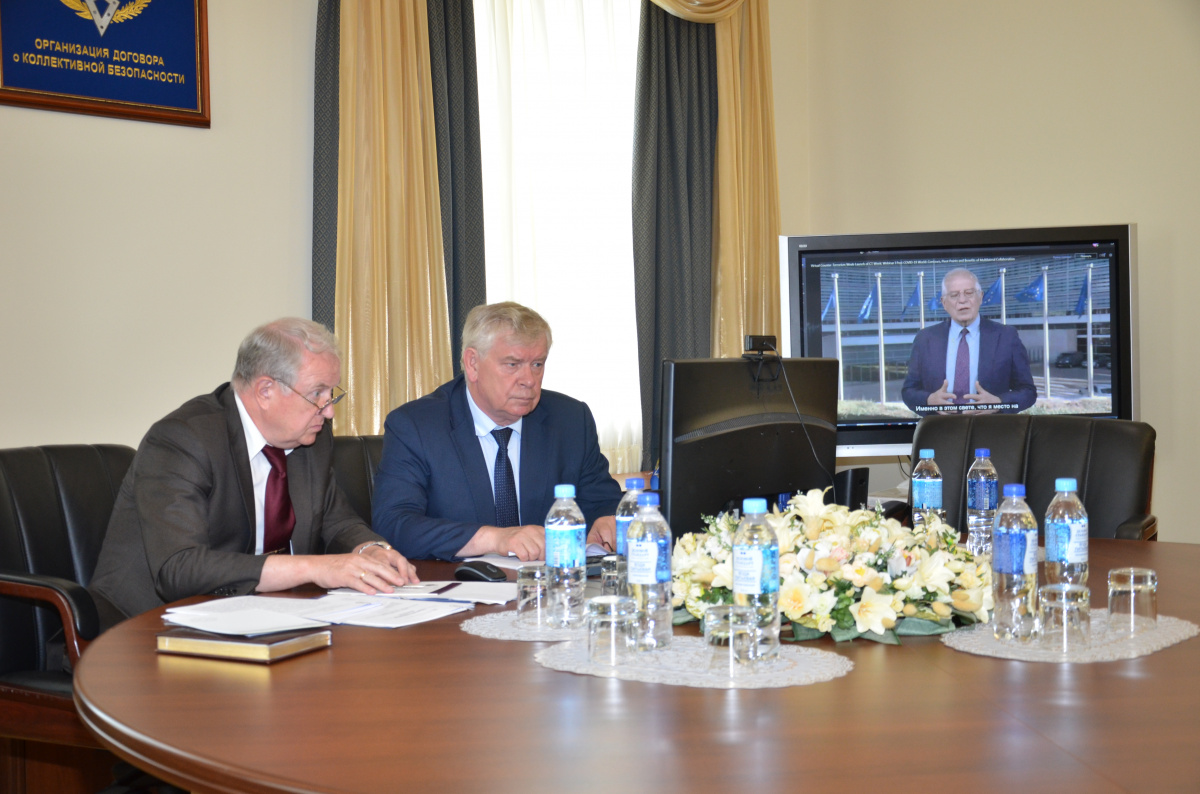 From July 6 to 10, the UN Counter-Terrorism Directorate held a series of video conferences - webinars and interactive discussions - united by a common theme “Strategic and practical tasks of countering terrorism in a global pandemic”. In the situation created by the spread of COVID-19, the leadership of the world organization was forced to postpone indefinitely the planned holding at the UN Headquarters in New York, respectively, on June 30 and July 1-2, 2020, of the World Congress of Victims of Terrorism and the Second UN High Conference level of heads of counterterrorism departments of member states. Together with the Seventh Biennial review of the implementation of the UN Global Counter-Terrorism Strategy, they made up the program of the Second United Nations Week of Fight against Terrorism, scheduled for June 29 - July 2 this year.

Responding to emergency demands, the UN has replaced this impressive, largely unprecedented program with a smaller “Online Week of fight against Terrorism” in the cyberspace. Nevertheless, it has become one of the most representative forums that took place in the Internet these months, due to the relevance of the problems, which caused a wide response from the states of the world, relevant international and regional organizations, NGOs and civil society.

Participants discussed the changes taking place in the world under the influence of the pandemic, especially in the projection of the challenge posed by the international community to international terrorism. They comprehensively examined the growing threats of bioterrorism and the involvement of information and communication technologies by terrorists, the specifics of working in the new environment to prevent, identify and punish terrorists, reintegrate them into society, counter propaganda, recruit new supporters and cross-border movement of militants, and paid special attention to youth and gender factors and the role of the media.

The Secretary-General of the United Nations, Antonio Guterres, addressed the participants with an opening statement “in a live broadcast”. Representatives of the leadership of the OSCE, the European Union, the SCO, ASEAN, the African Union and the Organization of American States, INTERPOL and the Interparliamentary Union addressed the participants. At the invitation of the UNOCT leadership, a delegation of the CSTO Secretariat headed by the Deputy Secretary General of the Organization Valery Semerikov took part in the events of the Online Week.

Key speakers on various topics were many executives of relevant UN structures, including several Deputy Secretaries-General, a large number of Permanent Representatives to the UN of various countries of the world, authoritative experts in the field of countering terrorism, including from Russia.

Almost all the speakers, noting with concern the harmful effects of the pandemic on efforts to counter terrorism, spoke out in favor of intensifying multidimensional measures to combat this global evil and strengthening international anti-terrorism cooperation to a large extent consistent with the conclusions and recommendations contained in the Statement of Foreign Ministers Affairs the Collective Security Treaty Organization Member States on Solidarity and Mutual Assistance in the Fight with coronavirus infection (COVID – 19) dated May 26, 2020.