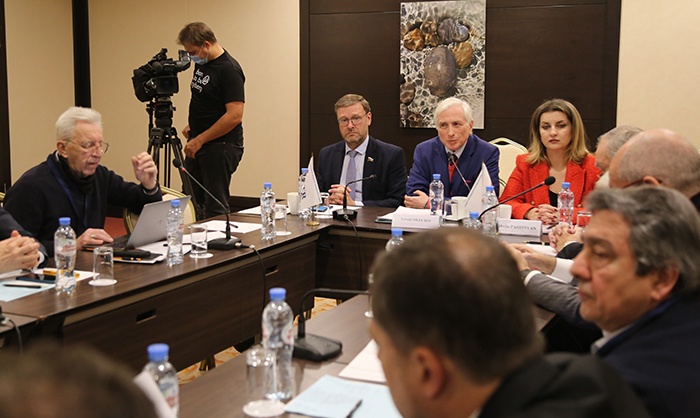 On November 16-17, 2021, in Moscow, the CSTO Secretariat delegation, consisting of experts both in information policy and in information security, took part in the XVI International Conference on Media Participation in Countering Terrorism. The event was organized by the International Academy of Television and Radio (IATR) with the support of the Ministry for Digital Development, Communications and Mass Media of the Russian Federation.

In the greeting to the conference participants the CSTO Secretary General Stanislav Zas emphasized the relevance of the problems discussed:

"The topics discussed at your conferences take on special significance in the context of the rapid spread and development of communication technologies. International terrorism makes extensive use of the opportunities offered by the Internet today. A special place belongs to the digital environment that terrorists and extremists are increasingly using for their anti-human purposes. And the role of the media in informing citizens about the criminal nature of this phenomenon can hardly be overestimated”.

The сonference opened with a speech by Konstantin Kosachev, the Deputy Chairman of the Federation Council of the Federal Assembly of the Russian Federation. He said:

"The topic of media countering terrorism is very dynamic. What was going on in this sphere five years ago is very different from today's realities.

I refreshed my memory of the UN anti-terrorist conventions. First they were devoted to the hijacking of airplanes. Then came the subject of hostages, then bomb terrorism. Later there was talk of nuclear terrorism. But the topic of comprehensive counter-terrorism has not yet emerged. I can see why. There are about 300 different definitions of what terrorism is”.

Experts from different countries spoke about the changing vector of journalism in the fight against terrorism, the increase in crimes in cyberspace and the need to intensify the fight against terrorism in the context of high-tech development. Discussions on the six topics revealed a number of pressing issues that journalists around the world must seek quick answers to.

The сonference was also attended by well-known journalists, representatives of law enforcement agencies, as well as heads of electronic media, scientists, and public figures from Russia, Italy, India, Israel, Armenia, Spain, Morocco, Romania, and other countries. In online and offline formats, they talked about the fact that terrorism had always been able to adapt quickly to changes, and the pandemic had once again demonstrated this. Because of closed borders, terrorists have had fewer opportunities to move from country to country, which has reduced the number of violent attacks against people and bombings. At the same time, the information war on the Internet and cybercrime are gaining momentum. In this situation, the role of the media and mass communications has increased dramatically.

This year's сonference included plenary sessions and roundtables that addressed such important topics as:

•          Combating terrorism in the context of extensive use of artificial intelligence in new media;

•          The modern system of training professional journalists and regulation of the information field as a factor in combating the spread of terrorist ideology;

•          Analytical and investigative journalism in an era of the decline of traditional journalism and the flowering of new means of communication;

•          Cybercrime is the new international battlefield. How to confront the new threat?

At the end of the сonference, the participants adopted a final declaration in which they noted that the vector of journalism in the fight against terrorism in the new virtual media space had changed. Journalists must take into account the growing influence of the "darknet”. It is also important to exchange information about methods and systems of control and regulation of the information field in different countries.

According to the decision of the founders, the IATR headquarters is located in Moscow. In 2004, IATR was registered by the Russian Ministry of Justice as an international organization. Currently, the Academy includes more than 300 television, radio and Internet professionals from 26 countries on four continents.