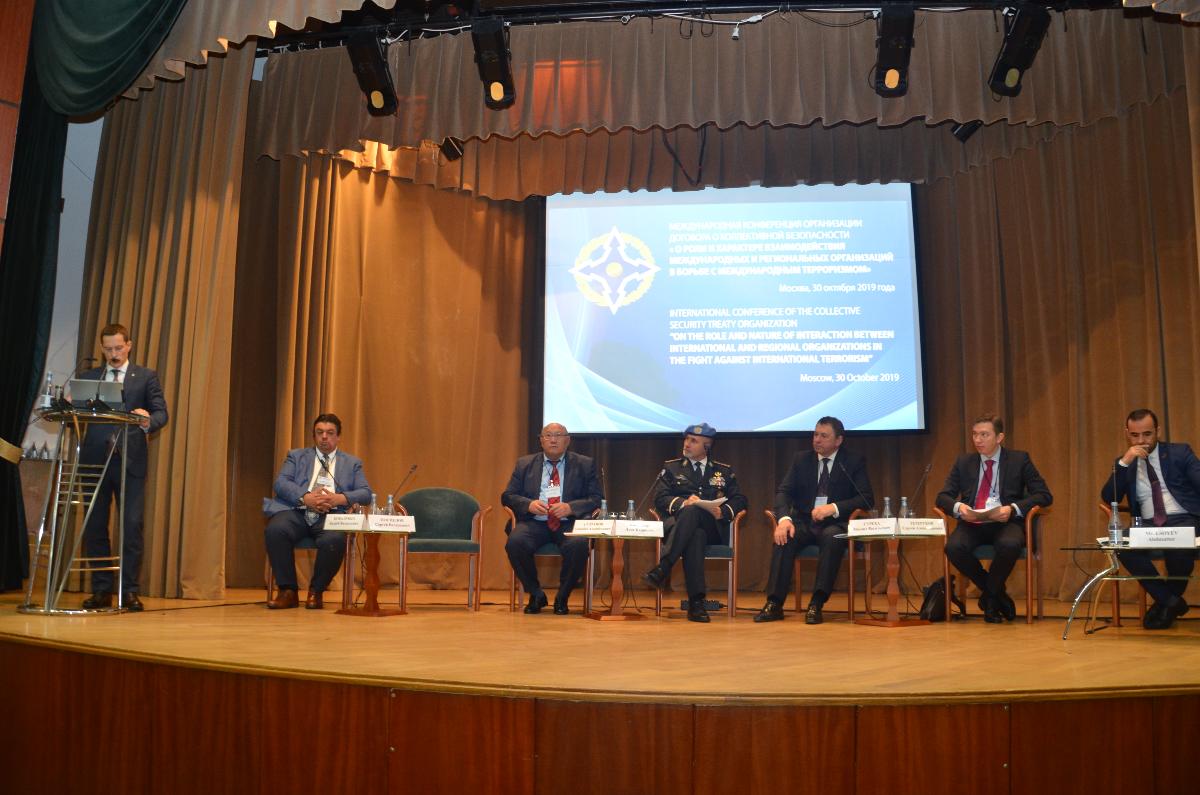 Dear participants of the Conference!

On behalf of the CSTO Parliamentary Assembly, I express gratitude for the willingness to work together on the development of cooperation between international and regional organizations in the fight against terror!

International terrorism was initially considered by the parties to the Collective Security Treaty as one of the main sources of military danger, as well as external and internal challenges and threats to the CSTO member states. Therefore, cooperation with countries and international organizations on the fight against terrorism and ensuring regional security has acquired the status of priority and strategic objective in the Organization.

The relevance of joining forces is particularly acute amid growing threats to the countries of Central Asia, as well as in light of the economic prospects of the Eurasian integration.

In the first direction, the number of destructive factors include:

In the second direction, the challenges to the new integration processes of Greater Eurasia are due to the danger of terrorists using the resources of the global cyber space and the digital economy.

Already today, hacker attacks or sabotage on critical objects of transport, energy and banking infrastructure, attempts by extremists to use the Internet to build control and supply channels, as well as to recruit and provoke panic, can serve as negative examples of such criminal acts. It should be clearly understood that “the main feature of the new era is that no one alone can solve global problems in economics and politics”.

Based on the current situation, it becomes obvious that further advancement of the integration processes of Greater Eurasia is in urgent need of early and comprehensive protection from the effects of international terrorism.

Implementation of joint political and military initiatives on regional security and counter-terrorism should be based on coordinated interstate legal approaches.

The adoption of standards and model laws in the field of the fight against terrorism, the formation of common lists of terrorist organizations is necessary.

A worthy example of international cooperation in the fight with terrorism is the fruitful interaction of countries on a comprehensive Syrian settlement in the format of the Astana process.

In turn, today the work of the deputy corps of the CSTO member states is aimed at accelerated development of the legal space, as well as the creation of effective counter-terrorism protection mechanisms and crisis response to the whole spectrum of possible challenges and threats to national security and sovereignty.

To effectively solve this problem, the CSTO Parliamentary Assembly uses model lawmaking, and the harmonization of laws and the adoption of model laws of the member states of the Organization have become the most important vectors of the parliamentary dimension and a part of its synergetic potential.

In accordance with internationally recognized obligations, the activities of the CSTO, including in the legal field, are aimed on “making a significant contribution to solving emerging challenges and addressing the threats facing the international community”. This primarily relates to the maintenance of international peace and security, as provided for in Chapter VIII of the Charter of the United Nations. These directions include “Conflict prevention and resolution, the fight against terrorism, transnational crime arms trafficking, emergency prevention and response”, as well as “Strengthening regional security and stability, peacekeeping the fight against drug and arms trafficking, countering organized transnational crime and human trafficking fight against natural and man-made disasters ”.

Unfortunately, most of the stated goals and principles reflected the destructive nature of global terrorism, its criminal economic and social manifestations, which emphasizes the advisability of joint international legal regulation of security issues.

At the same time, the experience of the CSTO model lawmaking in the field of combating terrorism, successfully tested in practice, can become a connecting link for international parliamentary organizations that decided to join forces in creating specific security mechanisms and developing dialogue, cooperation and coordination.

In total, about 100 model legal acts in the field of security have been sent to the national parliaments through the CSTO for practical use, directly or indirectly reflecting the problems of countering terrorism, taking into account existing legal standards.

In recent years, on the background of the expansion of the geography of terrorist crimes, the CSTO Parliamentary Assembly has been fulfilling the task of accelerated formation of a single legal space of the member states of the Organization in this area. Thus, the Assembly’s Program of Activities for 2016–2020 provides for the creation of legal acts in a number of relevant areas.

Issues of terrorist identification and destruction of their infrastructures are reflected in the following recommendations:

- on the harmonization of national legislations of the member states of the Collective Security Treaty Organization with regard to the recognition of organizations as terrorist (2018);

- on approximation of the legislation of the CSTO member states on the provision of international legal assistance in criminal matters as part of the fight against terrorism and cross-border crime (2017);

- on approximation and harmonization of the national legislation of the CSTO member states in the field of countering terrorism and extremism (2015),

- The concepts of normative legal regulation of ensuring the security of important socio-political, sports and other events of an international level in the CSTO member states (2018).

Currently, these CSTO model acts are acquiring a special resonant sound against the backdrop of new international initiatives to bring approaches to the definition of terrorism and create a single list of terrorist organizations.

Using the potential of the CSTO for their development and application will allow strongly ending the situation when terrorist organizations banned in some states act freely in others and make a real contribution from parliamentarians and international parliamentary organizations in the fight against terror.

In the field of information security developed:

- recommendations for improving the criminal law of the CSTO member states on the fight against offenses in the information sphere (2017).

The legal regulation of the issues of the prevention of technological disasters is covered by:

- recommendations on improving the legislative support for countering technological terrorism in the CSTO member states (2016).

Currently, the following legal acts are being intensively developed:

- CSTO Model Law “On Countering Technological Terrorism at the Fuel and Energy Complex”;

- on approximation of the legislation of the CSTO member states on the confiscation of property in the interests of combating corruption, the financing of terrorism and other types of crimes;

- to provide collective humanitarian assistance in response to emerging crisis situations in the territory of the CSTO member states;

- on harmonization of the legislation of the CSTO member states to ensure internal stability and counteract technologies of external destructive impact aimed at destabilizing the socio-political situation;

- to counter the illicit trafficking of weapons of mass destruction;

- to improve the national legislation of the CSTO member states on issues of unwanted migration,

- The concept of an action plan and tools for countering cyber threats and threats.

I consider it necessary to emphasize that the established practice of CSTO model law-making in a wide range of areas on the counter-terrorism track and aims to create maximum opportunities for the harmonization of national security law.

In general, the synergistic property of the CSTO model law-making is based on the following main points:

The best research organizations and experts of the Union countries, as well as the relevant structures of national parliaments are involved in the development of model laws and recommendations for their implementation.

Thanks to this approach, the CSTO model legal framework has acquired a modern, and in some cases proactive nature, which allows it to remain relevant on the medium term.

In general, these points convincingly testify about the high practical potential of the model lawmaking of the CSTO Parliamentary Assembly and the possibility of using it to bring together the positions of international organizations and parliaments of countries for collective security, joint counteraction against terrorism and the protection of integration processes of the countries of Eurasia.

Thank You for  Your attention!