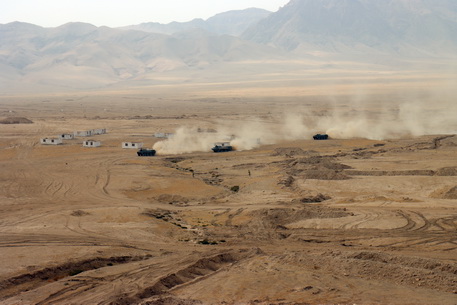 In the Republic of Tajikistan, the CAR CRDF "Rubezh-2022" training has been completed.

The training took place at the “Harbmaidon” training range near the border with Afghanistan. The subject of the training is "Preparation and conduct of combat operations by the CAR CRDF to destroy illegal armed groups that have invaded the territory of a CSTO member state”.

The final stage of the training was opened by the actions of Russian Su-25 attack aircraft flown from Kyrgyzstan to Tajikistan. The crews, operating at extremely low altitudes, practiced missile strikes on the militants' forward units using NAR-S-24 unguided aerial missiles. L-39 reconnaissance airplanes of the Air Force of the Republic of Tajikistan provided reconnaissance of targets.

A joint artillery group of units of the Central Military District and the Ministry of Defense of the Republic of Tajikistan stopped the advance of the main forces of "militants" deep into the territory of a CSTO member state.

The “Gvozdika” and “Acacia” self-propelled howitzers and “Grad” multiple rocket launchers delivered a massive fire attack on the “enemy” with concentrated fire. From closed firing positions, units armed with 120 mm 2B11 mortars and high-explosive fragmentation mines destroyed clusters of “enemy troops” hidden in the folds of the terrain at a range of more than 2,000 meters.

The Mi-24 attack helicopter crews provided continuous missile strikes against a cluster of militants. Operating at low altitudes, they entered the battlefield in pairs and launched unguided C8 missiles in a horizontal flight.

Also, in order to delay the advance of the "militants" and put psychological pressure on their combat formations, the engineering troops in cooperation with the units of radiation, chemical and biological defense, carried out an explosion of a 500-meter long berm.

At the end of the phase, special forces units of the CAR CRDF conducted an operation to liberate a settlement captured by "militants”.

A motorized infantry battalion group consisting of company tactical groups from Kazakhstan and Tajikistan advanced on the left flank to block enemy units and inflict a fire attack on them. Amphibious assault units of the Republic of Tajikistan arrived at the blockaded settlement to conduct an assault.

The commander of the CAR CRDF delivered an ultimatum to the "militants" holding the village, calling on them to lay down their arms and surrender. In response to their refusal, the command set a mission to destroy the enemy.

Tactical airborne landing of units of the Central Military District and the Ministry of Defense of the Republic of Tajikistan was carried out to eliminate the possibility of the enemy reaching the rear of the advancing units. Mi-24 helicopters provided air cover for the landing.

The motorized infantry battalion group of the Republic of Kazakhstan and the Republic of Tajikistan engaged the enemy with live fire from combat vehicles, small arms and grenade launchers. Having accomplished the task and captured surrendered and wounded "militants," the unit consolidated its position. The motorized infantry battalion group leader reported the completion of the mission and the elimination of the “militant” group.

Military contingents from the Central Asian region member states, operational groups of the CSTO Joint Staff and the CSTO Secretariat, a total of about 1,000 servicemen and more than 300 units of military and special equipment, including aircraft, helicopters and strike drones, took part in the practical trainings at the “Harbmaidon” training range. The core of the Russian contingent was made up of servicemen of the Central Military District from the 201st Military Base.