The CSTO Deputy Secretary General Valery Semerikov answered questions from the editorial board of the "Allies. CSTO” 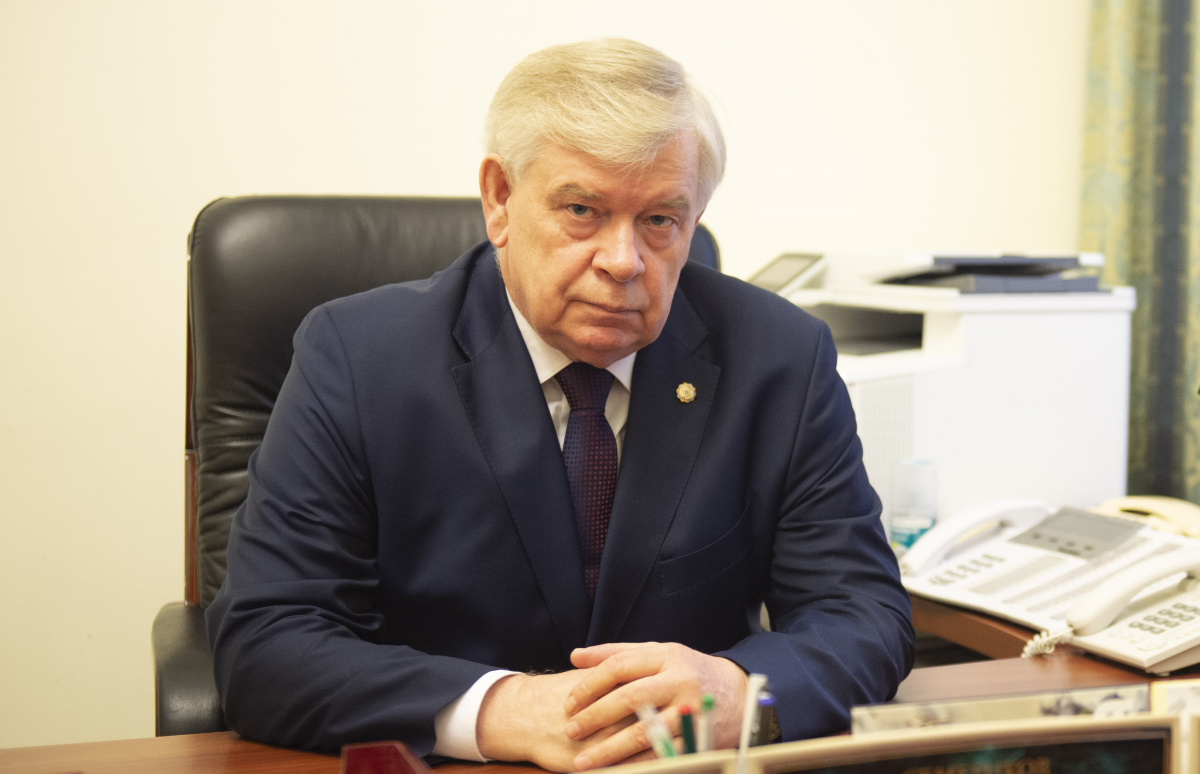 The Deputy Secretary General of the Collective Security Treaty Organization Valery Semerikov answered questions from the editorial board of the "Allies. CSTO”

V.A. Semerikov: With independence in the early 1990s, the post-Soviet countries found themselves in a new geopolitical reality. The newly created states faced many serious issues, the most important of which was the problem of security. It is no secret that the risks associated with serious destabilization of the situation existed both on the borders of the countries that had concluded the Collective Security Treaty and, in some cases, also within them. As global experience shows, no single state, even a very strong one, can cope with such challenges and threats alone, so the question of creating a collective security format has been raised with all urgency.

At first, the emphasis was primarily on protecting the borders of the Treaty member States from armed incursions from outside. Over time, however, a common understanding emerged of the need to counter such threats as terrorism, extremism, drug trafficking and illegal migration on a collective basis. This mission was entrusted to the Treaty Organization, established in 2002.

Today I can confidently and responsibly declare that the CSTO fully carries out its tasks. Our countries speak from agreed positions on many topical issues of the world agenda, actively cooperate with international and regional organizations in many areas of activity. The CSTO Collective Forces have been created, and their combat readiness and capabilities are systematically increasing. A system for countering challenges and threats to the security of the member States has been organized and is successfully functioning in the CSTO area of responsibility. The existing model of crisis response allows us to make prompt decisions on neutralizing this or that threat to the security of any CSTO member State on a collective basis, as happened in January of this year in the Republic of Kazakhstan.

"Allies.CSTO”: You mentioned the January events in the Republic of Kazakhstan. What was the peacekeeping mission in that country like for the CSTO?

V.A. Semerikov: First of all, this peacekeeping operation demonstrated the strong commitment of the Organization's member States to their allied obligations. It was also a demonstration of the swiftness with which the CSTO Collective Security Council assessed the situation and took a decision on the use of national contingents of peacekeeping forces.

Our peacekeepers acted professionally and coherently. The operation was highly praised, primarily by the leadership of the Republic of Kazakhstan.

At the same time, the January events were the occasion for serious analytical work. All stages in the development of the situation, as well as the actions of the CSTO bodies and Collective Peacekeeping Forces, were examined "under the microscope", as they say, by experts and the leadership of the Secretariat and the Joint Staff. As a result, a package of draft documents designed to increase the effectiveness of the crisis response system has been prepared. This autumn, we plan to submit agreed proposals for the consideration and approval of the heads of state.

"Allies.CSTO”: Why did the CSTO have such a composition of participants?  Are changes possible?

V.A. Semerikov: The CSTO was formed according to the regional, in this case Eurasian, principle. Among the main unifying factors, I would single out the common history of our peoples, their cultural affinity, mutual trust and focus on strengthening peace. The current model of collective security is entirely the result of the joint work of our countries and corresponds as closely as possible to the interests of their security.

At the same time, the CSTO is convinced of the need to consolidate efforts with international structures and individual States that share our goals and principles, and is therefore willing to consider involving them in the co-operation mechanisms that have been developed over the years of the Organization's existence. Our legal framework provides for the possibility of granting interested countries and international associations not only membership but also Partner and Observer status. Work is under way to that end.

"Allies.CSTO”: The interests of many world powers intersect in Eurasia. How acute is the issue of geopolitical competition in the space of the Organization?

V.A. Semerikov: The competitive environment in international relations, about which you said, is a given of the modern world, and the fact that the member States of the Organization work in parallel in the CSTO format to take advantage of cooperation with third countries, it seems natural. In line with this approach, the CSTO, as a collective institution, actively cooperates with other international structures and countries, and through all six members of the Collective Security Council, declares its openness to the world and its readiness to establish new partnerships.

However, it would be imprudent to ignore other contemporary realities. The international situation is such that not everyone perceives the CSTO's successes positively, and there are forces seeking to prevent its strengthening. Of course, we take this into account and are well aware of how to protect collective interests. We are working to unlock the potential of cooperation in the best possible way, to direct it towards addressing specific tasks facing our countries. These efforts provide member States with the payoffs of serious political and power guarantees of stability and security.

All aspects of the CSTO's work are subjected to the most thorough analysis, both in various collective formats and within each state. As a result, there is a strong consensus in governmental and serious expert circles in all six capitals, the essence of which is that there is no alternative to the CSTO in matters of collective security.

"Allies.CSTO”: Does membership in the CSTO impose any restrictions on states in foreign policy matters?

V.A. Semerikov: The fundamental principles of the CSTO are equal rights of its member States and the rule of consensus in decision-making. This means that the countries themselves determine the nature and extent of the restrictions they are willing to assume within the Organization.

At the same time, given the particular importance of the problems of collective security, our capitals have always proceeded from the fact that this sphere includes a number of issues that imply a special level of mutual understanding and trust. In particular, an agreement has been reached that member States will not station military infrastructure facilities of third countries on their territory without the agreement of their CSTO allies; a corresponding Protocol was signed by the heads of state in 2011.

The Organization also clearly regulates the equipping by armament of units and subunits belonging to the CSTO Collective Forces with weapons and equipment. This is done for the purpose of operational and technical compatibility in carrying out joint tasks.

"Allies.CSTO”: Perhaps the most pressing issue on the international agenda are the events in Ukraine. Is the Organization taking any action in this direction?

V.A. Semerikov: The events in and around Ukraine directly affect the interests of at least two CSTO member States - Russia and Belarus, and at the initiative of Moscow and Minsk this topic was discussed during the last anniversary meeting of the leaders of member States. However, there is no talk of any action in the CSTO format.

It goes without saying that the Secretariat of the Organization is monitoring and analyzing the entire situation in this area. We are paying close attention to the actions of the United States and other Western countries near our borders.

"Allies.CSTO”: What main factors and trends, in your opinion, determine today's political picture of the world and will influence it in the foreseeable future?

V.A. Semerikov: The CSTO has to act under conditions of growing international tension, the continuing degradation of the system of global and regional security. The likelihood of nuclear proliferation and messages about the possibility of its use are of great concern. The problems of terrorism, extremism, drug trafficking, and illegal migration remain acute. The population of some regions of the world increasingly faces a shortage of food and clean water. The problems of biological security are of particular importance - just recently we saw a viral pandemic that paralyzed life on a global scale for a long time.

At the same time, we are witnessing the breakdown of the system of international relations that has existed since the late 1980s, based on the dominance of the United States and Europe. New centers of political and economic influence are being formed and strengthened: China, Russia, India, Turkey, Iran, the Arab states. It is no exaggeration to say that all these countries are strong and ambitious players, ready to persistently promote their views and interests.

The CSTO aims to make the world more stable and predictable through the efforts of all parties concerned, with strict observance of international law and respect for the legitimate interests and rights of all states.

"Allies.CSTO”: What do you consider most important in the work of the CSTO in terms of defending the interests of the member States in the light of current and future changes?

V.A. Semerikov: First of all, we must deeply understand what is happening both in the CSTO area of responsibility and in the world as a whole, objectively assess events and trends and calculate their consequences. Modern security is a highly intellectual sphere, which demands exceptional knowledge, analytical skills and the ability to think outside the box from the specialists involved in it. Consequently, the task of fully strengthening the functions of analysis and forecasting as the basis for the development of verified solutions comes to the fore.

It is extremely important to realize that membership in an influential politico-military alliance is a great privilege that gives significant advantages in the face of global turbulence. For this purpose, it is necessary to consistently strengthen mutual trust, demonstrate high solidarity in international affairs, and more actively defend the interests of allies on the world stage. We should also be more proactive in terms of interaction with outside forces. We see great potential in resolving many issues related to security in strengthening confidence-building measures in the world and organizing close cooperation between specialized structures of international and regional organizations. It is necessary to convincingly demonstrate to the world the attractiveness and reliability of the Organization and the fairness of its goals and principles of action.

One of the key requirements for a politico-military alliance is the presence of a strong collective force component. For this reason, we must strive for a higher level of training of the collective forces, their combat cohesion, and pay particular attention to equipping them with the most modern weapons and armament and maintaining a high level of combat readiness.

"Allies.CSTO”: Valery Anatolyevich, thank you very much for the conversation.