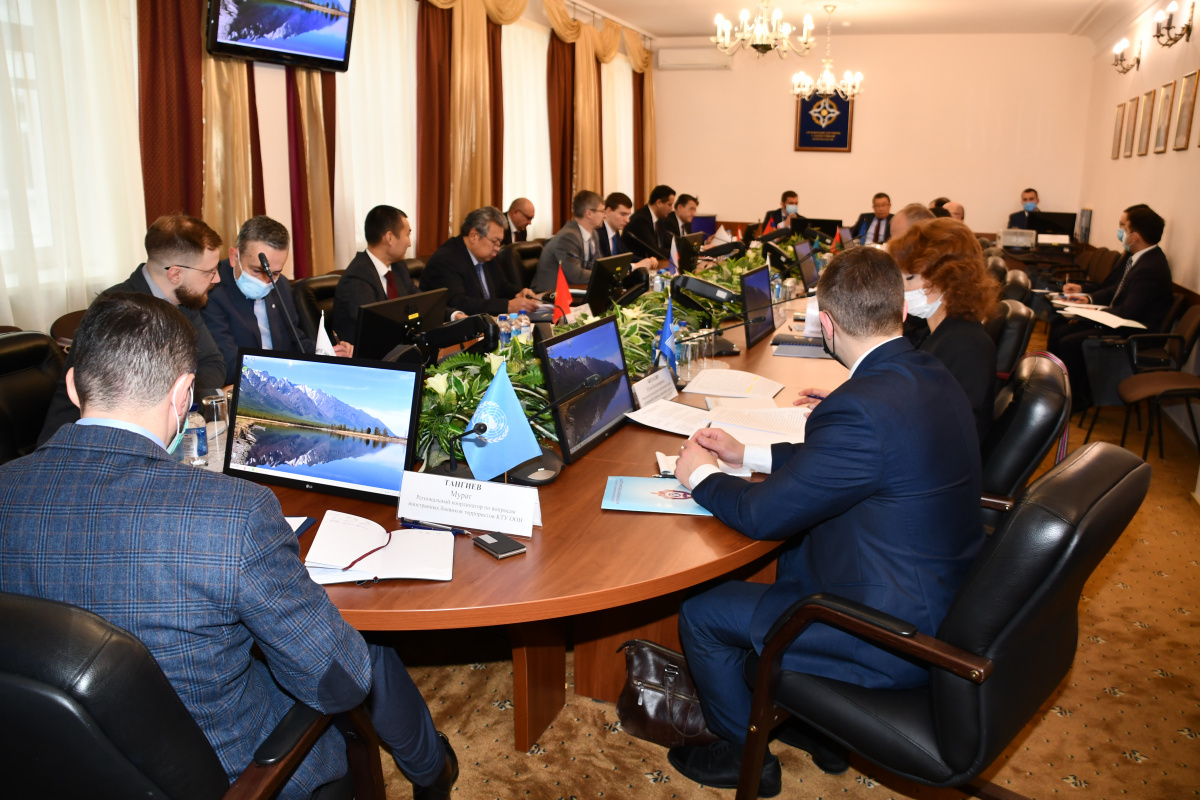 On November, 26, 2021, the 34th meeting of the CSTO Working Group on Afghanistan under the auspices of the CSTO CFM (WGA) was held at the CSTO Secretariat with the participation of the CSTO Deputy Secretary General Samat Ordabaev and chaired by the Head of the Working Group, National Coordinator of the Republic of Armenia for Afghanistan David Virabyan. The meeting was also attended by representatives of the UN Counter-Terrorism Office, CIS ATC, SCO RATS and ICRC.

Meeting participants had detailed exchange of views on the politico-military situation in Afghanistan and the post-conflict rehabilitation of the country, including training for the Afghan government. The results of the group's work for the second half of 2021 were summarized.

Assessing the situation in Afghanistan after the Taliban came to power, Samat Ordabaev, the CSTO Deputy Secretary General, noted that the flight of Western military contingents, the takeover of Kabul by the Taliban and the fall of Ashraf Ghani administration led to a drastic degradation of the military-political, economic and humanitarian situation in Afghanistan. "The danger of pushing fighters of terrorist groups to the territories adjacent to Afghanistan and their penetration into our countries under the guise of refugees, not to mention the drug threat and the prospect of the spread across the region of weapons left by the Western coalition, has risen”. - Samat Ordabayev said.

He informed that due to the deteriorating situation and increasing threats to the collective security of the CSTO member States in the Central Asian region, on August 23, this year, an extraordinary session of the CSTO CSC was held, which was also attended by the President of the Republic of Uzbekistan Shavkat Mirziyoyev. As a result of the extraordinary session, the CSTO Secretariat formed a list of measures to implement the proposals of the CSC members, in which the first item was the completion of the Special Interstate Policy on Strengthening the Tajik-Afghan Border Sections," the CSTO Deputy Secretary General informed.

The CSTO Deputy Secretary General Samat Ordabaev emphasized that the Afghan issue was also the focus of attention in the course of the meetings of the ministers of foreign affairs, the ministers of defense and secretaries of the security councils of the Organization's member States, which took place on 15 and 16 September. During the discussions, there was a proposal to expand the format of the group's work.

In particular, there were initiatives to invite delegations from other international structures active in the field of international security to meetings of the WGA, as well as to hold a joint meeting of the WGA under the CSTO CFM, the Working Group on Information Policy and Information Security and the Working Group on Fighting Terrorism and Extremism under the CSTO CSSC on the Afghan issue.

Meeting participants also exchanged information on the provision by CSTO member States of humanitarian aid to the population of Afghanistan. Particular attention was drawn to the need for the international community, with the UN coordinating role, to take effective measures to support Afghans suffering from disease, hunger and violence.

Information on training of law enforcement, customs and anti-drug structures for the countries of the Central Asian region and Afghanistan was considered.

At the end, the Protocol of the meeting and the Work Plan of WGA for the first half of 2022 were adopted.