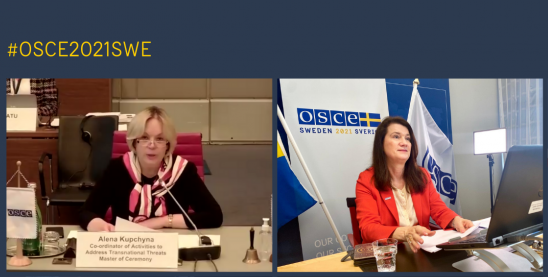 The CSTO Secretariat representatives took part in the annual OSCE Counter-Terrorism Conference, which took place on April 20 - 21, 2021, under the Swedish chairmanship with the support of the OSCE Transnational Threats Department. The event was held in the format of a videoconferencing. More than 500 participants were registered for this event. A wide range of issues were considered to strengthen an integrated approach in preventing and countering terrorism, violent extremism and radicalization leading to terrorism (VERLT) in a changing environment”.

Representatives of the Republic of Armenia, the Kyrgyz Republic, and the Russian Federation took an active part in the conference. The CSTO Secretariat representatives spoke during Session II, where they discussed the issue of tools for preventing terrorism and strengthening an integrated approach to preventing and countering terrorism, violent extremism and radicalization that lead to terrorism on the Internet. In the speech, it was noted that based on the experience gained during the Organization's ongoing operation since 2009 to counter crimes in the information and communication environment, it was concluded that the problem of countering terrorism in this area was divided into two components:

– counterpropaganda, which makes it possible to challenge the basic tenets of jihadist ideology.

Due to the fact that the effect of blocking individual terrorist accounts does not bring the desired effect, the priority is given to the need to focus efforts on effective counterpropaganda of terrorist ideas on the Internet, which should differ in the stage of user involvement.