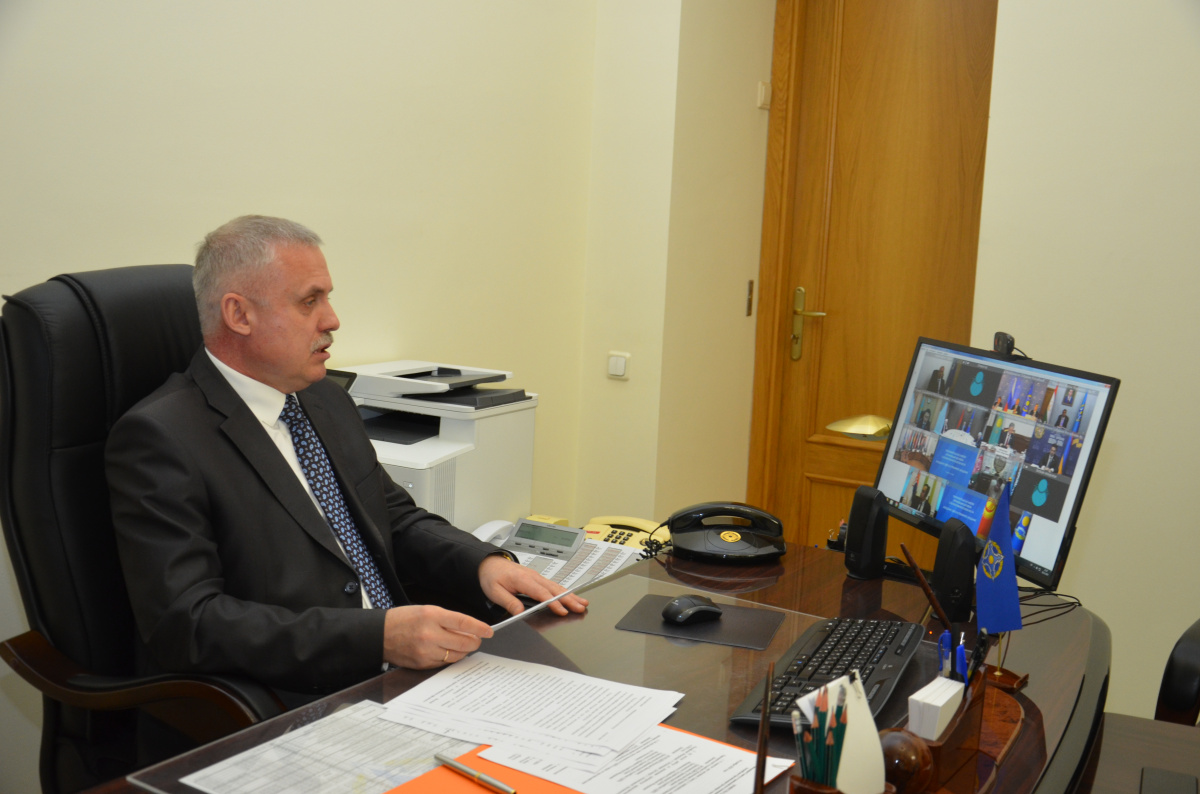 On November 30, this year, the CSTO Secretary General Stanislav Zas took part in the meeting of the Council of the CSTO Parliamentary Assembly and in the thirteenth meeting of the Parliamentary Assembly of the Collective Security Treaty Organization, which was held via videoconferencing under the chairmanship of the Speaker of the State Duma of the Russian Federation Vyacheslav Volodin.

The meeting was attended by parliamentary delegations of all six CSTO member states and observing parliaments at the CSTO PA.

Stanislav Zas informed the CSTO PA members about the situation in the CSTO zone of responsibility in the East European, Caucasian and Central Asian regions of collective security, as well as about measures to counter challenges and threats. In his opinion, the current situation was formed against the backdrop of growing international tension, aggravated by the coronavirus pandemic and the associated significant deterioration in the global economy. “However, in the CSTO area of ​​responsibility, control over the situation was maintained,” the CSTO Secretary General said.

He said that in these conditions, the CSTO continued to step up efforts to improve the system for ensuring collective security, the implementation of the Decisions of the November (2019) session of the CSTO Collective Security Council and the priorities proposed by the Russian Federation for the period of its chairmanship in the Organization.

In 2020, in the CSTO format, 15 such statements were adopted, which reflect the common positions of the CSTO member states on the most important and topical issues of the international agenda. “The signing and publication of the joint statement of the UN Secretary General and the CSTO Secretary General in connection with the 10th anniversary of the Joint Declaration on Cooperation between the Secretariats of the two Organizations contributed to the strengthening of the position of our Organization in the international arena,” Stanislav Zas emphasized.

He noted that interaction with the UN and other international organizations continued to be one of the priority areas of the Organization's activities in the international arena. In the course of a recent virtual dialogue with the leaders of international organizations, organized by UN Secretary General Antonio Guterres, the CSTO's position on the lack of alternatives to a multilateral approach to responding to modern challenges and threats, including a pandemic, was brought at a high level. “The emphasis was on statements by the Ministers of Foreign Affairs of the CSTO member adopted at the CSTO Ministerial Council in May of this year states on adherence to the goals and principles of the UN Charter, support for the UN Secretary General's call for a global ceasefire in connection with the pandemic, as well as solidarity in the fight against coronavirus infection,” the CSTO Secretary General said.

In 2020, cooperation with the UN on peacekeeping issues intensified. “An agreement was reached on the establishment of a Joint Working Group of the CSTO and UN Secretariats at the expert level to use the potential of the CSTO in the UN peacekeeping activities,” Stanislav Zas informed the CSTO PA members.

Contacts between the CSTO and the OSCE have been continued. “In a virtual format, representatives of the leadership of the CSTO Secretariat took part and spoke at the meeting of the OSCE Annual Security Conference on the Security Review held in June this year and at the OSCE-wide Annual Counter-Terrorism Conference “Effective Partnership against Terrorism and Violent Extremism and Radicalization Leading to Terrorism,” the CSTO Secretary General said.

With regard to countering challenges and threats, the CSTO Secretary General noted that terrorism continued to be one of the main threats to the collective security of the CSTO, and priority attention was paid to combating it. “In order to close the channels of recruitment, exit/entry of citizens of the Organization's member states to participate in terrorist activities and neutralize the resource base of terrorist organizations, the “Mercenary” operation has been carried out under the auspices of the CSTO since 2019, and work is underway to implement “The Collective Action Plan of the CSTO member states for the implementation of the UN Global Counter-Terrorism Strategy for 2019-2021," Stanislav Zas said.

As part of this work, in particular, the national experience of the member states of the Organization for the prevention of terrorism is summarized, incl. implementation of programs for deradicalization of the religious people, developments in countering the information and psychological impact of terrorist ideology.

To suppress the use of information and communication technologies in the interests of the international terrorist international, including the recruitment of new members, in the CSTO format, another permanent operation "PROXY" was carried out.

“For the first half of 2020, according to the results of the “PROXY” operation, there is an increase in the number of revealed facts that testify to the commission of crimes using the field of information technology and illegal actions against the CSTO member states and their citizens. According to the results of checks of the revealed illegal facts on the Internet, more than 30 thousand criminal cases have been initiated,” the CSTO Secretary General Stanislav Zas said.

He also noted that efforts were being stepped up to combat the drug threat. “A draft decision of the Collective Security Council “On the Anti-Drug Strategy of the CSTO Member States for 2021-2025” is submitted for approval by the CSTO Statutory Bodies, the Secretary General of the Organization informed the participants of the CSTO PA meeting.

Concluding his speech, Stanislav Zas reported on the activities of the CSTO to localize the possible negative impact of the events taking place in neighboring Afghanistan and to reduce tensions in the Tajik-Afghan border area. “Work is underway to form a Target Interstate Program to strengthen the Tajik-Afghan section of the state border,” the CSTO Secretary General said.