From the Treaty to the Organization CSTO Structure Management General General General Documents Photo Video Contacts
Photo exhibition News One victory for all Photo
Photo exhibition News One victory for all Photo
01.05.2020
There were 64 of them: Who are they, Heroes of the Soviet Union from the Republic of Tajikistan
25.04.2020
Every fifth resident of the Republic of Armenia went to the front ...
During the war years, more than 300 thousand natives of the Armenian SSR were mobilized into the Soviet Army, another 200 thousand ethnic Armenians were called up to the front from other Soviet republics.
22.04.2020
Kyrgyzstan in the time of the Great Patriotic War of 1941-1945
17.04.2020
The contribution of the Belarusian people to the achievement of the Great Victory is invaluable
17.04.2020
The Republic of Tajikistan: “Chronicles of the War of Mirzosharif Gafurov”

The Republic of Tajikistan: “Chronicles of the War of Mirzosharif Gafurov” 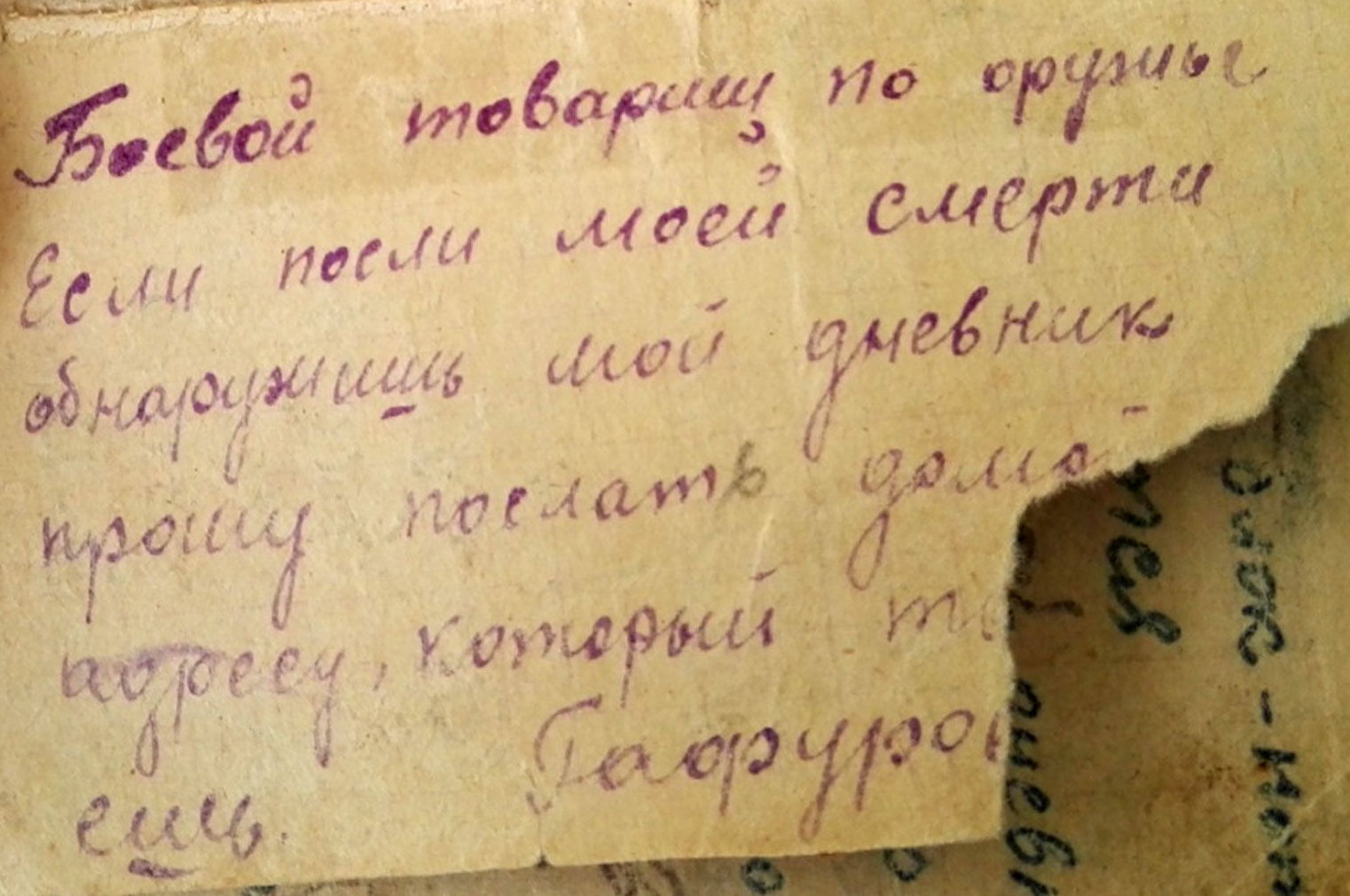 Material grains in memory of the heroic days and nights - old orders, letters, elements of a military uniform miraculously preserved by the grandchildren and great-grandchildren of the heroes of the Great Patriotic War become for us more and more valuable, figuratively speaking, the further away the victorious May of 1945 moves away from us. More value today, are soldier’s diaries. Very few of the soldiers and commanders of the Red Army recorded on paper what they saw and experienced on military roads. In addition, many of these hasty short notes, chronicles were lost in the post-war whirl of activity. But what remains, what descendants have today, is especially valuable and significant. Indeed, each such record, sometimes illegible, hasty, faded, is like an invisible thread connecting us with an amazing and heroic past ...

Recently I had a chance to read that in the Republic of Tajikistan, the grandchildren and great-grandchildren of the 101-year-old resident of the Sogd region, Mirzosharif Gafurov, decided to publish the front-line diaries of their great-grandfather. They believe that not only the name of their grandfather, but also the memory of the Great Patriotic War, will be preserved.

... Mirzosharif Gafurov was born on January 7, 1922, in the village of Rumon. In 1940 he was conscripted for military service. Then he was only 18 years old. He studied in the second year of the Pedagogical College named after S.M. Kirov in Khujand (now - Khujand Humanitarian College named after B. Gafurov). After graduation, the young man planned to work as a teacher of physics and mathematics. But first, it was necessary to serve in the Army. Private soldier Gafurov was sent to serve in Kushka in Turkmenistan. Then, according to the veteran, everything was calm and quiet. It never occurred to anyone that in a year with a little the Great Patriotic War would break out, from the smoke of which the bright sky would blacken.

“On June 22, 1941, at 4 o’clock in the morning, the Nazi troops treacherously attacked the Soviet Union and started the war,” Mirzosharif recalls. “Then I was in Kushka.” Later I was sent to Firuza, then to Tashkent, after some time to Moscow. So began my participation in the Great Patriotic War against the Germans ...

Every day of the war ended in terrible events, few people thought that they could survive. Gafurov even wrote on the page of his army notebook a small request to the "comrade in arms" - in case of death, send this notebook to his parents at the specified address in the Republic of Tajikistan ...

With pencil or ink on several sentences Mirzosharif wrote down his impressions of what he saw near Moscow, near Kursk, Smolensk ... He started the war in the infantry, and therefore he had enough impressions ... And what can we read in the front notebooks of a fighter from the Republic of Tajikistan? Here are some notes from one of the notebooks ...

07/15/1941. In Bogir they gathered all who had secondary and higher education. There were divisional trainings.

08/25/1941. We arrived in Tashkent by train. In the Stalinist camp, I saw my fellow villager Abdugani Vakhobov and course mate Sobir Yokubov.

01/06/1942. We left Borosov station, here were one burned down village. Two days spent the night in the trenches.

01/09/1942. They received an order to perform a clearing operation in the village of Vzyaginsovo. They fought all day, the Germans shoot back. ... We managed to free the village from enemy, but our 17 people were injured. My commander always reproached me for my short stature and I couldn’t get to my other comrades. He said that I would die before anyone else from the bullet of the enemy, but in the end he died on the first battle. Sereshev was a good man.

01/20/1942. At 12 a.m. they gave the order to free another village from enemies. The Germans, learning about this, themselves fled. Two more villages were taken with a march, but they were burned down and there were no people left except for the elderly. The Germans took all the young adults with them.

In one of the notes, Mirzosharif described how enemies were burned in one school. On January 26, 1942, Soviet soldiers received the order "to free the territory of Elena from the Germans." Of course, some Germans managed to escape, but about 400 more people were hiding in school.

If someone tried to escape, then fell under bullets and died on the spot.

“In one night we have killed 67 soldiers, but they still did not surrender. 33 our soldiers were injured. In order to kill all Germans, we decided to burn the school. We sprayed kerosene around the school and set it on fire. .... We no longer had a way out. The Germans did not want to surrender, but someone jumped out with their hands up. ... Ours began to scoff at him. I could not stand it and shot him in the head. Then mine comrades got offended: “It was necessary to torture him to death, and you made the death easier for him,” they reproached me. I pleaded guilty. " 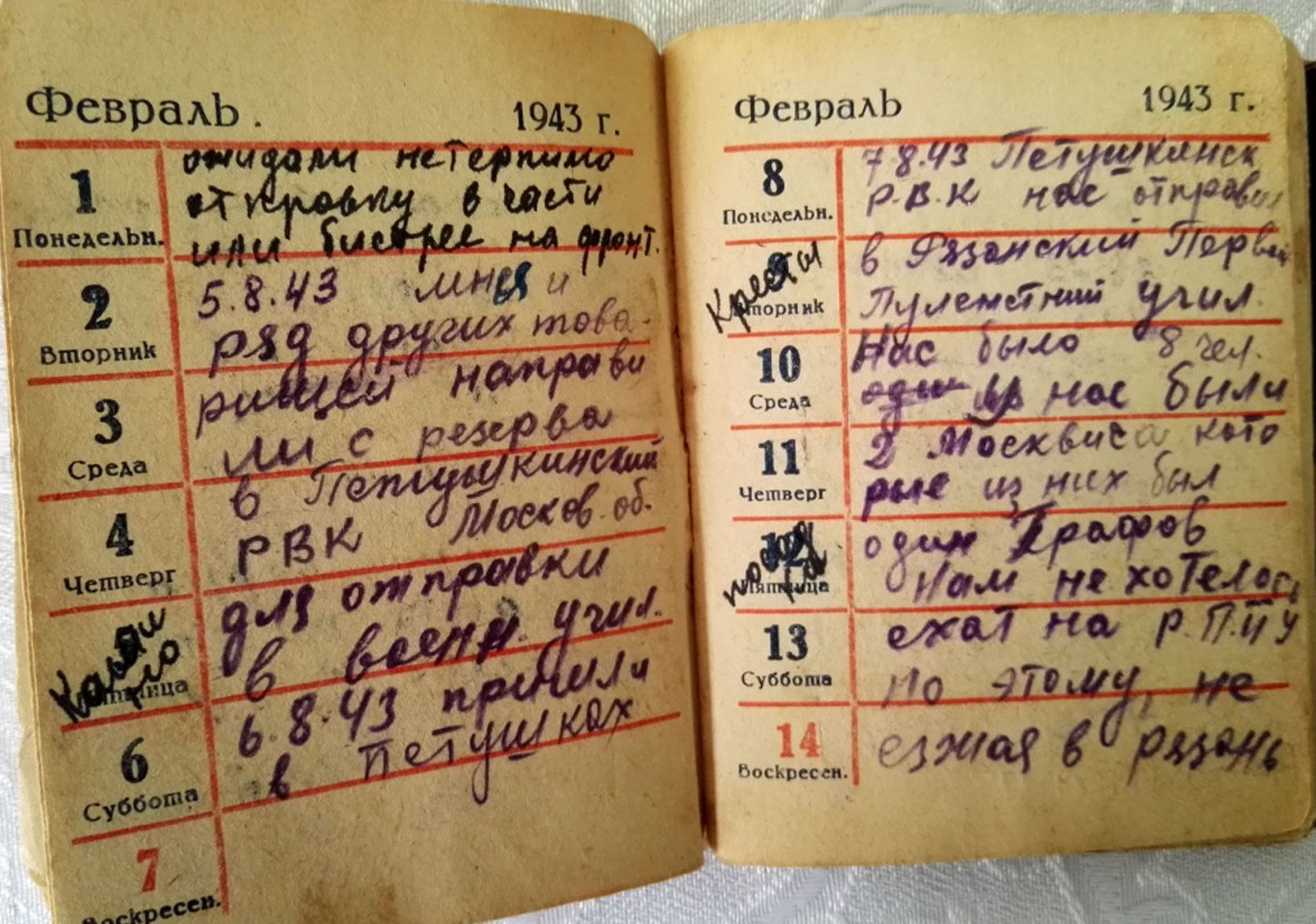 We also learn from the front notes that the veteran was wounded twice, but he survived. Mirzosharif got his first wound, being in the trenches, in positional battles.

“We had to perform a clearing operation in one village. In the deep snow, we have to duck for cover in the trenches for several hours. When I wanted to make myself a comfortable place, I felt a burning pain in my right ear, as if someone had hit me with a brick. I felt the head rush and I fell. Around me were my comrades in arms, and one of them ran up to me. It became clear that it was a shot that slightly touched the ear and passed by ... "

“When I got to the hospital the wound had already healed, but inflamed because of the cold,” he writes, “I was given a sick leave for three days.”

Next time, Mirzosharif Gafurov was wounded on January 18, 1943. While in the village of Ivanovo, five kilometers from the Chernozem station, he stopped two bullets in his left hand. Gafurov was taken to the hospital in Pravdinsk, but two months later, he returned to the front.

In August 1943, Mirzosharif Gafurov, as an experienced warrior, was sent to study at the Penza Military School. When he was in his second year, the war ended.

“My father was offered to get a military education or to finish his studies at a pedagogical institute in the Republic of Tajikistan,” the son of a veteran Tokhir Gafurov said, “he had chosen the teaching because he always wanted to pursue the career.” Moreover, his bride, my mother, was waiting for him at the home. They were seized before the army, but the war parted. They only got married in 1946 - all this time she was waiting for him ...

Mirzosharif managed to return to his relatives, wholesome and alive. He married Bibisharifa, who had been waiting for him all these years. In the marriage of the Gafurovs, nine children were born. And now the number of children, grandchildren and great-grandchildren of "Grandfather Mirzosharif" has grown up to two hundred people.

After the war, in 1958, Mirzosharif finally graduated from the Khujand Pedagogical School. Until 1979 he worked as a teacher in his village, in his school. But even after retiring, Mirzosharif continued to work. On the recommendation of his fellow villager Abdullohodzh Ismoilov, who was his brother-soldier during the Great Patriotic War, Gafurov began to engage in floriculture. The veteran has several greenhouses on the plot. His sons are also engaged in floriculture. Now Mirzosharif lives happily with his children, grandchildren and great-grandchildren. The veteran thanks God for giving him more than 100 years in this world. 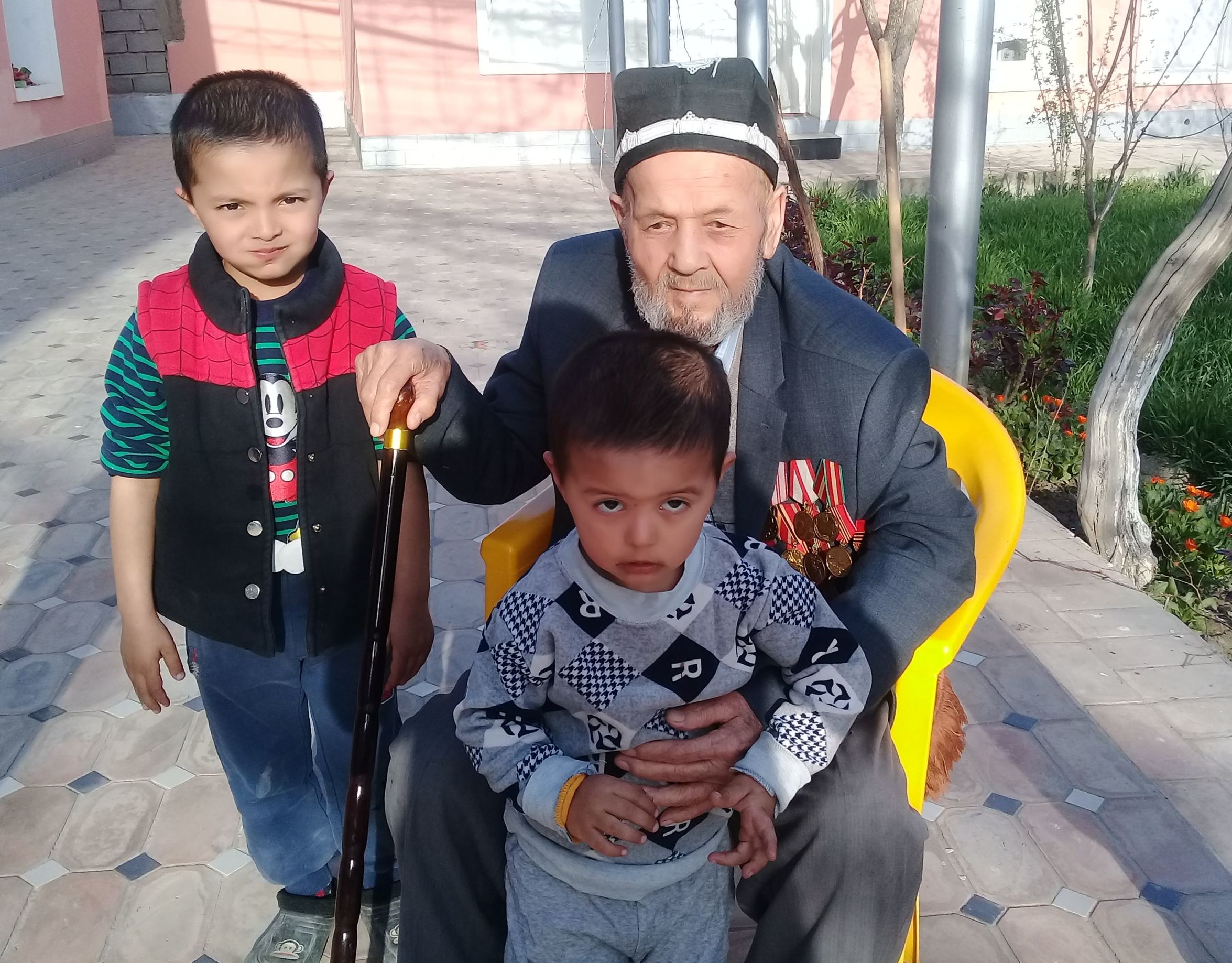 It remains for us to add that just as today the Republic of Tajikistan is faithful to its allied obligations in the Collective Security Treaty Organization, so then, in the formidable forties of the Great Patriotic War, the Republic was reliable and loyal to its great homeland - the USSR. On the fronts of the Great Patriotic War in 1941-1945, more than 300 thousand residents of the Republic of Tajikistan fought. The 61st Cavalry Division formed in different regions of the Republic of Tajikistan took part in the Battle of Stalingrad. Envoys of the Republic fought in the units of the Red Army that waged war with the Nazi invaders in the Kursk Bulge, in the Republic of Belarus, the Baltic states and Poland, captured Berlin ... More than 92 thousand Tajiks did not return home. And, for example, from the Sughd region - the small motherland of Mirzosharif Gafurov - 76 thousand people went to war, and only 30 thousand returned. From the family village of Rumon, where Mirzosharif was born and raised, 100 people left for the war, but only 30 survived ... We will always remember them ...