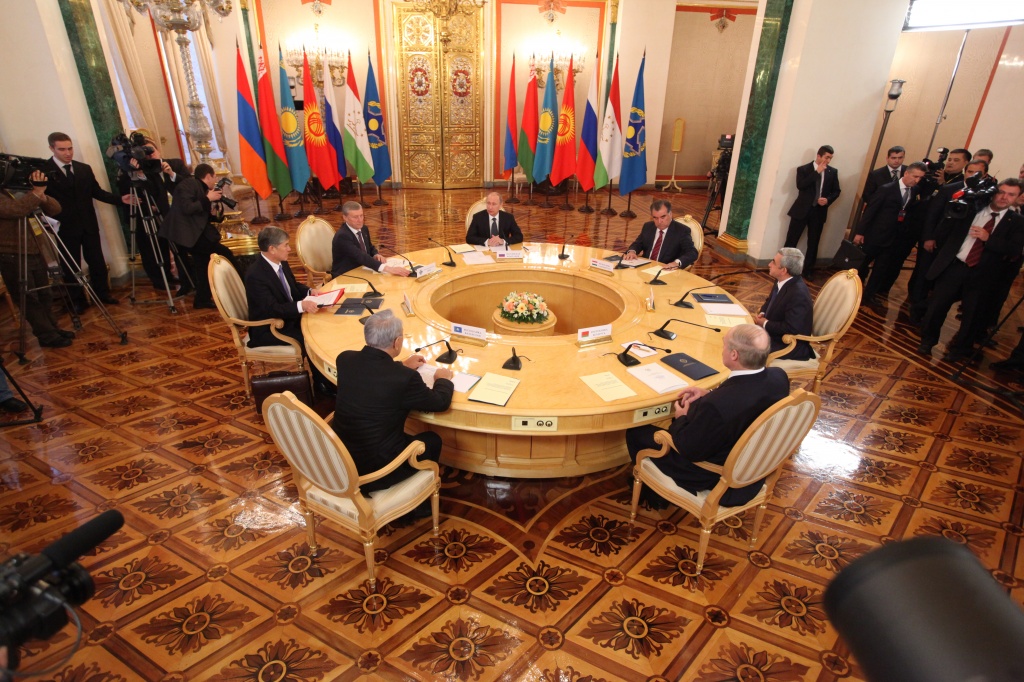 The heads of the CSTO member states at the session of the Collective Security Council made decisions on the development of the military component until 2020, on developing a system of collective response to emergency situations, suspended Uzbekistan’s membership in the Organization’s activities, determined measures to counter threats emanating from the territory of Afghanistan, and appointed the head Joint CSTO headquarters on an ongoing basis. Nikolai Bordyuzha was appointed to the post of Secretary General of the CSTO for another three-year term. 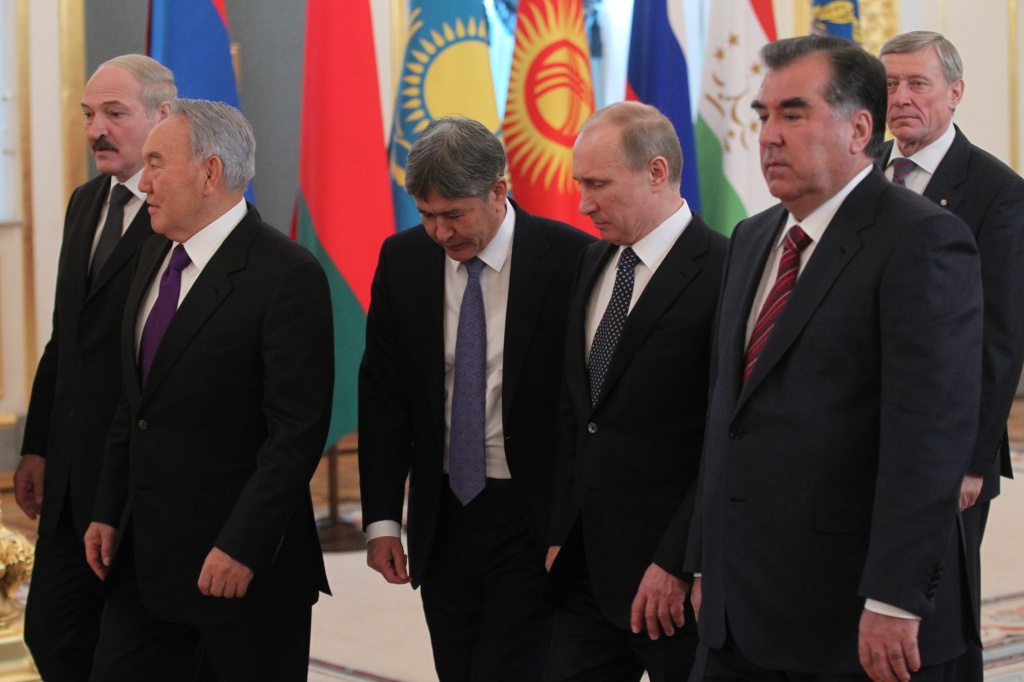 The meeting of the special design bureau was held in a narrow composition, incl. on some issues involving the defense ministers of the CSTO member states, and in plenary session format. The chairmanship in the Organization passed from Kazakhstan to Kyrgyzstan. In 2013, the President of the Kyrgyz Republic Almazbek became the CSC Chairman. Atambayev.

CSTO Secretary General Nikolai Bordyuzha spoke about the state of the Organization and the documents proposed for signing.

The heads of state of the Collective Security Treaty Organization adopted The statement , which, inter alia, states: “We consider it necessary to step up efforts to improve the effectiveness of the Organization’s collective security system, taking into account the evolving international situation, which is characterized by the persistence of conflict potential and attempts to circumvent international law, which negatively affects security and stability in the region and the world as a whole.” The statement is circulated in the media. 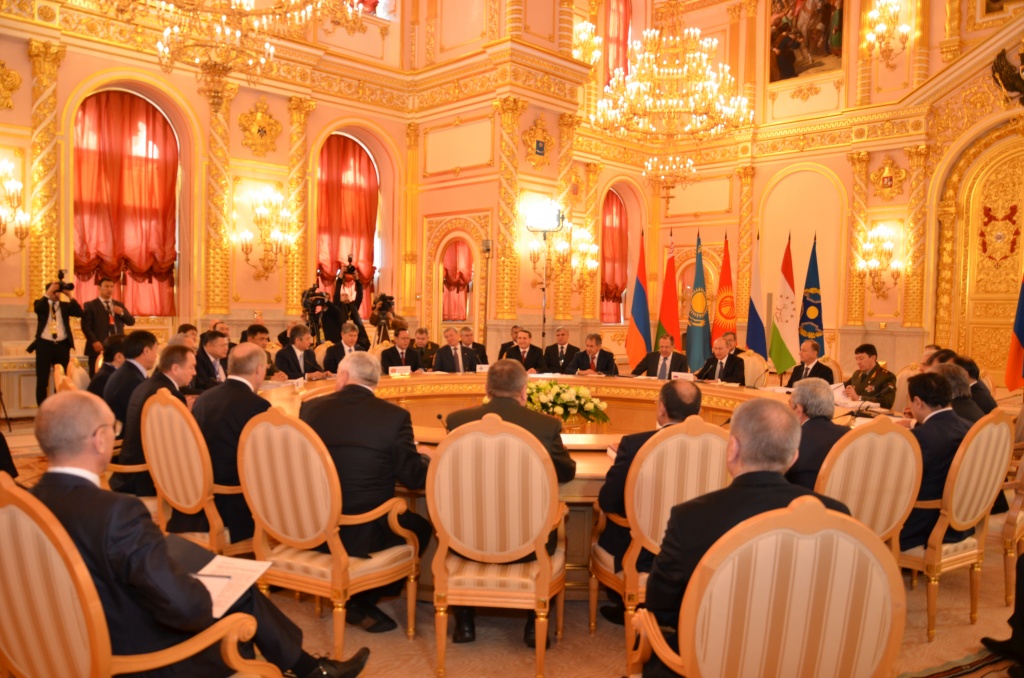 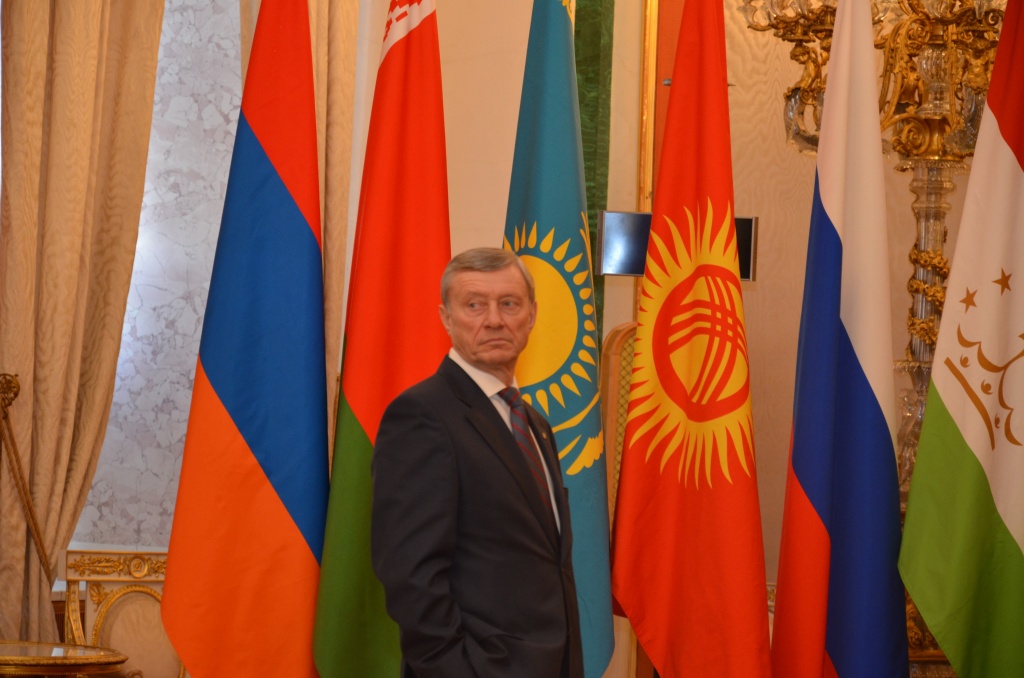 characterized by relative stability. There are no obvious threats of armed conflict with neighboring countries, no facts of military confrontation within member states, direct indications of the possibility of destabilization of the situation in the near future.

At the same time, the situation in Afghanistan has a negative impact on the situation in a number of CSTO member states and in general. This country is today a zone of instability, a source of spreading the ideas of Islamic fundamentalism, the territory of the armed groups of terrorist and extremist organizations, as well as training camps for militants, including from among the citizens of the Organization's member states. 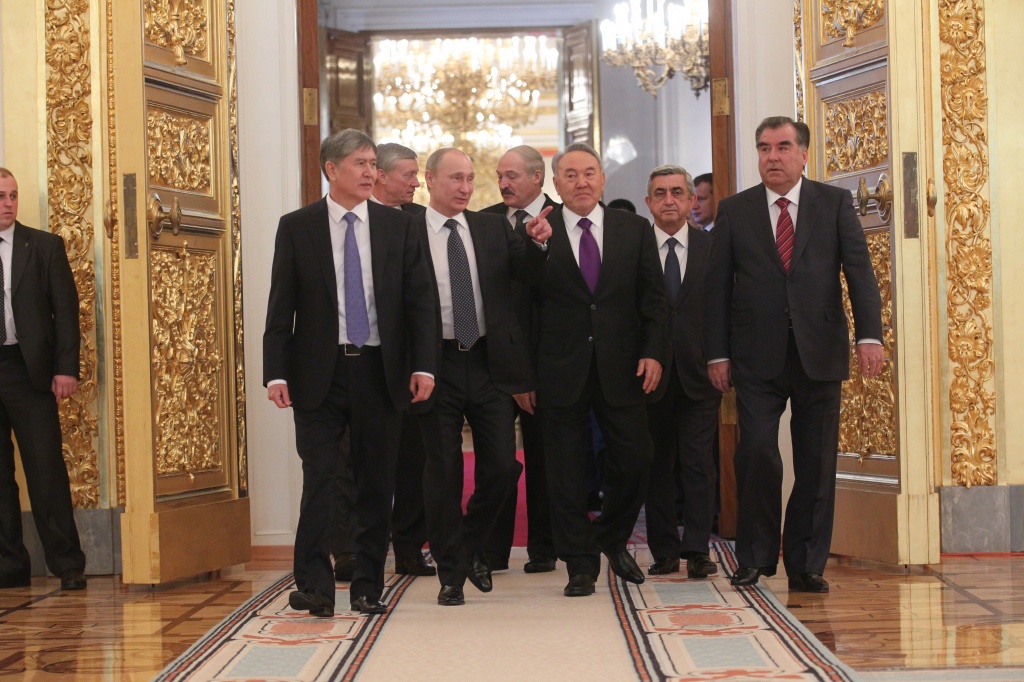 The CSTO Secretary General N. Bordyuzha presented a forecast of the development of the situation in Afghanistan in the medium term until 2015. It was noted that the situation in Afghanistan remains tense and poorly predictable. The terrorist activities of the irreconcilable armed opposition are not weakening, and in some parts of the country are even intensified. There are practically no results in the fight against drug production , the level of corruption is very high, the national armed forces and law enforcement agencies are not yet ready to fully ensure the security of the country.

Concerning the decision was taken by the CSC providing measures to counter threats emanating from the territory of Afghanistan and aimed at reducing the negative impact on the situation in the CSTO member states by the IRA after the withdrawal in 2014 of the main part of the International Security Assistance Force contingent .

Presidents have decided to approve the main directions of development of the collective emergency response system, which provide for the further development of the collective emergency response system of the CSTO member states. The document envisages the implementation of a list of specific practical measures that, together, will create an effective response mechanism for the Organization’s member states to emergencies caused by both natural and man-made factors, and conduct humanitarian operations in the region of the CSTO responsibility involving a wide range of international and non-governmental organizations. 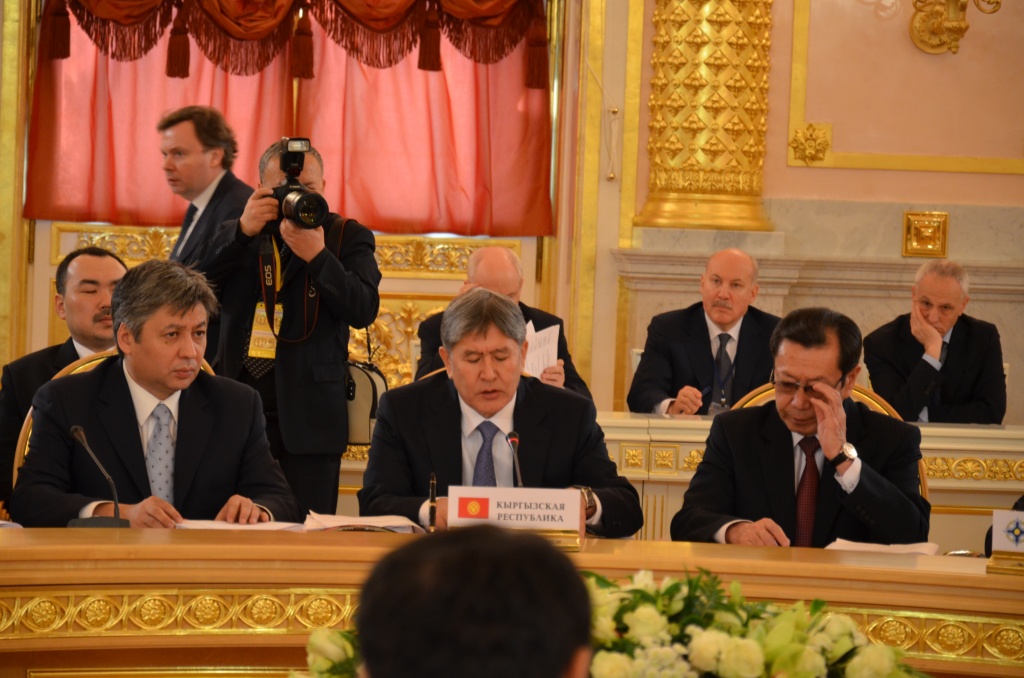 In particular, in order to ensure further progressive development of the collective response system of the CSTO member states to emergencies in a strategic perspective, the deployment of humanitarian centers in the CSTO collective security regions, including the development of a legal framework, deployment of material resources technical and financial support of these centers, as well as the creation in the collective security regions of the OD B groups of rescue teams.

The document envisages the development of a single information and software space of the Organization for conducting regular information exchange and joint monitoring of the CSTO space in the field of the collective response system of the CSTO member states to emergency situations, as well as ensuring interaction of the member states in joint actions. Much attention is paid to the coordination of activities of non-governmental and international organizations in order to use their potential in providing assistance to victims in emergency situations.

A mechanism of preferential procurement of special equipment will be created to equip rescue formations and expand cooperation in improving personnel training for emergency departments of the CSTO member states, organizing joint training of rescue formations.

Regarding the request of the Republic of Uzbekistan to suspend participation in the CSTO activities ( the CSTO Secretariat received a corresponding note from the Uzbek side in June of this year ), during the CSC meeting it was noted that from a practical point of view, the decision of the Republic of Uzbekistan will not have a significant, noticeable effect on functioning of the organization. Uzbekistan practically did not participate in military cooperation of the CSTO. He did not recognize the necessity and expediency of coordinating foreign policy activities. He took occasional participation in joint activities to counter challenges and threats in the CARs. 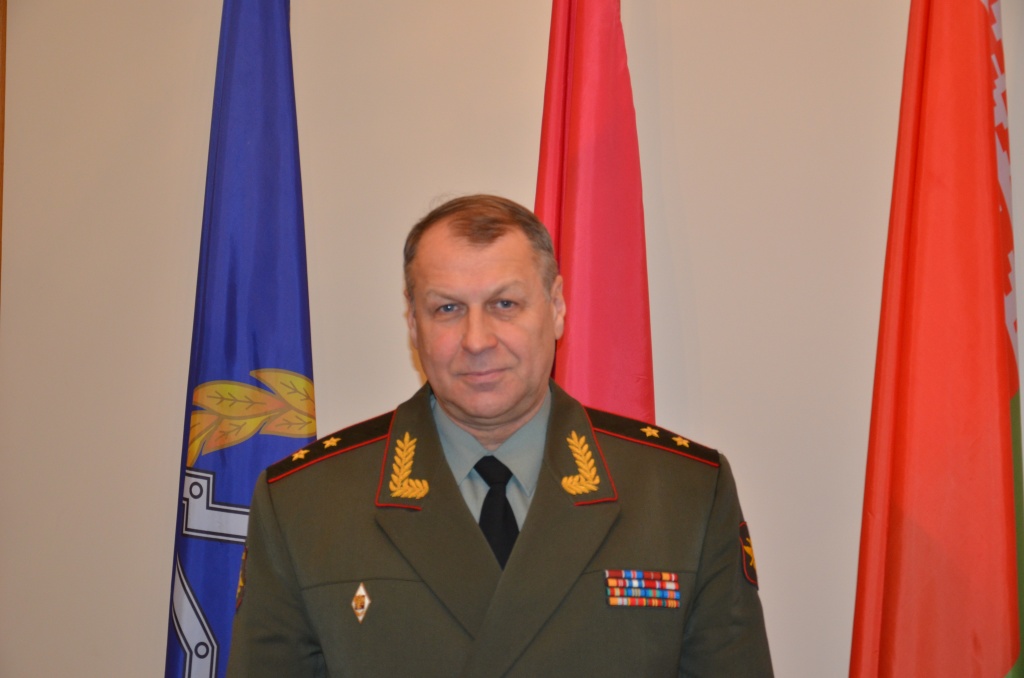 During this period, the CSTO activities focused on the development of the Collective Rapid Reaction Forces, the formation of the CSTO anti-drug strategy, the protection of the information space of the member states. In the framework of strengthening solidarity and mutual support of the CSTO member states, joint steps were taken on the most pressing problems of global and regional security. Collective instructions to the Permanent Representatives of Member States to international organizations are updated and approved by the Ministers of Foreign Affairs of the member states. Cooperation with the OSCE, the CIS, EurAsEC , SCO, ICRC, IOM is developing . The four countries ratified by the December 2011 session of the CSC CSCO are fundamentally important for strengthening allied relations and trust within the Organization - the Protocol on the deployment of military infrastructure in the territories of the member states of the Collective Security Treaty Organization.

In 2012, for the first time, exercises were held with units of the anti-drug departments of the CSTO member states (“Thunder — 2012”) at the “Geodesy” base training ground in the Moscow Region, as well as exercises with the Collective Peacekeeping Forces (“Indestructible Brotherhood - 2012”) in the Republic of Kazakhstan.

Operations Channel and Nelegal to curb drug trafficking and illegal migration, and PROXI in the field of information security, have gained international recognition.

The Kyrgyz side, which assumed the chairmanship in the Organization, announced its priority activities of the CSTO in 2013. On this issue in plenary made President of the Kyrgyz Republic  Almazbek Atambayev (Chairman of the CSC CSTO in 2013) . Kyrgyzstan’s priorities include:

- Interaction on the issue of control of the return transit of goods from Afghanistan in support of the ISAF through the territory of the CSTO responsibility to develop the mechanism of collective assistance of the CSTO member states in protecting the borders with Afghanistan. Including through the creation of a “belt” of anti-drug security around Afghanistan . Training of specialists of anti-drug departments of the CSTO member states using the capabilities of the Organization.

- Increasing the military potential of the CSTO member states in view of changes in the geopolitical situation in connection with the upcoming downsizing of the ISAF coalition forces in Afghanistan.

- Development of uniform requirements for the composition, structure, technical equipment, interoperability, training and financing of the CRRF and the peace-keeping forces  CSTO.

- Development and improvement of military-economic and military-technical cooperation. Implementation of the Target interstate program of equipping the RRF with modern weapons, military and special equipment and special means at the domestic (preferential) prices of the country of origin.

- Practical interaction in the aftermath of crisis situations, natural and natural.

- Creating a network of material reserves to assist victims of natural, man-made and military emergencies.

- Creation of a single information space for forecasting emergency situations and monitoring the situation.

In order to improve the functioning of the Joint Staff Collective Security Treaty Organization and taking attention to the importance of adhering to the principle of ensuring continuous and operational management of the day-to-day activities of the CSTO JH , the Collective Security Council decided to appoint the Chief of the CSTO Joint Staff on an ongoing basis, and approved in this position  Lieutenant-General Studenikin Alexander Igorevich (Russian Federation), relieving from this post the first deputy minister - chairman of the Committee of the Chiefs of Staff of the Ministry of Defense of the Republic of Kazakhstan Colonel-General Zhasuzakov Sakena Adilkhanovich . Was noted, Studenikin AI. has a high level of operational and strategic training and practical experience in the military unit and the central office of the Ministry of Defense of Russia, and also has knowledge in the field of international legal activity. 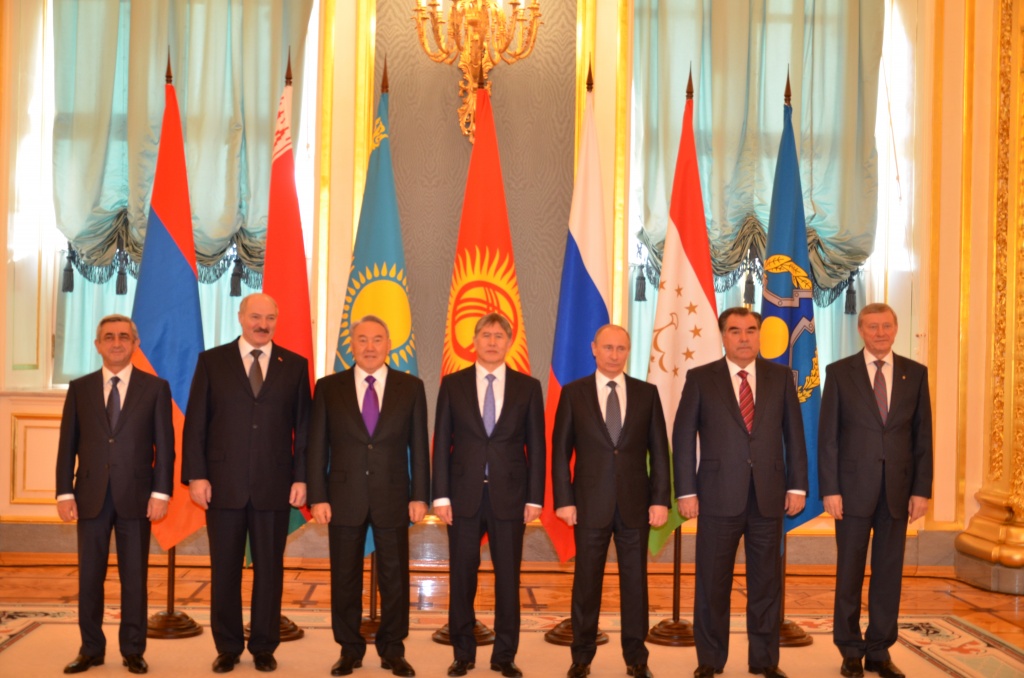 A total of 18 documents were signed at the session of the CSC.