Speech of the CSTO Acting Secretary General Valery Semerikov at the meeting of the UN Security Council on September 25, 2019 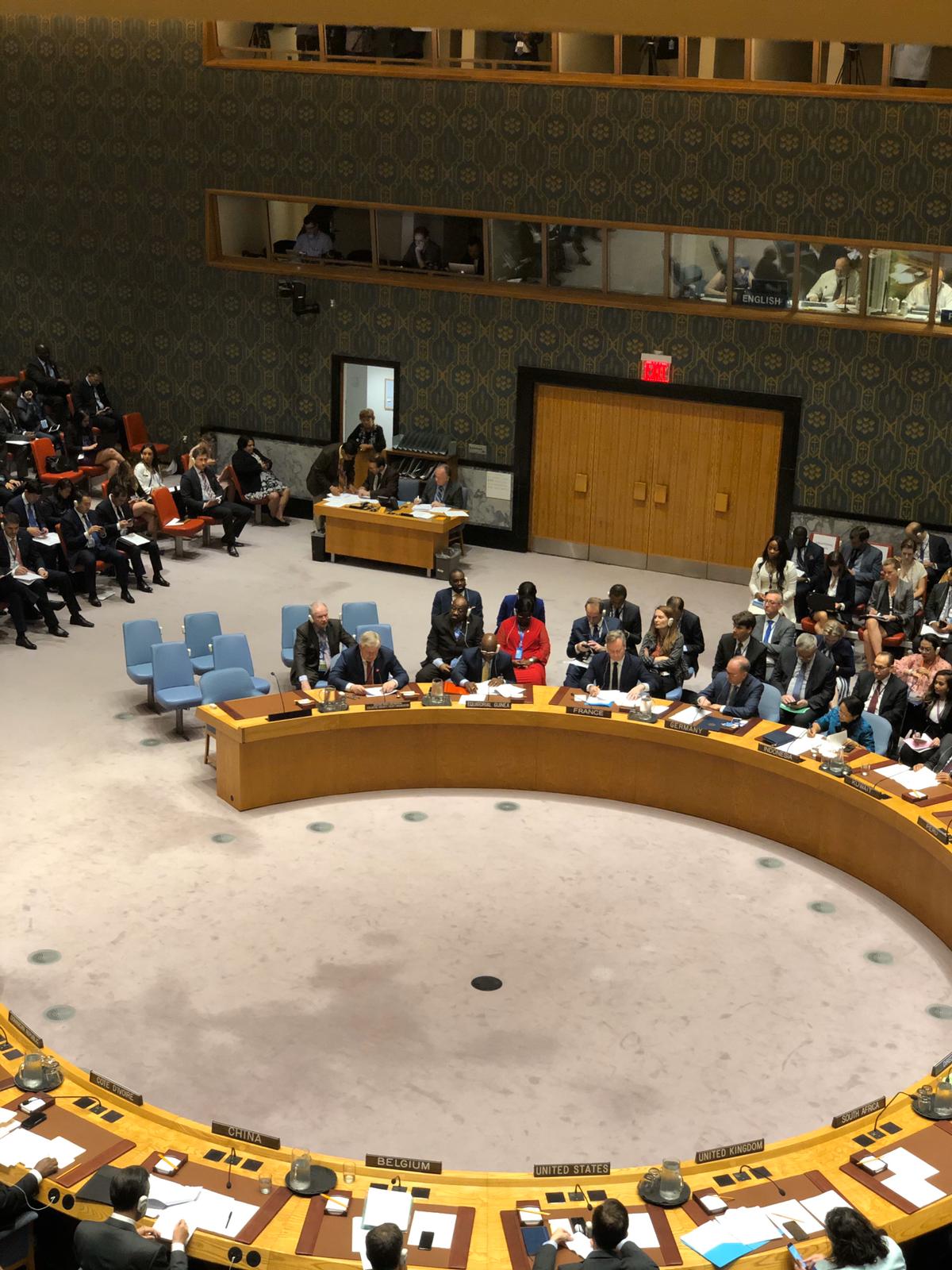 Dear members of the Security Council,

The assessment of our Organization as a partner in this interaction was given in the resolution “Cooperation between the UN and the CSTO” adopted by the 73rd session of the UN General Assembly. It notes that over the 25 years that have passed since the signing of the Collective Security Treaty, the Organization "has transformed into a multifunctional structure with the potential to adequately respond to a wide range of challenges and threats in its area of responsibility."

The collaboration is especially in demand today, when against the background of great conflict potential, the real danger of dismantling the existing architecture of international security, a crisis of confidence and confrontation, international peace is threatened by global terrorism, which has embraced a large geostrategic space, expanded the area of its actions, while using it in its subversive activities new technological advances, including information and communication technologies and social networks.

We consider it as a very important step in consolidating the efforts of the world community that Mr. Antonio Guterres has included the fight against terrorism in the priorities of his activities as the UN Secretary General and highlighted the promotion of wide international cooperation as one of the key areas in this work.

The fight against terrorism and extremism is one of the main components of the CSTO activities. Back in 2016, the heads of our states, having comprehensively examined the situation in the area of responsibility of the Organization, decided to implement a set of measures to counter international terrorism and extremism, which included a number of organizational practical measures, as well as political and military measures aimed at development of the CSTO’s anti-terrorist potential. As of today, we have implemented most of these activities.

Recognizing that the breeding grounds of terrorists and extremists is the illegal trafficking of drugs, weapons, illegal migration, we have increased the effectiveness of the special operational and preventive operations conducted annually in the CSTO format: “Channel” ("Kanal") to combat drug-related crime and “Illegal” ("Nelegal") to combat illegal migration. In 2018 alone, during these operations, more than 16 tons of drugs and various narcotic drugs of synthetic origin were seized from illegal trafficking, as well as 407 units of various weapons, 443 people wanted internationally were detained, 30 of them related to terrorist and extremist activity.

Taking into account the threats from the international terrorist organizations, we have strengthened our Collective rapid reaction forces with special units assigned for combating terrorists, and during the trainings with the CRRF we pay great attention to working out anti-terrorist tasks.

In order to further build up efforts in the fight against international terrorism, the CSTO is working to form an agreed list of organizations recognized as terrorist in the territory of our states. The scale, importance and necessity of this work can hardly be overestimated.

Responding to the threats associated with the return to the countries of origin from the "hotspots" of the Middle East of people who have undergone terrorist training and are participating in the activities of the international terrorist organizations, this year for the first time we conducted the special operation "Mercenary" ("Naemnik") in the CSTO format. Its purpose was to block the channels for recruiting the entry and exit of citizens of our states to participate in terrorist activities and neutralize the resource base of terrorist organizations in the CSTO space. Based on the results of its implementation, it can be stated that this operation showed its effectiveness, relevance, timeliness and was a direct concrete contribution to the implementation of the 2178 and 2396 UN Security Council resolutions.

The listed measures seem to us to be “the best practices” developed in the CSTO format. This is also evidenced by the interest shown by representatives of the relevant structures of the UN, the OSCE, the CIS, the SCO and experts from individual states, especially in matters of combating drug trafficking. Taking an active part in organizing and conducting these special operations and observing them.

In the interest of intensifying international cooperation to combat the spread of terrorist ideology and propaganda in accordance with the1624 and 2354 UN Security Council resolutions, we consider it necessary to combine collective efforts in the field of information security. We attach particular importance to promoting the development and early adoption under the auspices of the UN of universal rules, norms and principles of responsible behavior in the information space.

Dear members of the Security Council!

Dear participants of the meeting! Despite the measures taken by us to combat terrorism at the regional level, the CSTO member states, like other countries, are faced with more and more new forms and tactics of terrorist activity. In this connection, the Collective Security Treaty Organization Collective Security Council, in its declaration adopted in November 2018, determined that one of the priorities of the Organization is to increase joint efforts in the fight against terrorism and extremism.

Recently, we have noted with concern the attempts of certain forces to transfer terrorist activity to Central Asia and Afghanistan, to the southern borders of the CSTO member states.

The growth of terrorist acts of various kinds in Afghanistan demonstrates it. Accordingly, we could not help responding to this to ensure the security of our states in the Central Asian Region.

In particular, the SMFA, the CMD, and the CSSC prepared for the consideration by the heads of our states in November "A list of additional measures aimed at reducing tension in the Tajik-Afghan border."

At the same time, we intensified work on the development and adoption of the CSTO Targeted Interstate Program for strengthening the border of Tajikistan with Afghanistan.

Security issues in the Central Asian Region are reflected in the upd ated “CSTO Member States Collective Action Plan for the Implementation of the UN Global Anti-Terrorism Strategy for 2019–2021”.

Dear members of the Security Council!

Dear participants of the meeting!

The main lesson taught by all the accumulated experience in countering international terrorism is the need to step up collective efforts in the fight against terrorism without double standards and various exceptions, on the basis of rigorous implementation of the UN Security Council anti-terrorism resolutions and the UN Global Counter-Terrorism Strategy. We consider it important in this matter to act in accordance with the "Code of Conduct for a Peace Free from Terrorism," which was initiated by the Republic of Kazakhstan at the opening of the 73rd session of the UN General Assembly and recognized by most countries of the world (82 states).

On the whole, we are satisfied with how our interaction and cooperation with the UN Counter-terrorism Security Office and the Executive Directorate of the UN Security Council Counter-terrorism Committee within the framework of the existing memoranda are developing, and we support the expansion of this cooperation. We consider the contacts with the UN Security Council Sanctions Committees established by the 1267, 1373 and 1988 resolutions to be useful and effective.

I want to express special words of appreciation for the high appreciation of the CSTO activities in implementing the UN Global Counter-Terrorism Strategy, as se t out in Resolution 73 of the UN General Assembly session on cooperation between the UN and the CSTO.

We see great potential in ensuring security in the CSTO area of responsibility in consolidating the efforts of international and regional organizations.

Sometimes it turns out that the players in world politics in the regions behave more autonomously, which makes the processes in different regions less unified. In this connection, there is a need, along with an analysis of the problems of international security on a global scale, not to lose sight of the uniqueness of the processes occurring in the regions. Figuratively speaking, the study of “small-scale” maps should be supplemented by work with more detailed and “large-scale maps”.

To conclude my speech, in the context of consolidating the efforts of the world community, international and regional organizations to counter terrorism, I would like from the rostrum of the UN Security Council to appeal to the Ministers of Foreign Affairs of the member states of the North Atlantic Treaty Organization to consider and respond to the Public message of Foreign Ministers of the CSTO member states on building confidence and developing cooperation in jointly countering global challenges and threats. This appeal was adopted by the CSTO Foreign Ministers Council in May of this year and distributed in the UN. We do not give up hope of being heard.

Thank you for your attention