Kommersant: "The troops are ready for peace. The CSTO Chairmanship has passed from Kyrgyzstan to Russia." 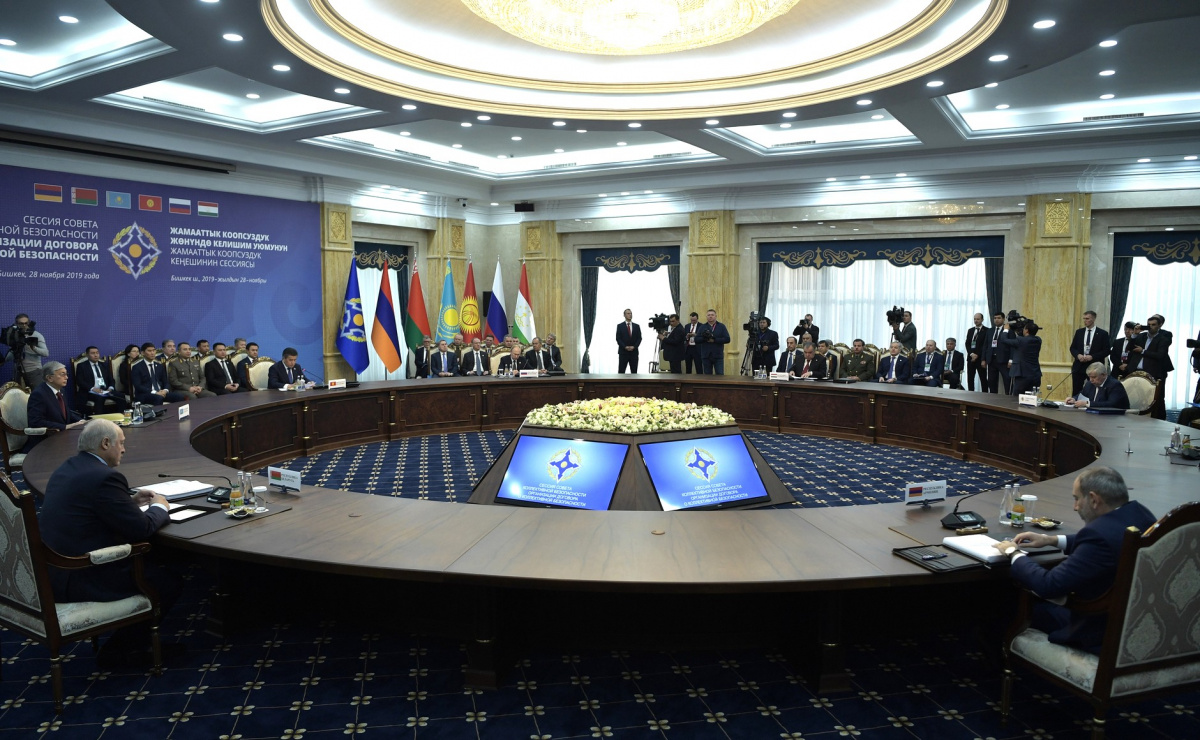 
One of the priorities of Russia as the new chairman of the Collective Security Treaty Organization (CSTO) is "maintaining high readiness" of its peacekeeping forces. This was announced by Russian President Vladimir Putin at the CSTO summit in Bishkek. Back in 2017, Moscow proposed that the military of the countries of this bloc strengthen the UN peacekeeping missions in South Sudan and Chad, but then it was not possible to agree on the initiative. Moscow is counting on a positive solution to the issue in 2020. Achieving another stated goal - "expanding the circle of friends" of the CSTO - is more problematic. The organization already called NATO “to friends”, offering the alliance to establish cooperation, but did not receive an answer.

“A complete understanding has been reached on all issues on the agenda,” said President of Kyrgyzstan Sooronbai Jeenbekov, moving from a narrow-format meeting to an expanded meeting. Now behind the backs of the leaders of Armenia, Belarus, Kazakhstan, Kyrgyzstan, Russia and Tajikistan, who gathered at a round table in the presidential residence “Ala Archa” near Bishkek, there were ministers of foreign affairs and defense, as well as secretaries of the Security Councils.

The solemn mood of the Kyrgyz president was easy to understand: Bishkek’s annual chairmanship in the military-political organization passed, in general, without excesses, except for the recent incident on the Tajik-Uzbek border. Recall that on the night of November 6, 20 masked militants attacked the Tajik border outpost Ishkobod. According to the investigation, the criminals, members of the Islamic State terrorist group (banned in the Russian Federation), entered from Afghanistan.

Sooronbai Jeenbekov in his speech did not focus on this incident. But he reported on successes: "active work was done to increase the international authority of the organization" and to strengthen military-economic and military-technical cooperation, the combat readiness of the participating countries was increased, and military exercises were held. “The CSTO is the only guarantee of security in Central Asian countries,” ex-speaker of the Kyrgyz parliament, MP from the SDPK faction Chynybay Tursunbekov enthusiastically told Kommersant. “If it weren’t for the CSTO, terrorists would have attacked our borders long ago.” Although they periodically try to check their capabilities. The recent situation on the Tajik-Uzbek border is a prime example. ”

At the summit, President Jeenbekov handed over to Vladimir Putin a rod with the CSTO symbols - Russia became the new chairman of the organization. The Kyrgyz leader in his speech noted “Russia's efforts to ensure the security of the entire Eurasian region” and highlighted the September exercises of the Russian Armed Forces “Center-2019”. “I observed the active phase of the exercises using the most modern technology in Orenburg, I personally saw the power of Russian weapons and was impressed by this,” he recalled his trip and summed up: “We can be calm beyond the external borders of the CSTO member countries.” Vladimir Putin nodded shortly.

In response, the Russian president unveiled plans for the presidency.

It is transmitted in alphabetical order, but successfully for Moscow this time coincides with the anniversary celebrations dedicated to the 75th anniversary of the end of Great Patriotic War.

“We are waiting for the leaders of the organization’s member states at the celebrations in Moscow on May 9, 2020 and are grateful for supporting the idea that the military contingents of all CSTO countries take part in the Victory Parade on Red Square,” said Vladimir Putin.

“Russia will help expand the circle of friends of our organization through the development of cooperation with all interested states and international associations,” the Russian leader continued.

Meanwhile, not all international organizations are ready to join this circle: in May, participants in a meeting of the CSTO foreign ministers invited NATO to conduct joint consultations. But there was no positive reaction.

The deeper cooperation within the organization looks much more real. Vladimir Putin assured: Moscow is ready "to share the experience of the anti-terror gained in working in this area in Syria." The CSTO Press Secretary Vladimir Zaynetdinov specified in a conversation with Kommersant: “For the second year, various elements were worked out by the collective forces in the exercises, taking into account the use of the experience of the Russian armed forces in Syria. In particular, this is a fight against groups of militants that broke through the "jihad mobiles", as well as the use of drones against gangs. "

In addition, as Vladimir Putin said, in Moscow’s opinion, “issues related to building up the CSTO’s peacekeeping potential and maintaining high readiness of the peacekeeping forces require special attention.” According to Kommersant’s Russian diplomatic source, back in 2017, Moscow proposed that CSTO troops strengthen UN peacekeeping missions in Africa, but failed to agree on an initiative. The interlocutor of Kommersant hopes that it will be possible to formalize the participation of peacekeepers in such missions during the Russian chairmanship.