RU
EN
Search
From the Treaty to the Organization CSTO Structure Management Secretary General Deputy Secretary General Chief of the CSTO Joint Staff Documents Photo Video Contacts
Photo exhibition News One victory for all Photo
Photo exhibition News One victory for all Photo
05.12.2022
The CSTO Secretary General will participate in the 15th meeting of the CSTO Parliamentary Assembly
01.12.2022
Plenipotentiary Representative of the Republic of Belarus Alexander Grinevich was elected Chairman of the CSTO Permanent Council
24.11.2022
On November 23, in Yerevan, the Collective Security Council has discussed current problems of international and regional security and their impact on the security of the CSTO member states
24.11.2022
On November 23, in Yerevan, at a joint meeting of the CFM, the CMD, and the CSSC, important political statements on international security, the fight against terrorism, and condemnation of attempts to glorify Nazism were adopted
18.11.2022
Meeting of the Coordination Council of the Heads of the Competent Authorities for Countering the Illicit Drug Trafficking of the CSTO member states was held in Yerevan 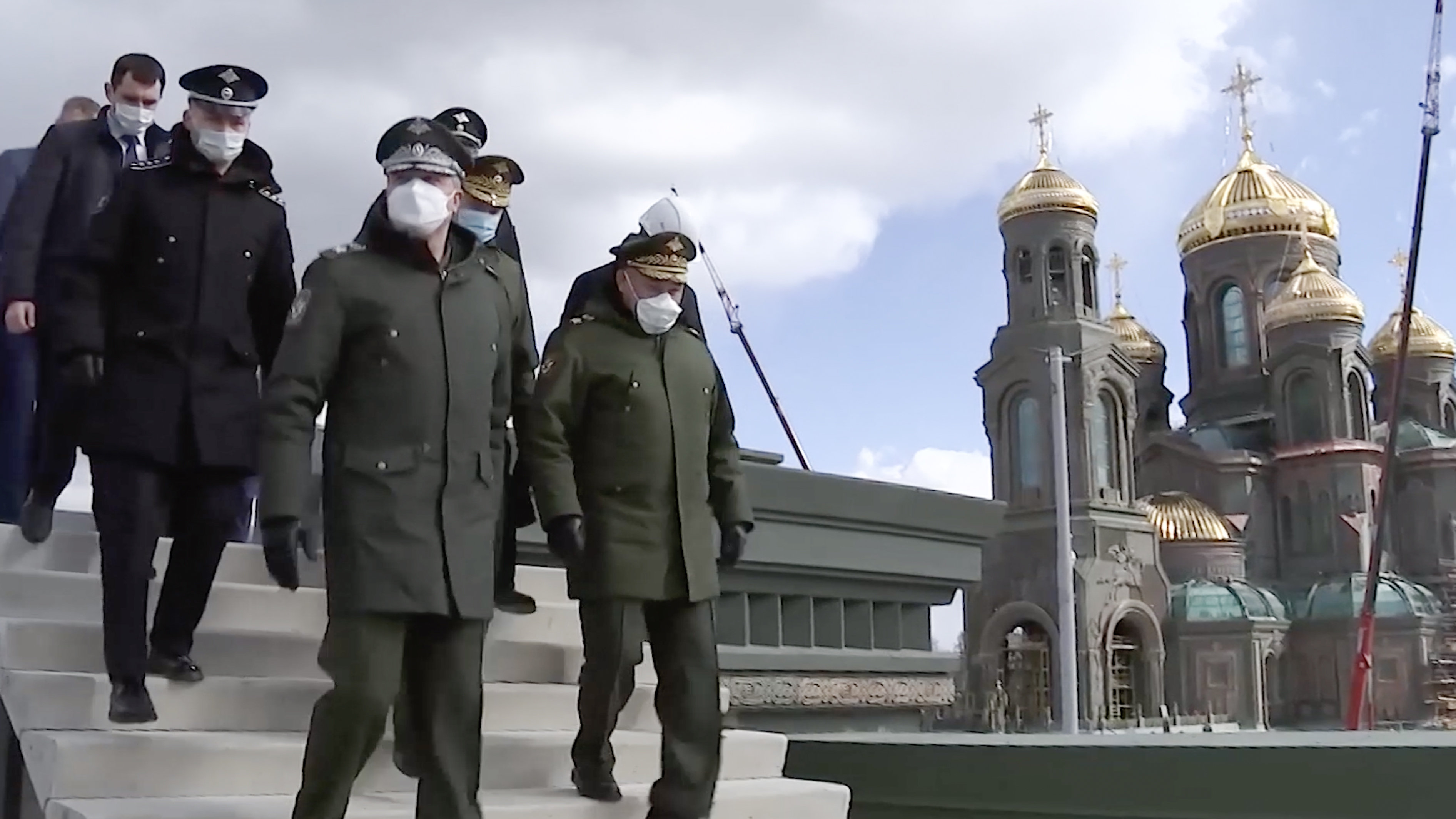 On April 22, in the “Patriot” park near Moscow, Russian Minister of Defense Sergey Shoygu, along with Metropolitan Juvenaly of Krutitsy and Kolomna, inspected the progress of construction of the main Temple of the Armed Forces of the Russian Federation. The Temple is being erected in honor of the 75th anniversary of the Great Victory in the Great Patriotic War. They were convinced that "at present, specialists, working, in fact, around the clock - are completing the interior and exterior decoration of the Temple."

“The lower, that is, the small Temple is almost completely ready,” The Information and Media Department of the Military Department said, “As for the details, the decoration is made of ceramics and decorated with Gzhel painting, and pieces of glass smalt were used in the manufacture of mosaic panels. In addition, for the first time in history, the central apsis dedicated to the Resurrection of Christ is made in the form of a metal relief. The unique decoration of the Temple, the icon and the iconostasis are made of copper with enamels, as was done on marching military icons. 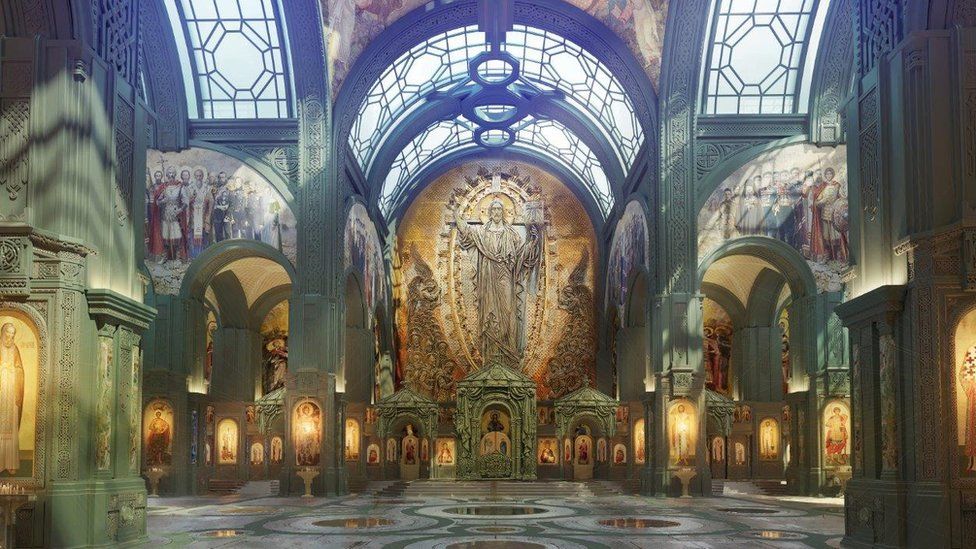 The Ministry of Defense also asked to pay attention to the unique vaults of the Victory Church, assembled from stained-glass windows depicting orders that were awarded for feats of arms at different periods of Russian history, as well as a mosaic Holy Image of the Savior Not Made by Hands in the central dome of the temple. This is the largest face of Christ in the world, its area is 300 square meters. Artists collected this image for four months, and it took about a hundred kilograms of gold leaf to create it.

At the upper point, under the face of Christ, Metropolitan Juvenaly of Krutitsy and Kolomna performed a short сhurch service, consecrating this giant mosaic.

After inspecting the progress of the decoration work, the Minister of Defense held a joint meeting of artistic and technical councils on the construction of the Main Temple of the Armed Forces at the “Patriot” Congress and Exhibition Center. 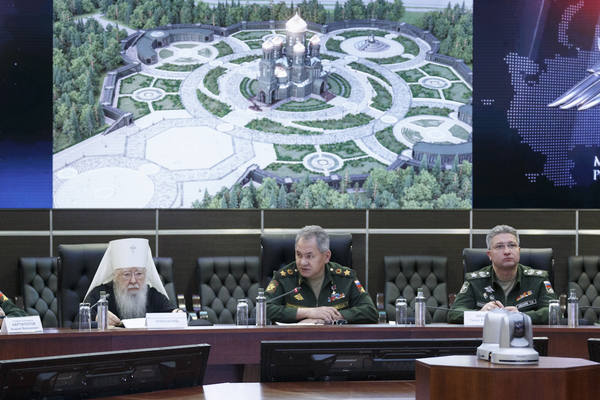 “2020 has been declared the Year of Remembrance and Glory,” Army General Sergey Shoygu said, opening the council. - The opening of the Great Victory Church was coincided with the 9th of May. Over its creation, we worked all together. Construction organizations, creative workshops, and defense manufacturers made a great contribution. Hundreds of thousands of our fellow citizens - from the President to the ordinary citizen - transferred money to a special fund. We also all together once erected the Cathedral of Christ the Savior, which became a symbol of the triumph of the Russian Army in the Patriotic War of 1812.

Sergey Shoygu also added that "the anniversary celebrations in honor of the 75th anniversary of the Great Victory in the “Patriot” Park will attract the attention of a huge number of people not only in our country but also abroad." This, according to the Minister of Defense, "rest a special responsibility on us and requires everyone to give themselves completely."

In addition to construction and decorating, Minister of Defense General Shoygu and Metropolitan Juvenaly of Krutitsy and Kolomna examined the museum complex “The Road of Memory”. This is a truly unusual historical site. Data on front-line soldiers is collected at military, on the website of the Ministry of Defense, as well as at special data collection points that are open in Moscow and other cities. According to the Ministry of Defense, more than 15 million photographs have already been collected, and the flow of priceless photographs of the front years has kept coming and coming.

“The Road of Memory” is a unique project that will perpetuate the feat of 33 million participants in the World War II,” Sergey Shoygu said at a meeting of the council. - All of them - our near and dear ones, front-line soldiers and home front workers - day after day selflessly brought closer the victorious spring. To tell about them means to immortalize their names, to preserve the history of their families, our multinational Motherland. We will continue collecting information and after May 9, so that as many people as possible can find out about the heroes of the war and there are no blank spots on “The Road of Memory”.

Another important object examined by the Minister of Defense was the Open Air Museum "The Victory Field", which is a reconstruction of the battlefield upon the defense of Moscow in 1941. The reconstruction was recreated from archival documents and photographs of that time. It is worth noting that the place for the construction of the Main Church of the Armed Forces of the Russian Federation and the mentioned museum complex “The Road of Memory” and “The Victory Field” was not chosen coincidentally. The fact is that upon the World War II it was here that one of the lines of the Moscow defense line passed.

- This is exactly the military line. And nearby is Alabino, where there was the Moscow defense staff, which was headed by Zhukov, Sergey Shoygu reported, - And there were very serious, very important, first positive events, our first successes began. I will not list and talk about the heroic deeds that were accomplished there. It’s important here to understand that, when one comes to the Temple, he must feel what we want to give him by creating this structure. I mean not only the Temple, but the most valuable remembrance. I think that by joint efforts, all together, we will succeed.

We also note that on the initiative of Sergey Shoygu here, in the central square next to the Temple, an old granite milestone will be installed. It will personify a certain starting point and the beginning of the movement of the Red Army to the West.

It is also interesting that the steps of the Orthodox Cathedral are cast from the captured Wehrmacht military machinery.

- We took the track layers from the German tanks, in these steps they are present in the form of an alloy. In fact, we are treading on the weapons of the defeated enemy, ” Sergey Shoygu said.

And there is a few more words about the Temple itself ... It was designed in a monumental Russian-Byzantine style. The cathedral will be the third largest after the Cathedral of Christ the Savior in Moscow and the St. Isaac's Cathedral in St. Petersburg. Its height along with the cross will be 95 meters. According to the project, each of the aisles of the Temple complex is dedicated to a saint - the patron saint of one of the military branches and Aerospace Forces and Airborne Forces, the aisle of the holy great martyress Barbara - the patroness of the Russian Strategic Missile Forces, the aisle of the holy Apostle Andrew the First-Called - the patron saint of the Navy and the aisle of St. Alexander Nevsky - the patron saint of the Land Forces.

Here it is important to emphasize that the construction of the Main Church of the Armed Forces of the Russian Federation is a continuation of the tradition of erecting military Orthodox churches in Russia. Here the icons of the patron saints of Russian soldiers, heraldic signs will be placed. The cathedral will be decorated with murals from battle scenes from military history and texts from the Holy Scriptures. The vaults and panels here are mosaic, all on the theme of baptism - “baptism of the Lord”, “baptism of Knyaz Vladimir”, “Christianization of Rus'”. The floor inside the Temple will be made of cast iron, and it will be decorated with cards of the battles of the Great Patriotic War. The Central Temple Icon is truly unique for the iconostasis of the Cathedral with the Holy Image of the Saviour Not Made by Hands - it is painted on an old board, which once was part of the carriage of the Peter the Great times. The carriages, along with a cannon of the 1710 model, were recently lifted from the bottom of the Neva River on the beam of the House of Peter the Great.

In the erected Temple was originally laid much symbolic. For example, the diameter of the cylinder of the main dome is 19 meters 45 centimeters. It is made in honor of the end of the 1945 war. The height of the belfry is 75 meters - that is how many years have passed since the day of the Great Victory. The height of the small domes is 14 meters 18 centimeters - and we know that the Great Patriotic War lasted 1418 days and nights. By the way, the length of “the Road of Memory” is the same figure – 1418 steps. This is the number of steps that must be taken to go through and look around the whole composition ...